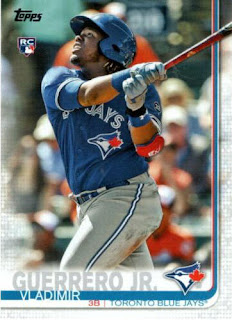 I got this card purchase fairly quickly, but the seller was probably doing cartwheels when the card was sent out - I thought this might be a hard to pull short print like the 2018 Topps Series 2 cards of Gleyber Torres and Ronald Acuna Jr.

However, pulling this supposed SP of the rookie slugger has fairly been easier than anticipated and values have dropped accordingly - with the card not being numbered as part of the flagship set [even if the number would be shared with another player's regular card], is this just another rookie-year card and not a definitive, must have?

There here was definitely some FOMO on my part and at times, I want to throw money into a card that might be a keeper - but when I don't use common sense, do some basic research, I'm prone to an impulsive purchase. 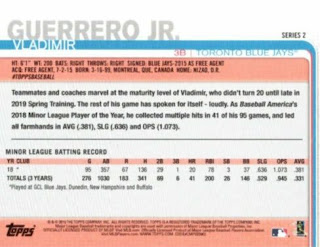 Maybe the bottom line here is Topps gave something for collectors to chase in 2019 Topps Series 2 - with the idea, they can still issue a regular Guerrero Jr. rookie card [with corresponding parallels] that is going to be chased in their late season Update Series.
Posted by Laurens at 4:18 PM
Labels: 2019 Topps Series 2, eBay, FOMO, random, Toronto Blue Jays, Vladimir Guerrero Jr.

Wonder who convinced the non-collecting corporate suits to actually make a Vladdy Jr. card relatively accessible to the general public like that. Of course, this just muddies the waters for short prints and official rookie cards.