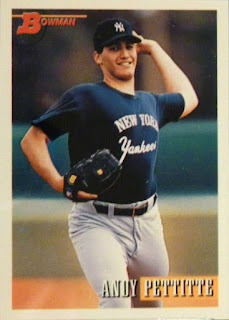 I'm trying to pick and choose to add certain scratch the itch rookie cards - many of the rookies I'd like to add to my PC come from the junk wax era years through the UV coated era years of the mid 1990s, so while I want to add a card here and there, I don't want to go 'all-in' on a big shopping spree outright.

I picked up Pettitte's rookie, because the lefthander is considered one of the Yankees' all-time greats as part of the Core Four [Derek Jeter, Mariano Rivera, Pettitte and Jorge Posada] - there might be a case to be made for Pettitte to get into the Hall of Fame, even if was a PED guy with one-time pal Roger Clemens.

I've always thought Pettitte was a No. 3 or No. 4 starter who was ultimately more serviceable than dominant for a New York Yankees dynasty through the late 1990s - he was an innings eater, who pitched in important games during the Yankees' postseason runs through October.

On the other hand, while things weren't always in Pettitte's control - he gave up too many hits and his ERA always seemed inflated.