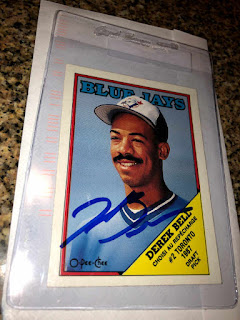 On forums or other social media, I see other autograph collectors' 'brag posts' as far as what they get - there maybe more purchases and/or private signing stuff mixed in with the usual TTM successes.

Perhaps I want to fall in line and condition myself to accept a new reality - where I end up purchasing more autographs ‘here and there’ as a viable option to get some new scratch the itch curiosities in my collection.

I turn my nose at most of the send-in signings for the rank and file or semi-stars I've gotten TTM or in-person at some point over the past 20 years - but 'Operation Shutdown' was someone whom I never had the opportunity to get, a decent player through the 1990s, with a bunch of cards that made me familiar with him.

A promoter on Facebook was selling extras from a past signing and I thought about getting a card - I was looking for a more unique card, maybe a rookie issue and one of the cards shown in the F/S post was a 1988 O-Pee-Chee.

I realize no one really cares, but I'm vaguely familiar with the odd draft pick card only included in the Canadian version of Topps - if I had to break the bank [$10 plus $1 PWE shipping] to purchase a random signed Bell card, the OPC would the one I wanted.

Go figure, I might have actually liked to send into a Bell signing - he’s on a 2001 Fleer Tradition, a set I'm still trying to get cards signed from, in-person or TTM.