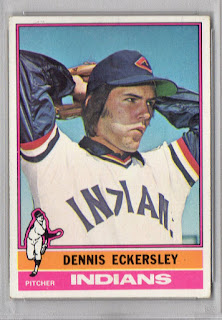 With the help of $10 and change in eBay Bucks, maybe picking up this graded [PSA-5] old-school rookie card was more palatable than going modern - I wanted a 2019 Topps Update Gold Keston Hiura #150, but the chance of getting one before spring training starts might be over.

I ended up settling for Eckersley since it was on my watch list, which may help guide me towards alternatives to think about - though a card added to ‘my list’ might not be available anymore or perhaps ‘my list’ may not reflect what I might want at the moment.

Eckersley wasn’t exactly ‘one of my guys’ or someone I seriously considered a ‘national star’ but I was vaguely familiar with Eck’s narrative - as a guy who battled substance abuse problems and was a floundering veteran starting pitcher before coming under Tony La Russa and Dave Duncan’s tutelage in Oakland during the mid 1980s.

While Eckersley was a goat a few times in postseason play [1988 World Series and 1992 American League Championship Series] - he was one of the GOATS for the run he had as a dominant, one-inning closer through the early 1990s and maybe Eckersley getting to the Hall of Fame made me take a second look at how he turned things around.

Long affiliated with the Boston Red Sox as their TV broadcasts color guy, Eckersley has had run-ins with Jackie Bradley Jr. and David Price because he doesn’t have a filter at times - I didn’t know Eckersley has a brother in prison and also an adopted daughter who is otherwise homeless.

Nice grab. I just spent my eBay bucks last week on something nice too. I love this Eck Rookie. I picked one up at the COMC Black Friday sale, but yours is in better shape for sure. Thanks for sharing!