Some assorted odds and ends

I was looking on doing something on Christmas eve and found some cards online - I ended up with these to amuse me as part of a 27-card order that was mostly 1984 Donruss base cards for my partial set build of sorts.

The holiday mail was a cluster, so I had to wait 3 or 4 weeks for these cards to come in from an online seller - these were not the most important thing in the world to fret about, but in my little space, might represent some sort of lifeline as far as having something to look forward to. 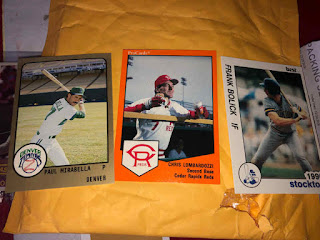 Around this time, Mirabella was a big league veteran who had intermittently pitched in the minor leagues - when a big league opportunity wasn't quite there for him.

1989 ProCards Cedar Rapids Reds Chris Lombardozzi #935 - this was a scratch the itch card I had to get my hands on, where the 6-year minor leaguer is pictured along the dugout railing with an Arby's roast beef sandwich and a drink in his hands.

1990 Best Stockton Ports Frank Bolick #7 - I don't think the one-time late 1990s Anaheim Angel has cards picturing him with the team, but I wanted to have a pair of cards to send to him in a possible through the mail autograph request. 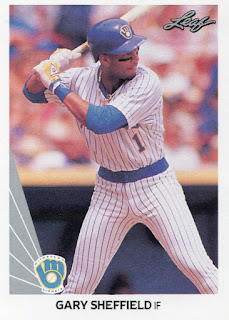 1990 Leaf Gary Sheffield #157 - when he really had his first superstar season with the San Diego Padres nearly 30 years ago, this may have been his best mainstream card along wish his 1989 Upper Deck rookie card. 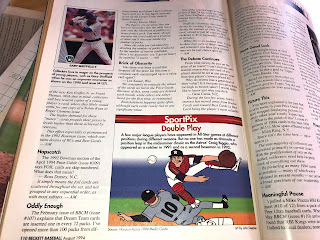 Through the junk wax era, there might have been a distinction where if a player's rookie cards were from your typical Topps, Donruss, Fleer or Score brands - there might a premium attached to something like Sheffield's first card [but really a second year issue] from a high-end, in-demand set that came of age through the early 1990s. 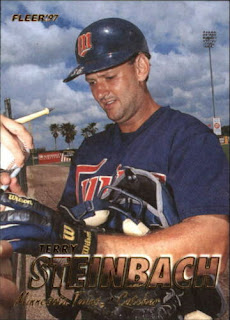 1997 Fleer Terry Steinbach #540 - I tried to make sure this was the card that pictured him as a Minnesota Twin where he is signing autographs; the inking it up version is an update from his other card in the set, still picturing him on the Oakland Athletics.
Posted by Laurens at 4:02 PM
Labels: 1989 ProCards Cedar Rapids, 1990 Leaf, 1997 Fleer Tradition, Arby's, Chris Lombardozzi, collecting topics subsets, Gary Sheffield, mini-collections, Paul Mirabella, random, Terry Steinbach

I know he played in Minnesota for a few seasons... but it's so weird not seeing him wearing an A's jersey.

The Lombardozzi is fantastic. I need to get my hands on one myself.