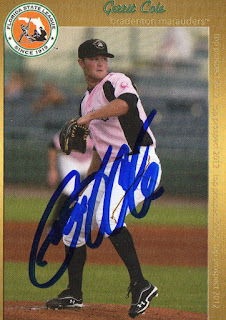 This space was for a featured autograph of Cole that was going to my Angels all-time autograph collection - how the Angels had brought home the local kid as the centerpiece for an Angels rotation that had fallen on hard times, yadda, yadda, yadda.

As is, after choosing to pick their spots over the past 5-6 years, maybe the New York Yankees decided to keep things real and get their man - there have been supposedly guys that have wilted under the New York spotlight, but if I’m a Type-A personality getting paid the biggest money, I want the challenge of playing for the Yankees.

The Angels can’t really compete in selling itself like the Yankees can and even with baseball's top player, they are a sleepier team - though not everything is glitters with gold, the Yankees now have the legitimate ace to lead them into a deep postseason run. 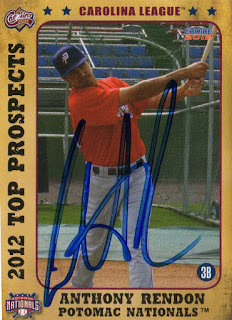 Despite the need for pitching, the Angels instead got the best position player on the free agent market - while lineup protection maybe a myth, having another all-world hitter like Rendon adds considerable pop to a lineup featuring Mike Trout, Shohei Ohtani, Justin Upton, etc.

Signing Rendon doesn't solve the sore need for pitching and the Angels might as well have blown it with Cole signing elsewhere - but they made their big splash move to improve the team and that's a big deal.

The Angels are that much better now with Rendon on the team - mission accomplished, thought it's stupid to assume the Angels front office is done trying to look for a serviceable No. 2 or No. 3 arm [preferably a couple of them] to sign or trade for.

Before the Winter Meetings I was hopeful that Cole would sign with the Angels and turn down the Yanks. But if they want to burn another third of a billion dollars on one guy, let 'em.

That said...can I interest you in a David Price to anchor the Angels rotation? :D