Some finds off a card show appearance #1

With my external exposure to collecting mainly limited to online activity - I wanted to check out a card show that seemed fairly close by, but had only been put together a couple of times within the past year as something new.

When I got to the spot, I was relieved that there were vendor tables setup and this might have been a show where I could work with - it wasn't a big show, though I didn't know where to start at first.

I'm not as particular with my priorities, so I didn't know whether to stop at someone’s 'booth,' particularly when the person's face manning the table looked to be a little long - I didn't want to make like I'm wasting someone's time digging around 'just looking' with nothing concrete in mind.

Even if I had to share some personal space, maybe I'd be more comfortable getting lost among other collectors browsing around - while the show wasn't completely dead, the lack of foot traffic was pronounced. 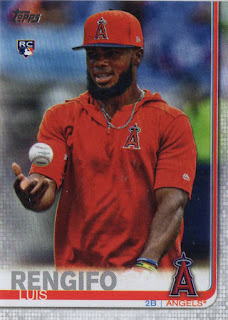 As it goes, all it takes is one booth with a some boxes of cards to rummage through - I didn’t know if I wanted to build a small pile of cards at this first initial table, but I stuck around after finding a 2019 Topps Update Luis Rengifo RC #US105. 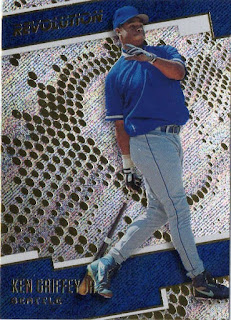 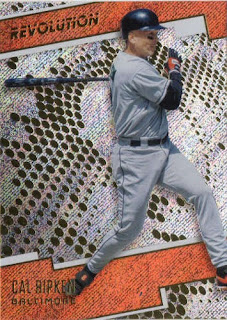 I thought these dollar cards were parallels, but they might be base cards - still anything that pops like featuring guys I generally collect might be keepers as binder material. 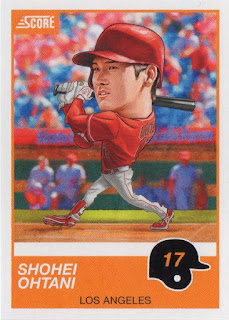 2019 Panini Chronicles Score Shohei Ohtani #20 [$1] - maybe it's because the players are depicted as caricatures, but I wasn't in love with the cards mimicking the 1989 Score football design mashed up with the 1991 Score All-Star subset cards. 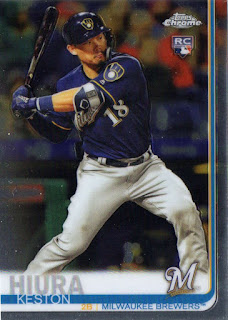 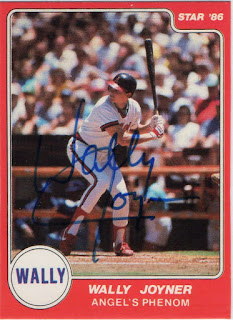 1986 Star Wally Joyner with an autograph [$2] - I didn’t know I needed this, but may have been odd enough that I grabbed it; I think the autograph is good, though it's been over 30 years since Wally World was relevant for anyone to care either way.

During a spring training trip this past year, I actually didn’t recognize Joyner as an Angels guest instructor - but got him to sign a card when I realized who it was. 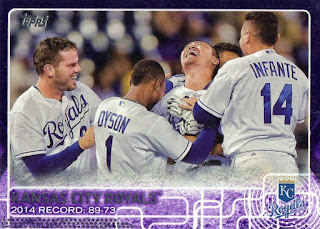 2015 Topps Toys“R”Us Kansas City Royals team card #258 [$1.00] - if this had been the base card, I'd probably skip it over thinking it maybe too common to pick up outright, even if it was a probable mini-collection need.

Still, I have to make allowances not to overthink things and make various parallels [in this case, a store exclusive one] of base cards keepers - if they are as 'special' as this almost NSFW celebration card, featuring one-time Kansas City Royals legend Nori Aoki being swarmed by his teammates. 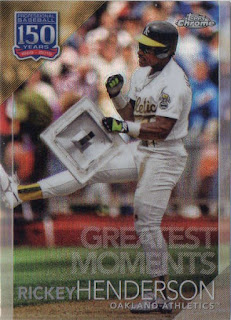 2019 Topps Chrome Update Rickey Henderson 150 Years of Professional Baseball #150C-4 [$0.50] - whether or not it happens, I usually expect to pull current year cards rather than buy them outright, though the image makes this updated version of an insert from the flagship set a keeper.
Posted by Laurens at 8:40 PM
Labels: card show trip, inserts, parallels, random

Love that Joyner autograph for $2.