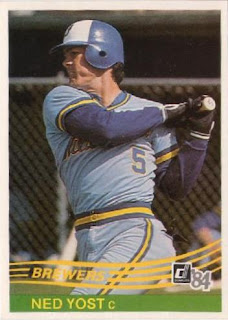 I was wondering, having been at Milwaukee Brewers' spring training the past two seasons - how a team goes from coming together during the spring, working out in Maryvale [bullpen sessions, pitcher's fielding practice, batting practice, position players actually taking infield] and having a regimented plan, to the part of the season, where the team is out of it.

The past few years the Brewers have steadily gotten better - players like Prince Fielder, Ryan Braun, J.J. Hardy, Cory Hart, Bill Hall [to a certain extent] started to blossom and a renewed sense of purpose was realized.

Under this guy's leadership, the Brewers were supposed to be in the playoffs in 2008 - now, he has been fired and my five-cent investment on this card I picked up on Sunday is kaput. I was hoping to see him during next year's spring training and possibly get his autograph. Maybe he'll be an analyst for TBS or ESPN during the playoffs during this postseason.
Posted by Laurens at 3:18 PM
Labels: fired, impatience, Milwaukee Brewers, Ned Yost