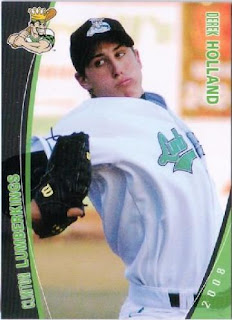 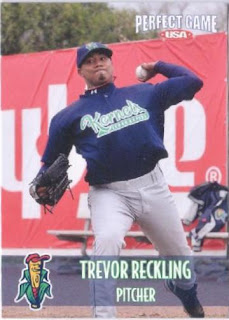 I'm looking for some 'new' cards to get autographed in-person and received a couple of minor league team sets I purchased from stb1 on EBay - it was a 2008 Cedar Rapids team set and a 2008 Clinton Lumberkings team set.

Many of the players who played for those teams naturally advance one level up to their respective minor league teams in the California League - for Cedar Rapids players, they move up to Rancho Cucamonga [which essentially is my 40 minute away 'home team'] and for the Clinton Lumberkings players, they move up to the Bakersfield Blaze [which I see next month at Rancho].

I like minor league team sets but they are sort of outdated 'trading card relics' of yesteryear - meaning they are more novelty products these days rather than something you would hoard for value.

I usually stick whatever Bowman/Tristar/Donruss/Just prospect cards I can get - however, the team sets give you the rank-and-file players and not just the top prospects.

The Cedar Rapids set was in a 'loose' team bag of sorts with a haphazard placed MiLB logo - I don't know if it came packaged like this. Several of the top left corners on the first few cards were dinged with white corners. I'm not really going to compain but take note. The cards were arranged in numerical order, though I don't know if they came that way.

The Clinton Lumberkings set was sealed in plastic with a haphazardly placed MiLB logo - the cards look like they are in better condition, though as the case with minor league cards, the card stock is really thin.

These team sets often include the training staff and a novelty I've read about - is chasing down those individuals who have cards in these sets.

While I don't have much experience with team sets, I always hear grumblings about how expensive they are either to buy from the teams themselves or through stb1 - I'd probably agree, though I like the novelty of having cards for players to sign, especially if they don't have Bowman/Tristar/Donruss/Just prospect cards out yet.

Too bad Trevor Reckling got promoted already - I'll probably see him at the end of the year in Anaheim though, if he continues to pitch well.