A shot in the arm - Matt Palmer 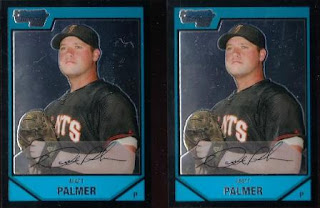 I'm not going to say I knew much about Palmer - other than a random guy whose autograph I got in spring training. He seemed accomodating and friendly.

One of the fun things about collecting autographs - is getting one of someone who maybe in the minor leagues, who may not be nowhere close to being a prominent member of your 'home town' team, but who contributes later on.

It is some credit to the Angels' organization - they find a guy like Palmer or Shane Loux and give them a legitimate opportunity to contribute. One of the great qualities of manager Mike Scioscia is the ability to find use out of the last guys on the 25-man roster. If you are called up, you aren't merely there to fill up a roster spot.

Now, Wood is 24 years old and who can ever think being 24 is somehow a step away from not making it in any profession - the young man does need to play in order to see if he is an all-star talent or is going to disappoint.

I'd like to say Wood isn't the uber prospect anymore destined to be a superstar - I tend to believe if Wood had a career path similar to Evan Longoria, David Wright or Ryan Braun type, he should be in second or third full season in the Major Leagues already.

However - it just seems like he has made some strides to fix some holes in his swing and he does have legitimate 30 home run power. As much as the Angels put faith in 30-year old journeymen, they need to do so in a guy who still can be a franchise player for the next five or six years.

Since this has turned into an Angels' round up of sorts -

1.) Bullpen implosion - I was hoping Brian Fuentes would give the Angels a different look out of the bullpen, but I want K-Rod back. It seems like the 2009 group has been one big fail.
2.) Wanting to dump Erick Aybar - his nickname is 'Failbar' on a fan site I visit, though I don't get the impatience other than he is a little, speedy, punch-and-judy type of hitter who sometimes gets careless on defense.
3.) Pitching staff - have holes like Swiss cheese, but Ervin Santana and John Lackey look to make some rehab starts next week.
4.) Gary Matthews Jr. - this guy didn't come cheap a few years ago, this guy then got implicated for purchasing HGH and was demoted to being a fifth outfielder before the 2009 season started. As is however, he has the opportunity to show he can still perform on a regular basis.
5.) Loss of Nick Adenhart, Courtney Stewart and Henry Pearson - I really cannot forget what happened as we try to move on while Jon Wilhite [the lone survivor of the crash] continues to struggle in fair condition.
Posted by Laurens at 4:52 PM
Labels: Los Angeles Angels, Matt Palmer, pitching, shot in the arm