2004 Topps Traded break
I knew Topps didn't have any nice hits in their 'base brand' products like Topps Traded, but with some money, I bit the bullet this past Saturday and picked up a box for $50.

I was hoping to pull some Howie Kendrick cards [base, gold, chrome, refractor] but ended up with a 'pitiful' break.

Chrome - a handful of chrome FY/DP and veterans with the best one out of the FY/DP bunch a Homer Bailey.

I’d like to pick up single signed baseballs for still living Baseball Hall of Famers (and probably those that will pass on the next five years). I want to prioritize guys I have not absolutely gotten or tough to wrestle an autograph from (high profile superstars, doesn’t sign memorabilia at golf tournaments). Otherwise I have to stick to what I have (8x10 flats, unofficial baseballs, scrap of paper) until I can upgrade to a single signed baseball.

'Traditional Rookie cards' - BGS/PSA graded [and some ungraded] rookie cards of players from the last 25 years and before.

Turn back the clock sampler run - I’m planning to collect a run PSA graded Topps cards from 1952-1980. Ideally all cards will feature Hall of Famers, though that probably depends on condition [affordability] and availability.

Material card bonanza - featuring a bat barrel or 'premium super patch' piece card of a superstar (Vladimir Guerrero) or an icon/legend; a popular HOFer and/or member of an exclusive statistical club. 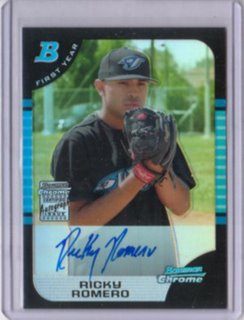 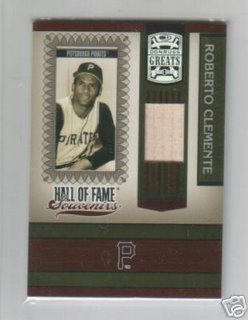 Of course it looks like a Clemente bat card is a fairly common pull in 2005 Donruss/Playoff releases.

Still, this is Clemente and possessing a card with a sliver of a bat he used in a MLB game is just too cool.

Image is from the Ebay auction I won.
Posted by Laurens at 11:40 AM No comments: 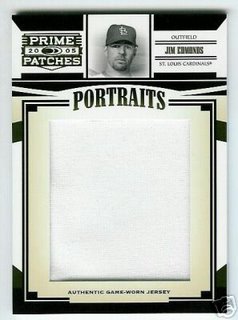 There is something nice about having a card in your hand with a big swatch of a game-worn jersey - even though the material is only a one-color piece and not a patch of some sort.

Image is from the Ebay auction I won.
Posted by Laurens at 2:49 AM No comments: 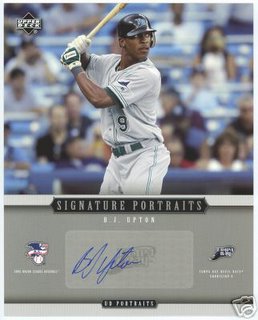 Even the autograph is not on the oversized card itself, but on a sticker, the way the card looks is pretty darn good.

Image is from the Ebay auction I won.
Posted by Laurens at 11:30 PM No comments:

Bought a Casey Kotchman unlicensed head shot 8x10 photo for a $1.50 each - I wasn't paying attention at all and I didn't realize it was kind of mangled up. I guess there goes my $1.50 in the trash...also bought a Paul Konerko 1998 Studio 8x10 card for $1.50 as well - I guess the Konerko was in a little better shape.

There was booth with a guy selling wax...Bought a pack of top-loaders for $1...I was biding my time, knowing that I kind of hate to spend [my own] money, but had to pay the piper every so often [even as I have other items I'd like]. I impulsively tried my luck, even though I think I'd rather buy random retail packs, than from a card show booth [no matter how well the booth's display looks].

2005 Topps Update [x3/$4.50 total] - a handful of base cards including those featuring young players that I can get an get signed if I so desired. Three of them included Ricky Romero [Toronto Blue Jays/CSUF], Andrew McCutchen [Pittsburgh Pirates] and Cliff Pennington [Oakland Athletics].

2005 Bowman Draft [x3/$9 total] - I was hoping for something decent, but not expecting much. I did get a 'dreaded' Signs of the Future auto [of Angel Guzman - Chicago Cubs].
Posted by Laurens at 11:37 PM No comments: 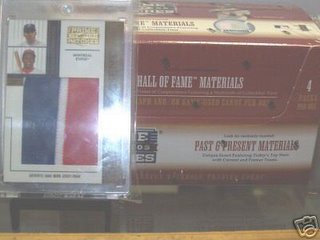 Mail Day
Two cards arrived in the mail on Saturday:

2005 Prime Patches jumbo jersey card of Vladimir Guerrero [$22.61 plus $2.99 s/h on Ebay] - nice looking card for my personal collection, though the three color [blue, white and red] material is part of the color scheme of the patch piece as opposed to perhaps a true 'super patch' card, where the colors consist of discernible patch material. So, the card is basically a one color swatch that happens to feature three colors. [Does that make any sense?] 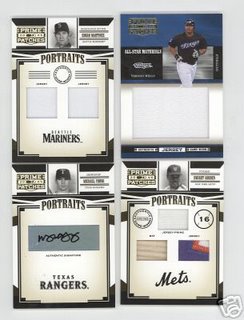 2005 Prime patches jumbo material card of Vernon Wells [$0.99 plus $2.50 s/h on Ebay] - I was surprised at how thick the card stock was - this is really nice looking card [though a default pull these days - single color jersey swatch - ugh...] with just enough space on the jersey material to get autographed perhaps.


Images are from the Ebay auctions I won.
Posted by Laurens at 3:26 AM No comments:

Grassroots collecting
I wish I could go pick up and bust some unopened boxes as a collecting ideal:

It doesn't take much to pique my interests as a baseball card collector, especially when it is the middle of winter and there is no real MLB baseball to follow. Part of collecting is the materialistic aspect of having cards in your hand [can be at any time during the year], part of it is following a sport during the season.

Still, there are so many trading card releases coming out - the caveat is making concessions because I can't collect everything. I want to gamble on some unopened boxes featuring cards that might be valuable - rookie-year parallels of pretty good prospects, but I don't want to be caught up in not being able to make a move [on a single card/box] because I've blown my wad before better shit has come out.

I want to make smart moves with such a small 'collecting budget.'

I'm not looking for significant pulls, but if I want to buy a product - it will be for the cards themselves and not some secondary, arbitrary reason like looking for base cards to get signed in-person or through the mail.

I think rookie-year parallels [such as refractor/numbered cards] have the most potential value as far more common pulls out of products featuring prospects and rookies [particularly position players as opposed to pitchers].

As far as other cards, I need to get low-end cards on the cheap. I think it would ideal to collect insert cards [featuring superstar players, Hall of Famers, et al] such as parallels and game used cards but they aren't too desireable because they are considered redundant, default pulls.

I need to defer to the others as far as the early hype is concerned [busting boxes of a new product] and make my own moves to add selected cards from the latest products in my collection.

I need to pick up singles with modest goals such as acquiring a particular player's rookie card without expectation of value. I want to 'represent,' even though at times, I may not have the most valuable card of a player.
Posted by Laurens at 3:00 AM No comments: 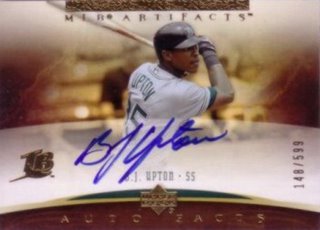 Mail Day
A 2005 Upper Deck Artifacts B.J. Upton certified autograph insert card [$2.99 plus $2.25 s/h on Ebay] finally arrived in the mail. I paid for this card at least three or four weeks ago [by cash] but it was held up somehow until I received card out of the blue.
Posted by Laurens at 11:30 PM No comments:
Newer Posts Older Posts Home
Subscribe to: Posts (Atom)