I don't feel like I can relate to collecting baseball cards right now because I've just gotten too lazy [in life] to care about them and I have these things going on in my mind - where I'm ambivalent towards my collection of baseball cards.

I think at times I say, 'I'm too cool for cardboard,' since I live within 30 minutes of a Major League Baseball team and going to games takes up most of my leisure time [tough life] - and perhaps any sort of spending money I may spent for actual baseball cards is used to pay for tickets / gas perhaps and food.

Back when I first started to collect, 15 or 20 years ago, I could never have imagined to get my little pieces of cardboard signed by the players shown on the cards - now I've got cards to sorted out by MLB teams with some knowledge of getting them signed on somewhat regular basis [whether it is cards featuring a college player, professional player from the minors to the Majors and even some retired guys].

Perhaps I'm not so eager to secure something for my 'personal collection' and I'm not as enthused buy into the hype of new releases - I'm a fickle baseball card guy as far as budget is concerned and I don't need another fancy set-builder product like Topps Chicle with unopened boxes around $80.

Then again, I kind of see collecting baseball cards in a different, nostalgic, way when I read this - What He Left Behind

Posted by Laurens at 1:08 AM No comments:
Labels: baseball cards, links, meanderings, nostaglia 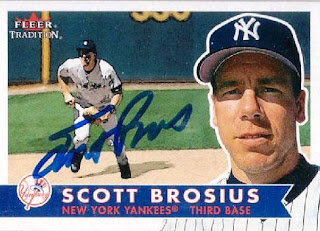 I first got Scott Brosius' autograph in-person when he played for the Oakland Athletics back in 1996 - I ended up not collecting in-person autographs in 1997 and Brosius got traded to the New York Yankees after enduring a subpar year.

After a comeback season, including being part of a 114 win team and being named 1998 World Series MVP - Brosius had enjoyed some new prominence and got kind of elusive perhaps [for a good, but generally average MLB player] and I remember seeing him last in 2000, when he was getting dropped off at alternate players' entrance at what was then Edison Field in Anaheim.

I never got him on a 2000 New York Yankees team baseball I was working on back then - it was far from complete since I know Derek Jeter wasn't on there, but it was still from a championship season.

After a doubleheader on Saturday, I was able to get Brosius to sign the 2000 NYY team baseball [which features luminaries like Lance 'One Dog' Johnson and Todd Erdos, but missing Jose Canseco, Jeter, Ricky Ledee among other players I still need] - more importantly I also got a 2001 Fleer Tradition set card [I'd been holding off on actually sending with a donation to Brosius' baseball program] signed. 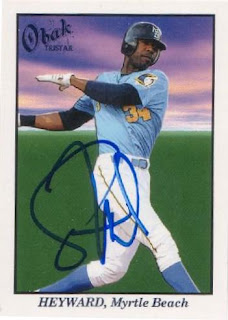 I had an idea of who Jason Heyward was before he exploded onto the Major League Baseball scene this season - I'm hoping he follows in the footsteps of this guy as far as a baseball phenom who took the league by storm and as far as anybody can tell, hasn't ever looked back.

I got the 2009 Tristar Obak card signed in-person last year in the Arizona Fall League - which is the place to go to watch baseball's next star performers. 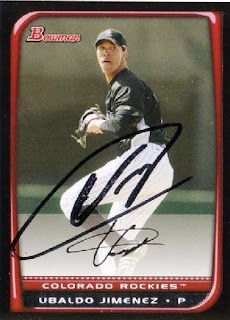 Ubaldo Jimenez doesn't have much of an autograph - but I don't think his penmanship isn't much of a concern for Colorado Rockies fans who were treated to watch him throw the organization's first no-hitter.

These are no secrets, but on his good days, it seems Jimenez seems like he has no-hit stuff - he is also a big and strong guy who doesn't seem to get gassed as he gets into the later innings of a baseball game. 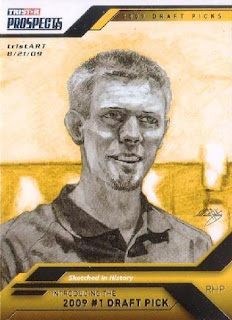 Even though the cards feature the same Stephen Strasburg sketched image [which makes him look a little sickly, a little ghostly] - just for novelty's sake, I was happy to pull a base card, a short print variation card [pictured, has a box around the card number on the back] and an Obak Update card of the professional pitching phenom.

2009 Tristar Projections [20 packs per box, six cards per pack] - I think I'm still making up for a month during the off-season when I was out of the country and having just a little leftover spending money [after spring training] is giving me some confidence in picking up various packs / boxes.

I was able to pick up a box of 2009 Tristar Projections for around $40 [during a special through a place that does blow out prices on some boxes / packs] - I didn't get a free preview box, like a number of card bloggers have, but these cards maybe the most attractive of Tristar's Prospect Plus series.

In the end, these are still minor league cards, ones not officially licensed by Minor League Baseball - but once I finally had the cards in-hand, I may actually like these better than the 2010 Topps Pro Debut.

While the logos on the players' uniforms are edited out, it isn't as much of a distraction because the cards' graphics look pretty clean with foil stamping used - though it maybe subjective, the images are generally sharp with backgrounds washed out [at times, it seems like images on cards are cluttered up by stuff in the background].

Collation may not be a card company's responsibility, but it feels so good to be only one card short [#78] of putting together the 100 card base set - sorting the cards isn't as messy if I don't have too many doubles / triples to deal with.

It looks like I got my 11 hits out of the box, including four different autographs - these cards have been out for perhaps four or five months already and I'd read some initial 'box bust' reports where people were getting four autographs of the same guy out of a box. 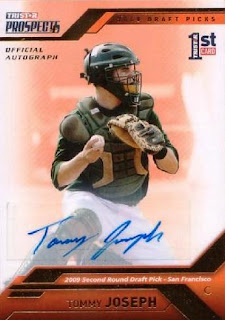 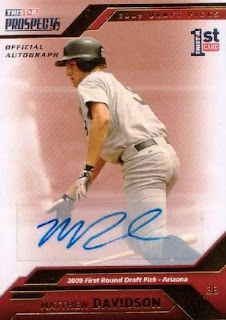 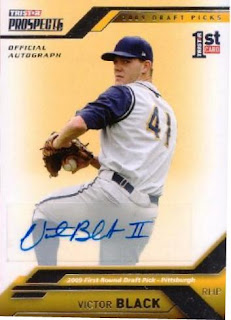 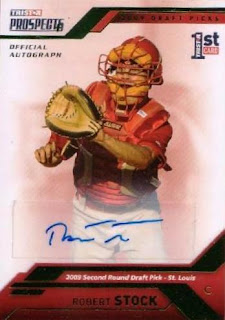 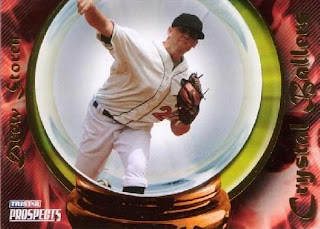 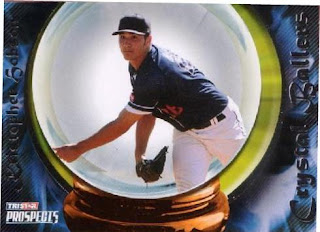 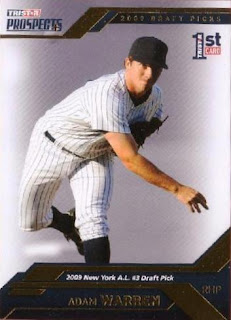 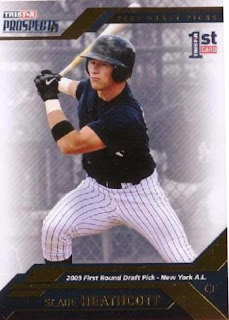 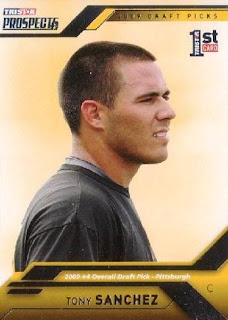 #4 Tony Sanchez - SP variation card with a box around the number. 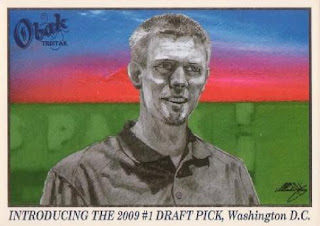 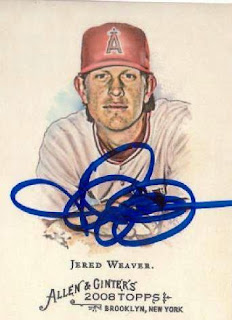 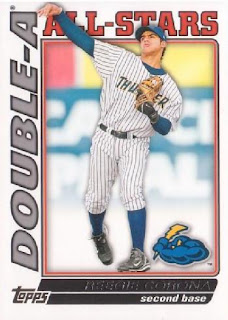 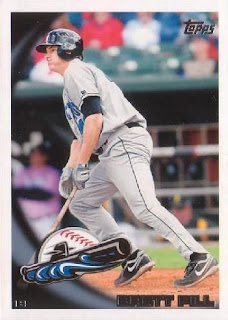 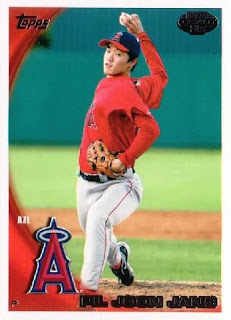 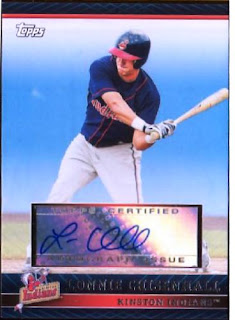 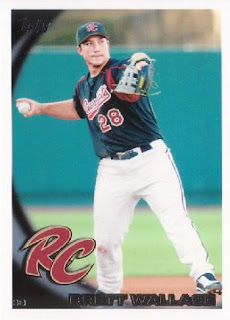 #SA-3 Jimmy Paredes - Single A All-Stars
#8 Brett Wallace - Wallace is pictured with Oakland's AAA team in Sacramento, though he was traded to the Toronto Blue Jays during this past off-season.
#137 Jason Van Kooten
#179 Damon Sublett 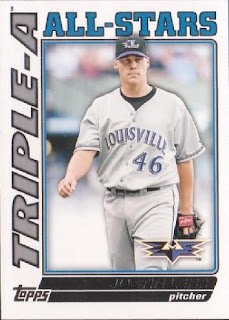 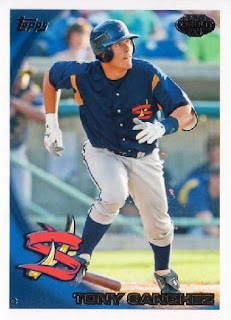 #154 Tony Sanchez - the No. 4 overall pick in the 2009 amateur draft by the Pittsburgh Pirates.
#TA-23 Justin Lehr - Triple-A All-Stars; journeyman style, since Lehr has pitched in 77 games in the Major Leagues, but has bounced around professional baseball otherwise.
#74 Jose Alvarez
#138 Jeff Malm - I know he's been on at least one Upper Deck printed USA card.
#22 Derrik Gibson
#169 Tony Delmonico - I don't know much about him, except he is in the Los Angeles Dodgers' system and is currently catching after being drafted as an infielder. I know that much because I have his 2008 Donruss Elite Extra Edition card and was looking him up to see who he was because I thought he was with the Angels [wrong]. 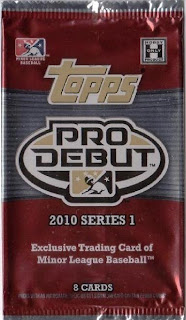 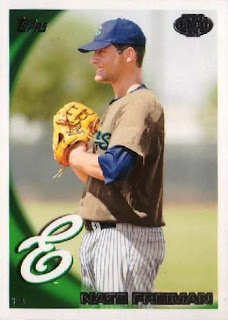 Pack one [eight cards per pack] - I bought five packs of these and had to get my fix of these new Topps minor league cards, even though I overpaid to the tune of $4.99 per pack. 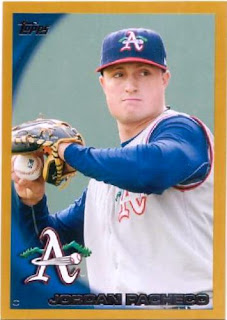 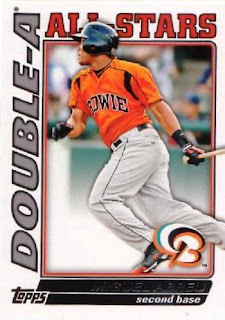 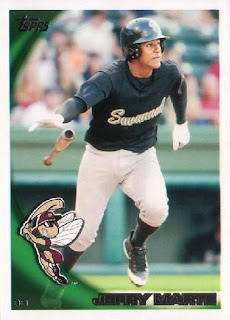 #25 Jefry Marte - I like to 'sound out' the names of players with 'funny' spelling names like a 'Jefry.' I think the explanation I've heard during baseball broadcast is mistakes are often made when recording names on birth certificates in the Dominican Republic i.e. 'Jhonny Peralta.'
#213 Mark Sorensen
#118 Pedro Figueroa

I plead ignorance as far as knowing who these players are - though the point of picking up packs of Topps Pro Debut I rather than Topps MLB is to kind of figure who the next up-and-comers are or at least have cards [to get signed in-person or through the mail] in-hand of minor leaguers who may play in the Major Leagues one day [or not]. 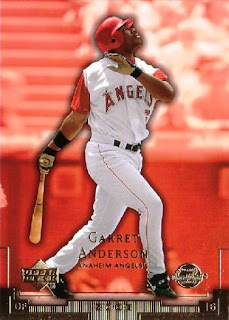 Garret Anderson hasn't been with the Angels in two years - he was an Atlanta Brave in 2009 and will be looking to prolong his playing career a little bit more in 2010 as it looks like he's made the Los Angeles Dodgers' Opening Day roster [along with one-time Angels starting pitcher Ramon Ortiz].

Unlike a pinch-hitting specialist like Matt Stairs perhaps - even at 37, GA still has the ability to be a position player on the field [either in left field or maybe first base] as opposed to being strictly a one-dimensional guy off the bench who is looking to get that one key hit, late in a game.

He's probably made too many outs at the plate and maybe his counting numbers are a little overrated since he was never a guy to work pitchers into deep counts, so he could walk - however, I've liked him as a player because of his ability to put the bat on the ball to the tune of 2501 hits.