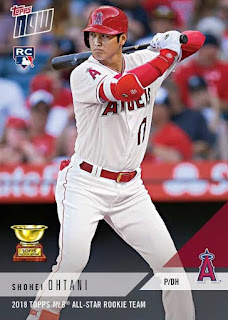 I went ahead to see if I could pick up the Topps Now Shohei Ohtani cards I'd missed out on [these two cards and his Topps Now Rookie All-Star team card] - between the end of the season up through when he was honored as the American League Rookie of the Year a couple of weeks ago.

I’m still looking to build on my Ohtani Topps Now run through his rookie year but have held off picking up any one particular pack pulled card - the pitcher is out until 2020 and whenever Ohtani comes back in 2019, he'll be literally half a player at DH. 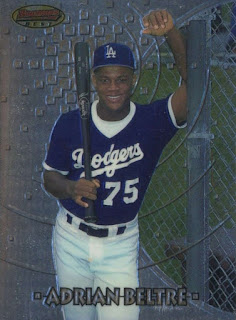 I wanted a Beltre rookie card and grabbed this as an impulsive purchase to squirrel away - the 1997 Bowman Chrome RC #182 is the one to have, but maybe I’ll wait a little bit before seeking that one out.

This maybe a condition sensitive card as chrome cards from the 1990s tend to ‘hulk’ when exposed to the weather conditions - the copy of the card I picked up doesn’t appear to be discolored, though I have to account for when it happens.

Admittedly for the longest time, up through when the retiring Beltre was gunning for his 3,000th hit - I didn’t think much of him as having the numbers to merit any sort of serious consideration for the Hall of Fame.

I’ve always thought he was a minor star at best who lucked into a flukish season in 2004 - after collecting his 3,000 hits in 2017 and passing Rod Carew in 2018 as the all-time Latin American hits leader, Beltre's baseball playing accomplishments have the substance as he looks to become a first ballot Hall of Famer in five years.

Accounting for his all-world defense, the hitting numbers and the quirkiness he’s occasionally exhibited, Beltre has become a fan favorite to be goofed on in good fun - he didn't he like his head touched by his teammates and he had one of the most exaggerated follow throughs on his swing.

He and Texas Rangers teammate Elvis Andrus never get tired of messing around with each other - Andrus seems to be Beltre’s best friend on the field, but also his main antangonist. 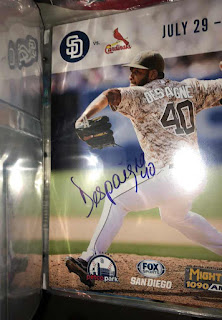 Despaigne wasn't ever going to be a star, but the Cuban righthander had a promising rookie season in 2014 with the San Diego Padres - after leaving the Padres, Despaigne has hung onto professional baseball as a journeyman and had an ugly 8-game stint with the Angels this past year.

In 18 2/3 innings pitched, Despaigne allowed 17 earned runs, walked 11 hitters and was battered around for 30 hits - he elected to be a free agent and will probably be pitching in Mexico, Japan or Korea sooner than never.

Whatever he does with the rest of his pro career, he'll always be an Angel to me and was nice enough to sign back in the day - at the very least, the autograph of his I already had on some sort of Padres game day scorecard, can be listed as part of my all-time Angels autograph collection.