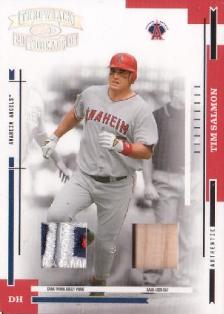 Featured Pickups
I'm always looking to pick something nice and cheap at the card show, just so I can say I walked away with something decent [if only a $5-$10 card] besides the common cards I usually pick up for random autograph signings.

I looked through a $10 arrangement of cards and Tim Salmon patch/bat card [from 2004 Donruss Throwback Threads] caught my eye immediately. My mind raced, deciding whether I would be willing to pay $10 for a card of a minor-star at best. He's a freaking Angels' legend, you dolt! atch/bat combo serial numbered 16/25. The patch on the card isn't that big [because of the window], but it is distinct. The card is numbered 16/25 and was labeled 'prime' meaning that it was more than just a single swatched jersey/bat card variation.

I came back, flipped through the arrangement of cards again and finally picked the card up. $10 isn't a bad price for a 'semi-premium' card of a franchise star, even though it has been a decade or so, since he has been talked about in mainstream collecting circles. Still, I consider it a card you pick up for your personal collection that isn't going to make or break any collecting budget, unless of course you can get it for something like $6.27 shipped on Ebay [just being facetious there].

In the $10 arrangement, I didn't see much, but some real random cards that piqued my interest for whatever reason: a 2005 Fleer Sweet Sigs Vernon Wells, a random Allan Houston [NBA] patch card that was really nice and had eye-appeal, a random Jason Kidd autograph card [you can get his certified autograph cards for $10?] and an 2005 Donruss Timelines Andruw Jones patch card.

Another Salmon card I found was a 1995 Donruss Studio Gold insert. The faux credit card design gives it a certain aesthetic appeal, though the card is only worth what I paid for it, which is about a dime. I picked it up with a Barry Larkin from the same set for a quarter. 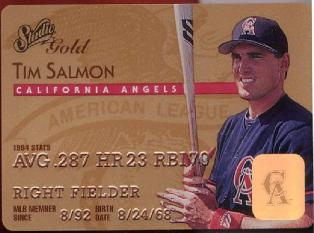 Scanned to show the image of the card, not the particular condition or actual size.