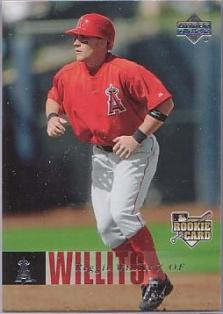 Anatomy of a Fan Favorite: Reggie Willits
1.) Has to be middle-America to represent what the average baseball fan appreciates on a day-to-day basis.
2.) Has to be unique - for a time, Willits had a batting cage in his bedroom.
3.) Can't be a 6'3'' and 240 pounds - must be a runty guy.
4.) Must exude some confidence, despite apparent lack of stature.
5.) Must remind fans of the old school player, doing the little things to win and earn his keep on a Major League roster.
There has been backlash over the last several years with the Los Angeles Angels of Anaheim's 'Latinofication' of its nucleus of players, with names like Vladimir Guerrero, Orlando Cabrera, Bartolo Colon littering the roster [as key free agent signings] as opposed to guys like Tim Salmon, Troy Glaus, Darin Erstad and David Eckstein [essentially home grown].
Local fans in the 'OC' eat up stories of a 'unique' guy like Willits, since he has the complexion and the game they can identify with now. If you are an Angels' fan that goes to the game, more likely than not, the shirt you'll see that 'chic' fan wearing is that of Willits' and not of Guerrero, Cabrera, Matthews or Anderson.
Coming into the 2007 season, Willits may have been considered as the fourth or fifth outfield option if he made the team. Given an opportunity to play early in the Major Leagues, Willits has not given the Angels an opportunity to doubt his ability as a catalyst in their lineup.
In 290 at-bats so far, Willits has an impressive .402 on-base percentage with 49 walks against 53 strikeouts. He has stolen 22 bags while being caught six times. He has collected 88 hits, including 14 doubles and scored 50 times.
Right now, the 26-year old Angels' rookie star has provided the team with a sparkplug, obviously reminiscent of recent former Angels like Erstad and Eckstein.
The card pictured is his 2006 Upper Deck Update rookie card. His first professional card seems to be his 2003 Upper Deck Prospects Premiere XRC, a card produced months after he was drafted.
I remember picking up the 2003 Upper Deck PP XRC for $0.50. I didn't think much of it then and I thought Willits was going to be a player that isn't likely going to stick in the Major Leagues for a prolonged period of time. With his start so far, is it too late to be a frontrunner and get on the bandwagon?
Posted by Laurens at 11:12 PM No comments:
Newer Posts Older Posts Home
Subscribe to: Posts (Atom)