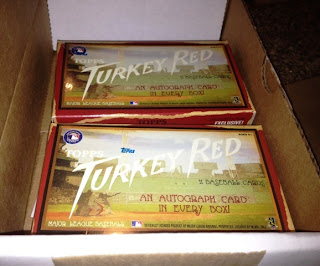 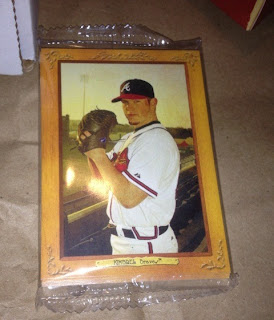 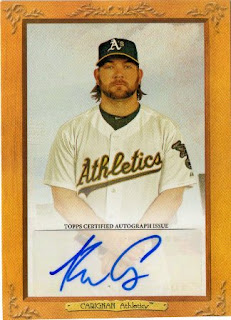 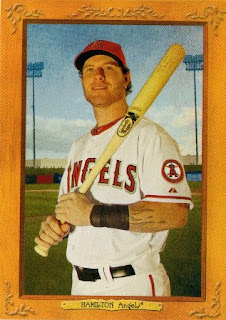 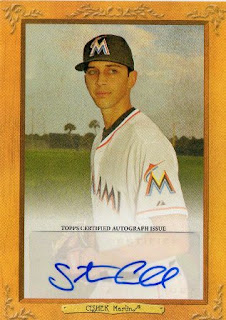 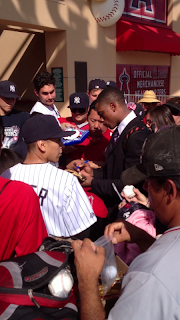 It sucks when a player like Granderson has to miss a considerable amount of time because of an injury - he's always been a pretty accomodating autograph signer when as a whole, MLB players are conditioned to say 'no' or be typically oblivious towards autographs collectors of any sort [once they reach the majors and gain some sort of prominence].

When the New York Yankees played the Angels in 2012, Granderson arrived fairly late [maybe around 4:30 p.m.] for a player getting to the stadium - he came through the Home Plate Gate and unlike a teammate like A-Rod [who isn't afraid of ignoring crowds even if he has to walk through them], Granderson must have stood and signed autographs for about 20 minutes.

I could see ballpark security was getting a little worried but Granderson was a champ about signing most of the things people put in his face - fast forward to now and it is too bad a classy player like him has to sit on the bench for the next three months or so. 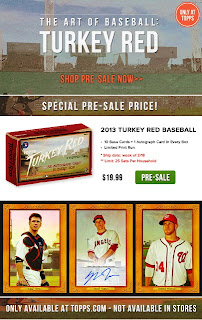 I was able to pick up two [mini] boxes of this supposed online exclusive during the $19.99 presell period on Topps.com a week ago - in reality it looks I paid for 20 random cards and a couple of chances to pull sticker autographs of Andrew Carignan, Steve Cishek, Jeff Niemann, Chris Archer, Wily Peralta, Mike Fiers, Drew Hutchinson, Scott Diamond or Joe Saunders.

I wouldn't be surprised if I pulled one of those 'top tier' guys listed - though I have my fingers crossed I avoid one at least one of them when my mini boxes are in-hand. 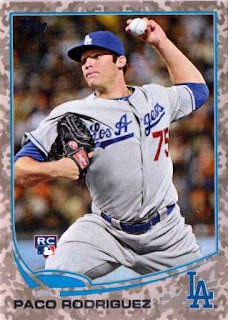 I don't know much about Rodriguez but looked for a 'nicer card' to hopefully get autographed some time this year - just be eyeballing him, he looks like another Javier Lopez or Jeremy Affeldt, two veteran lefty relievers for the Los Angeles Dodgers' main rivals, the San Francisco Giants.

Rodriguez was a second round pick by the Dodgers in 2012 and after making his professional debut - was the first player from last year's draft to reach the Major Leagues. 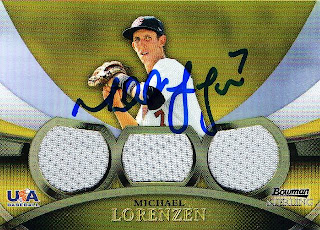 When I went to see Darin Erstad last weekend, I also was able to get Cal State Fullerton star Michael Lorenzen on the cards I've picked up over the last couple of years - I thought this 2010 Bowman Sterling Team USA triple jersey card came out nice as Lorenzen asked me where I wanted him to sign the card. 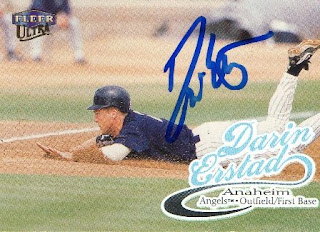 I saw Nebraska was scheduled to visit Cal State Fullerton this year, so I was already thinking I could get Angels fan favorite and Nebraska baseball head coach Darin Erstad to sign at least a couple of cards - I got him to sign three cards in 2011, but was looking to get him to sign at least a couple of more cards from the 'bunch' I have in my A-Z archives.

As much as I don't want to admit it, I just can't ever say I'm done with a getting any particular player's autograph – it just depends on what I have at the moment and whether I can cobble up more items, especially for a guy who maybe worth getting.

Since I'm kind of hard up for any baseball in-person autographs opportunities that get me out of the house - I had to go sniff things out and was planning to make the most of my afternoon, after paying $10 to watch a Nebraska-CSUF doubleheader at Goodwin Field this past Saturday.

I made my way towards the visitor's side and kind of scoped things out and saw there were maybe five or six random people looking to get Erstad - I didn't see Erstad anywhere, though I was hoping he'd sign sooner than later, instead of making collectors wait until the end. 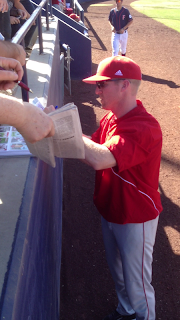 Erstad finally popped out of the visitor's dugout about 20 minutes before the game and walked by the railing - to sign for the people waiting for him. 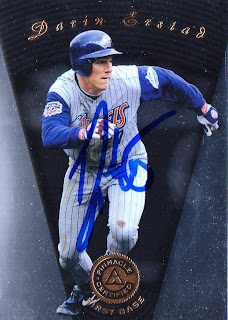 Erstad 2/4 - I pointed out the 1997 Pinnacle Certified because it's my 'shiniest' card [there was a label I had to peel off] and if it wasn't going to be signed and put away, it was just going to get scratched up even more.

To be honest, the scan looks better than the actual signed card - the autographs is kind of obscured since the background was dark to begin with.

The other card I pointed out to Erstad was a 1998 Fleer Ultra - I like the action shot of Erstad sliding headfirst into a base. 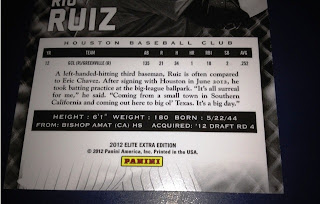 Panini maybe just be getting a little desperate to include a 68-year old in their product - though it's probably just an uncorrected error as Ruiz was actually born in 1994 and began his professional baseball career in the Houston Astros' system last year. 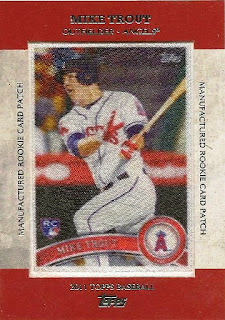 I guess I'm officially trying to complete the 25-card insert set, though I'm not really much of a set collector - I'm staying away from blaster boxes while trying to cherry pick the singles I need from eBay. 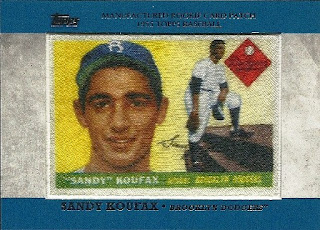 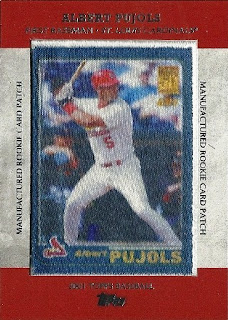 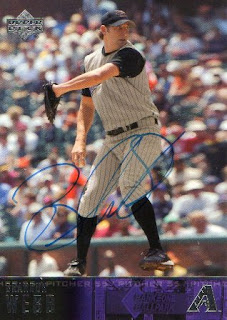 I got this autograph card through the mail when I wrote to the former ace and recently retired pitcher of the Arizona Diamondbacks back in the mid 2000's - I don't think Webb was a guy who wasn't heralded nationally as the next big thing but stuck around and quietly proved himself to be a very good pitcher.

After Webb won the 2006 National League Cy Young and built upon that with a couple more great years - I thought this guy was living the charmed life, part of a core of young DBacks in the late 2000's that included Conor Jackson, Stephen Drew, Justin Upton, Chris Young, Chris Snyder and Mark Reynolds in the mix.

Those core of Diamondbacks players never really developed as their individual careers sort of went all over the place - in the middle of his prime, Webb's once consistent career was derailed in 2009 and he was never able to throw a MLB pitch again.

I don't know if I followed Webb's career in-depth, but I find it perhaps morbidly fascinating when certain MLB players have enjoyed so much success - but are now 'has beens' or 'what could have beens' or have fans wondering, 'whatever happened to that guy?' 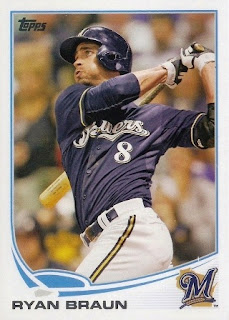 I pulled a card of Ryan Braun from a break recently and was going to include the following, though it's been about a year since his PED flap and people stumbling onto the blog might consider the comment uncouth, so I edited it out - it might be unfair but the only differences between clean PED free athletes and dirty ones is when they take their meds and whether their law firms can beat the rap if their test results are found suspect.

I was kind of shocked [or took some delight in the schadenfreude] when I heard Braun was caught up in another PED flap - but kind of pissed I took out my prescient jab just a day or so earlier.

Comparing Braun to A-Rod, at the very least the guy in his late 20's still had his MLB career ahead of him - unlike the guy in his mid 30's whose baggage has out for everyone to see and whose career is towards the bitter end.

Still, I find this whole thing sad for Braun and in the same boat - there is a part of me that is ambivalent towards apparent PED use, thinking fan sentiment is kind of stupid about guys suspect but are playing for their home team or are media, golden boy jocks.

However, past the supposed Steroids Era from the early 1990's to the early 2000's - it makes me feel some authenticity and transparency is still missing, that regardless of hardships in playing through a full 162-game season, I can't trust in MLB players in general as far as the numbers they put up and how they go about things. 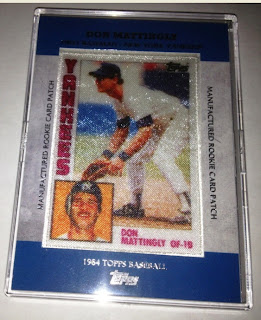 I've read complaints about not being able to pull any game-used / autograph cards out of 2013 Topps blasters - but with the potential for pack searchers to pull their chicanery, hits shouldn't be the important thing to come out of any retail break. 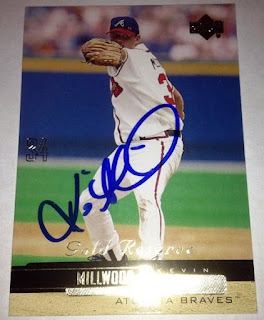 I was hoping the veteran starting pitcher would be back for his 17th season in the Major Leagues, but it looks like he has decided to retire for now - I was aware of Millwood's status as a rising star in the early 2000's and hoped to get his autograph before he blew up and became a full fledged star.

However, despite some early MLB success, Millwood was never able to emerge as a dominant starting pitcher - he was more of a No. 3 starter at his best and a No. 4 starter as he bounced around several teams during the latter part of his career.

As an autograph signer, Millwood was dependable about signing a couple of cards at a time when approached in-person - even though the novelty of him being more than a serviceable journeyman had faded over the years. 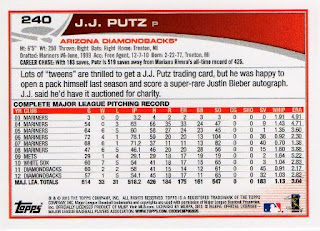 I'm still on a 2013 Topps Series I kick and bought another blaster [recap to come at some point] - I pulled an otherwise unremarkable common card of J.J. Putz and I found it interesting Topps noted Putz' notable trading card pull from last season featuring pop star Justin Bieber.

Among my collection of 15-20 collecting topics cards is a small group featuring cards with interesting backs - usually I'll put aside a card if there is an unique factoid about the player besides the usual stats on the back of card.

The backs usually mention some achievement on the field or about the player's playing career, but it can be anything - especially when a card refers to something off-beat that gives some insight into a player when the card was printed. 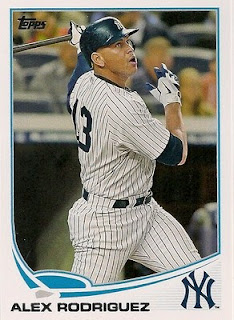 With his latest hip surgery, I thought Alex Rodriguez's career was probably over - in a sense where he's not going to have anymore full seasons as a dominant player [this has probably been the case for the last three or four years] and even if he came back some time in 2013, it's going to take a long, painful process to get things going again just to have him playing well.

Then a new set of PED allegations came out this past week and it's ugly to read about and think A-Rod's career has been a sham - as an admitted frontrunner who 'rooted' for A-Rod since he was the best MLB player at points of his playing career, I don't know if he is someone to still believe in as a ballplayer.

Other players have been suspected of being PED cheats and others have failed tests but with his career winding down - it seems like A-Rod is more like Jose Canseco than an active or former player with PED baggage you can still judge on some sort of merit like a Barry Bonds or Roger Clemens.