Showing off some card show stuff #2 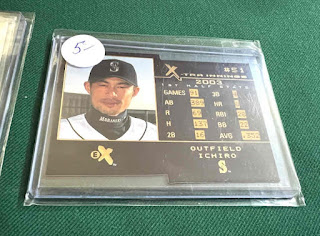 To bide my time, I was rummaging through this couple’s table where the I'd overheard the husband say at previous shows he's looking get rid of his cards- the table might have some interesting loose singles to dig for and the person usually offers a discount if at least a couple of cards are purchased.

I might have finally bit on a $5 [off-grade, off-centered vintage card of an all-time fan favorite] but was just kind of idle and looking closer - realized the card has a crease down the middle where the eye appeal wasn't there.

I had second thoughts where I really wanted the card - but had to pivot towards finding others.

2005 Upper Deck Justin Verlander RC #430 [$5] - it depends on what I may actually find, but I maybe on the hunt for loose, low end rookies of star players with significant playing careers.

2003 Fleer E-X X-Tra Innings Ichiro 1 of 10XI [$5] - this might be a type of insert I might have pulled back in the day and say, ‘meh’ where it’s not really a hit in my book, especially out a $6 pack, but the die-cut design and the use of black color scheme makes this card stand out.

Showing off some card show stuff #1 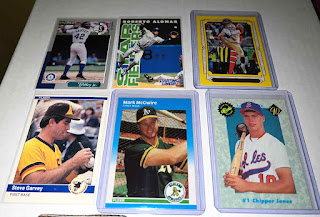 These were there results of pick ups from a couple of trips to a table with dollar boxes - last year, I picked up $20 worth of cards from the same table [different location at the show], but the last few times I was at this show towards the end of October, I didn't see the seller setup. 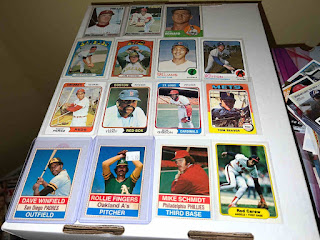 The lure was finding the occasional loose old-school [early 1980s and before] and vintage [1973 and before] cards - where the boxes ended up being sort of a treasure hunt for notable names on cards at least 40 years old.

I ended up spending $21 on the cards pictured above and while it's not high brow material - I can make believe my finds are better than picking up a $20 blaster or comparable to the results, of one of those specialty, collector repacks I've seen online. 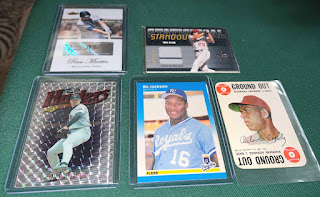 I'd moved on in my day, but still trying to see if I can rummage around cards at various tables when I was ready to leave - I ended up back at the dollar boxes, wondering if I can fish out at least 4-5 other cards I might have overlooked.

I grabbed the Russell Martin pack pulled autograph because I remember him being among a core of rising stars for the Los Angeles Dodgers through the late 2000s - at some point, while still trying to get autographs in-person, I felt he had gotten stingier about signing, so this random card ends up being a winning find in my book after Martin's career was over and done with.

I don't ever need a Troy Glaus memorabilia card again but 20 years ago, he was the Angels' young superstar slugger - where for at least a couple of years, the sky was the limit.

I'm not sure if I've ever had a 1987 Fleer Bo Jackson RC, which may have actually been his most popular rookie issue at his peak - to the naked eye, maybe it's a little off-center, but clean enough for me to overlook anything else. 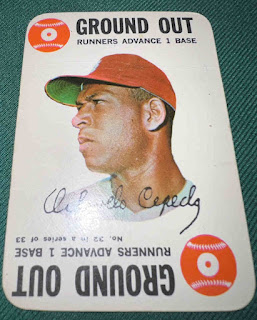 Maybe I wasn't finding anymore 'cool' old-school and vintage cards, but grabbed this Topps insert game card of Orlando Cepeda - thought it has creases running along the card, where I wasn't paying much attention. 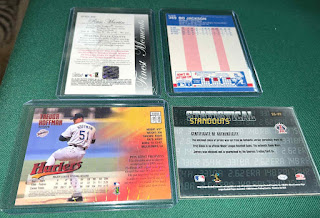 Finally I grabbed a really shiny Topps Finest parallel of Trevor Hoffman from the late 1990s - he was a notable relief star through the time he played, but maybe only years after the fact he's gets into the Hall of Fame, might I consider the occasional card I find as a keeper.
Posted by Laurens at 3:11 PM 3 comments:
Labels: Bo Jackson, card show trip, certified autograph, dollar boxes, inserts, odds and ends, old-school, random, rookie cards, vintage 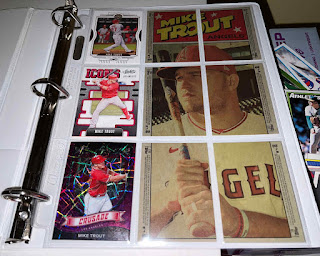 I've been on a 'run' to create binder pages for players in my decade stars collection - I only had five cards so far for a Mike Trout page and decided to rejigger the arrangement to display the 2021 Topps Heritage puzzle I was able to put together last year.

I like cards for the way they are, but once in a way to get into something a little more cutesy - where there are some fun and games involved. 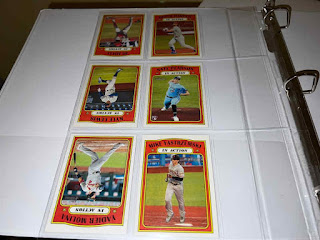 I was lightly annoyed the In Action subset cards showing the front are not oriented the same way - what I'll end up doing is seeing if I can add more loose Trout cards to fill those 'odd' spots. 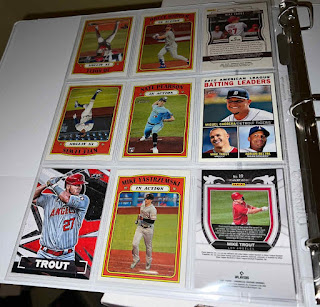 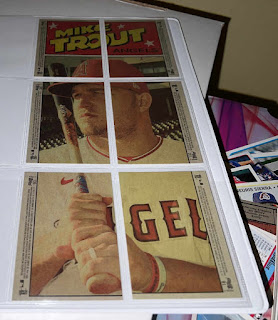 Some card show material to dwell on 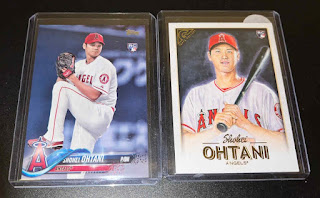 Through last year, the promoters of the monthly show I attend have tried to branch out into a hotel venue - the first couple of 'new' shows were held at a hotel about 10-15 minutes away from my house compared to the 'flagship location' each month, which takes about 35-45 minutes through traffic.
However the promoters may have had to change things up to a different hotel location [same chain though] - not as close to my house but only really a couple of cities over.
I ended going to the first hotel show of the year, which is just a little different than being in a gym - though it's still about finding that accessible table where I can dig around for some stuff rather than be idle.
I ended up at a table with a younger guy [maybe at least 25-30] who partners up with an older, guy whose booth at another card show was actually a go-to outlet for me through the late 2000s - I know it's the same person, but I don't know how he is still around and still looks virtually the same.
I was setting aside random dollar cards, because I saw a 2021 Bowman Blaze Jordan #BP71 and found at least four in the table's dollar bin - I'm not a serious prospector, but I've been really out of the loop the last couple of years.

I haven’t really harvested as many loose prospect cards of the younger guys where it's almost 'out of sight, out of mind' - until guys break through to the big leagues for the most part.

I was going through a row of cards that had some rookie year Shohei Ohtanis and I found a 2018 Topps Gallery #116 and a 2018 Topps RC #700 for $10 each - there were other Ohtanis from Panini branded products, but I wanted to dig for some licensed singles.
I might have the Topps Ohtani since it’s fairly common, but if I didn’t, it might be worth picking up [along with the Topps Gallery] - where I’m would be trying to some squirrel away cheap rookie cards for my regional PC.
I grabbed those cards and built up a miscellaneous stash of dollar cards - as long as I had a couple of Jordans in-hand, then I was good.
I spent $15 on dollar cards [and a $3 Nolan Ryan insert], which were from the younger guy’s portion of the table - while the pair of Ohtani’s cost me $15 and were actually from the older guy’s boxes.
The top row features 2019 Bowman Heritage, which I assume was an on-demand product that wasn't too popular - the second year cards of Ronald Acuña Jr. and Juan Soto off the set are kind of 'oddballs' in my book.

Even though numbered prospect parallels are a dime a dozen it seems and end up cards no one really wants - I bit on cards of Triston McKenzie and Ethan Hankins because I don't know any better.

At least McKenzie has reached the big leagues with some promise - while Hankins is a Tommy John case who looks to be on a mound pitching in some games again.

The second row features some serial #'d Topps Heritage Chrome parallels - maybe the values don't reflect it at all, but for me, it maybe a case where contemporary cards [from the last 10-15 years] turn into old school material where enough time has passed to make them novelties depending on player and card type.

I might have left a Josh Hamilton behind and would have left the Felix Hernandez - the last part of big league career stalled, but King Felix was a pitching superstar at his peak and deserves some post career love.

The last row featured a 2021 Topps Archives 1989 Big Foil Ryan #89BF-6 - it might be a case where I'd be getting one card for $3 instead of three more random dollar cards, but I had to put a newer shiny card of an Angels legend in my pile.

I've lost track of the Topps Stadium Club releases since 2014 where they don't have that same impact for me - but any loose TSC cards I think I might not have are nice finds, like this 2019 Topps Stadium Club Jackie Robinson #70 where he is inking it up over the dugout.

Finally, I don't know if it's a personal vow or anything, but any loose Satchel Paige cards should be made keepers - like a 2021 Panini Diamond Kings Gallery of Stars insert #GS3. 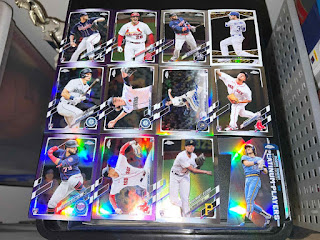 I'd rather get a 'hit' from a Topps branded product opposed to Panini, where it might be worth something if it's a decent player - however, I don't know if pulling a fringy big league reliever sticker dump auto from Topps is that much better than finding a 'Chase Antle' sticker dump auto from a Panini baseball product. 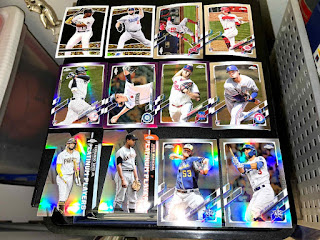 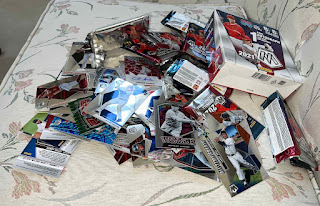 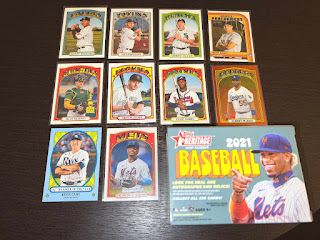 It looks like my local Walmart has been getting cards once again with a dedicated display area - when I don't plan to go to a Walmart [but end up doing so] and/or I don't expect to see anything on the shelves, I'm more likely to stumble upon cards.

For the most part, it's still hit or miss, but I tend to believe baseball is actually the least collected sport for retail flippers - so if there ends up something left over on the shelves, it probably ends up being loose baseball product.