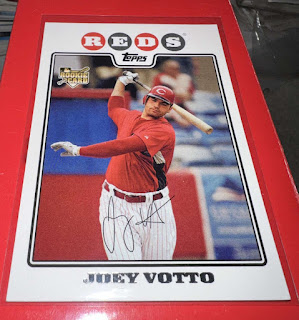 I'm still trying to gather up some of my loose decade stars binder material and as I'm going through my 2000s debut cards with some 'numbers,' I wouldn't have looked this Votto rookie over twice in my micro-mini stash - it's was a nice dollar card find earlier in the year that may end up as a centerpiece to a page. 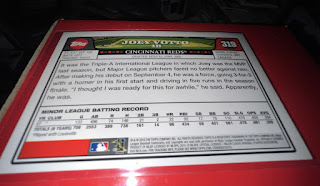 I decided to look really closer at the copyright on the back of the card and it looks like it was from 2010 rather than 2008 - I'm thinking not again with this reprint [business], so I look things up on eBay to see that this was actually from a Topps insert set in 2010 I mostly associated with retired greats.

I don't think there would be any reason not to think this was from 2008 - it just gets confusing 10-15 years later when all the cards jumble together, where at least for rookies I have to pay attention sometimes to see if I have the real deal in hand.