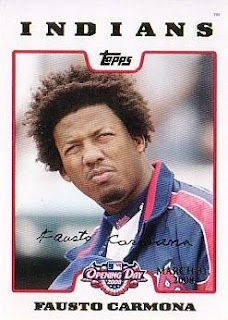 Featured Card - 2008 Topps Opening Day Fausto Carmona - this card should be in everyone's collection. After pulling it in a pack of Topps Opening Day, it has got to be one of the centerpiece cards in my collection. Just take a look at the 'morning fro' on the guy's head. Don't we feel that way at times in our lives? There is too many cards out there today, lacking the type of personality the image on this card has.

This card brings a smile to my face and transcends any collection, whether you are a prospector, a vintage collector or someone collecting for the something to blog about.

Give me 100 more cards like these and I'm be happy like a pig in mud.
Posted by Laurens at 11:42 PM No comments:
Labels: 2008 Topps Opening Day, afro, Cleveland Indians, Fausto Carmona, morning afro, pig in mud, stud 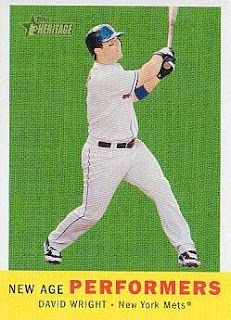 This insert card stood out among the other cards I flipped through in a three pack break of 2008 Topps Heritage. It pictures a modern player and the design is something cooked up 2008, not 1959. On the other hand, just for the second, you see the font, the bright, almost garish colors and imagine it maybe something you can conceivably pull out of a pack of 1959 Topps cards.
Posted by Laurens at 2:49 AM No comments:
Labels: 2008 Topps Heritage, David Wright, old-school, retro 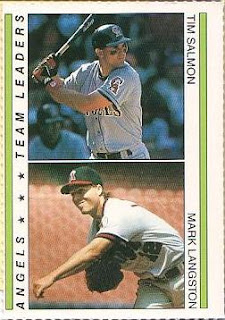 Featured Card - Tim Salmon/Mark Langston
I picked this 'oddball' card up for a nickel in a '20 for $1' commons bin. It features two California Angels' stars of the early 1990s, Tim Salmon and Mark Langston.
I remember Salmon being a favorite because I found his 1991 Bowman rookie card when it was a quarter back in 1991/1992 and I think I 'traded' for it, just because he was an Angels' player [though relatively unknown and still in the minor leagues].
Some time later, Salmon was annointed the Angels' top prospect and had an American League Rookie of the Year winning year in 1993. I most certainly believe I officially jumped on the bandwagon and became a 'frontrunner' as someone had said to me.
Salmon became the face of the franchise, providing the up and [mostly] down Angels' teams with a powerful middle of the lineup presence through the rest of the 1990s.
Salmon, who was a very good player during his 14-year career in the Major Leagues was very productive, but at times not healthy. It seemed like the last several years of his career, his bat hand slowed down as well as his range in the outfield.
While he never made the all-star team, considering everything he's done, the pinnacle of his career was winning the 2002 World Series, when he helped lead the Anaheim Angels defeat the San Francisco Giants. He hit .346 with nine hits in 26 at-bats, including two home runs and five RBIs. His on-base percentage was .452 and his slugging percentage was .615.
He fell short of hitting 300 home runs for his career and I think Angels' fans were kind of disappointed he didn't get the milestone home run to close out his playing career. He is a franchise legend, though probably falls just a notch below being a player considered to be a borderline Hall of Fame candidate.
Posted by Laurens at 1:50 AM No comments:
Labels: Angels, California Angels, franchise legends, Mark Langston, Tim Salmon 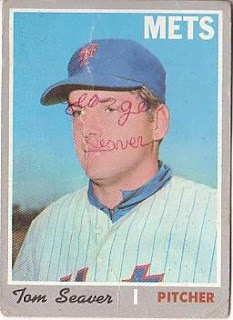 Featured beater
1970 Topps Tom Seaver #300 - when your bored, you have to resort to doing things to entertain you. I guess this is what I'm doing with this post and I guess this was the reason the card pictured is where it is today.
Out of a bundle of poor-fair 'vintage' cards selling for a buck each, I thought I'd scored with at least a card of a Hall of Famer worth the buck I paid for. It wouldn't be pretty, but I didn't think it would be this ugly.
There are creases all over the card and apparently it is autographed by one of the youth owning this card 39 years ago.
This card was going in the garbage, but it is probably going to stick around for a while. I almost want to get a professionally graded example of this card, just so I don't feel like this is a centerpiece to my collection.
Posted by Laurens at 3:51 AM No comments:
Labels: garbage, George Seaver, Mets, Tom Seaver 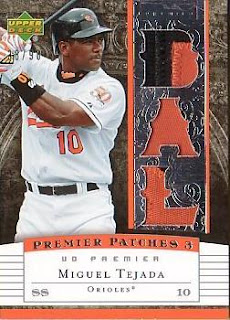 Featured pickup
2007 Upper Deck Premier Patches Miguel Tejada patch card serial #'d 38/98 - I really believe Tejada is going to have a 'bounce back' season with the Houston Astros this year. It will be interesting to follow his statistics through the season because he might be in jail for lying about his involvement with steroids.

His batting average is probably going to hover around the .285 mark. He is going to hit around 20 home runs and drive in around 95 runs. His on-base percentage will probably be around .340, with his slugging percentage around .460. Those aren't great numbers, but post-steroid era, that is a decent year. I expect him to be as durable as he once was, especially when 2007 was a fluke as far as getting injured was concerned.

After signing a big free agent contract, Tejada toiled for some forgettable Baltimore Orioles' teams through this decade. While he was obscured in a number of ways, despite performing well, he is now is strictly seen as a 'has been' with a shady steroid past.

I picked the card up for $5 at a local show running two times a week. I thought it was a sharp card and I almost didn't care who was pictured, as long as it was an 'okay baseball player.'

Ironically, I saw a similar card last month, at a card show/fanfest the Seattle Mariners/San Diego Padres have in Peoria Arizona. It wasn't a good enough pick-up then at $5, because I thought the card is irrelevant. He's been traded the Astros and people had soured on him. Of course, a $10 Vladimir Guerrero patch card [from the same set] wasn't good enough either.

I do remember him when he was hitting his prime in Oakland, where he'd be as accomodating signer as anyone in the game, though his signature wasn't that great. I got a picture with him myself and a single-signed baseball. After his Oakland days, the autograph even got worse and he strictly dictated when and where he would sign.

Looking back, Tejada sort of falls under those players who lulled fans into 'believing the hype,' where he posted monster numbers through his prime. Maybe he wasn't a pure home run slugger, hitting 40-50 home runs, but a guy who fanboys may have projected monster career numbers for, because he was doing it for several seasons, not considering he was Mr. B-12/Mr. Steroids.

Update [4/18/08] - Tejada was ambushed by ESPN's E:60, but was caught in another lie when age was brought up and the E:60 correspondent actually had a copy of his birth certificate revealing he was born in 1974. What was Tejada supposed to say, when apparently the only thing noting his actual birth year was legal documents i.e. than his green card. Either the teams he played for were ignorant or it was common knowledge, not just to the general public, where available information on players can be inaccurate [i.e. height/weight].

I don't think it affects his playing career much at all. He might have been losing a step defensively but he was still pretty consistent - part of that maybe due to steroids/PEDs, but he played in 162 games a year, had something like 650 at-bats a year until he got hurt in 2007.

He got his big contract and he was worth the money he was being paid - if he was Jose Ortiz, then he'd be shining shoes back in the Dominican right now, but if he made it because of lying and possibly taking PEDS, he also made it in spite of it.

I was looking back when the Oakland Athletics brought him up to the Major Leagues in 1997 and while he was actually 23 and not 21, it would be in-line as far as the age an 'average' prospect is called up - someone in the Athletics' organization must have known his true age or else the organization would have waited perhaps a year or two later.

What this incident really does, is just adds onto the distrust fans have for particular [types?] of players - what else is he lying about or players of his ilk lying about? Fans don't care about your hardships in trying to make it unless you are Josh Hamilton, great hope, et al. It wouldn't be a leap for them to assume Tejada was lying about the steroids/PEDS he might or might not have been using.

Next up: Vladimir Guerrero and Albert Pujols