1.) Ed Sprague - the former Major Leaguer admitted to taking andro and once hit a home run with a corked bat. I remember I would collect cards of guys whom I thought would be good players. I don't know if I paid too much attention to him during his career, but I remember trading a Larry Walker card I got signed in the mail for either Sprague's autographed card or unsigned card in 1996. I also traded for his 1992 Upper Deck card because I thought he was going to be a decent player and also didn't realize he had a 1988 Topps Traded.
2.) Jordan Schafer - was given a 50-game suspension for HGH, even though there is no current test for it in the major or minor leagues. He was a breakout prospect in 2007 and looked to be a guy who was going to be the future in centerfield for the Atlanta Braves. I think one blurb I read compared him to Grady Sizemore, though looking at his stats, my guess would have been the guy who is in centerfield for the Braves right now, Mark Kotsay. Now, I think his status is up in the air. You wonder how some players inexplicably never make it or get bounced around. It might be a little too dramatic to say, but maybe this suspension will derail his career.
Posted by Laurens at 2:31 AM No comments:
Labels: Andro, Atlanta Braves, corked bat, dumb trade, Ed Sprague, HGH, Jordan Schafer, suspension, Toronto Blue Jays 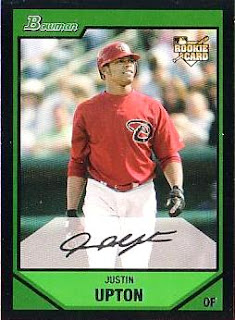 This guy is no Chris Shelton -

1.) Mr. Justin Upton is just crushing the baseball right and it is interesting how fast things have come together for this phenom - we don't really know if he can keep up his torrid start, but there is something to be said about a 20-year old Major Leaguer putting up superstar numbers.


2.) From his amateur days, everyone said he was going to be a superstar - his hot start has separated him from guys who maybe good prospects, who maybe projected to be all-stars. He is beginning to fulfill his immense promise and looks to be a superstar.


3.) Chris Shelton was a guy who hit something like 10 home runs in the first month of the season for the 2006 Detroit Tigers - everyone thought he was going to be a future superstar, but he didn't match the production and is an a 'AAAA slugger' type in the Texas Rangers' organization. Shelton had the talent to play in the Major Leagues once, but I doubt he has much in common with Upton.
Posted by Laurens at 1:59 AM No comments:
Labels: Arizona Diamondbacks, Chris Shelton, Justin Upton, stud

1.) You may love Major League Baseball - but more than ever, MLB wants you to invest in your love for the game. If not, then there is not as much options for you as a fan. This trickles down from the way you watch your games to the way you get your autographs. They want you to buy your game ticket in advance, make you commit to ticket packages and basically pay up instead of be a casual fan.

2.) Baseball can get dull - but you still love the 100 different things that may go on within the game, like a battle between a pitcher and a hitter or perhaps a finely executed double play but you feel less of a connection with the stars on the field.

3.) You may be lucky to get two or three different games a week and the MLB is only concerned about which package you'll get for your TV and the Internet - you'll typically get a pretty good in-depth regional game coverage if you live in a Major League city, but you don't get as much 'around the league' game broadcasts if you'd like to see out of town teams or stars unless you purchase a package. I suppose it builds up the regional mentality of rooting for your home town teams, but it saps the interest you have for the league as a whole, not like anyone notices.

4.) I enjoy going to the game less because there is less interaction with players - less access in some areas just enjoy something like watching players warm-up and or take batting practice or infield. Tickets are too much to go on a game-by-game basis anyway and nosebleed seats are par for the course.

5.) Stuffy, conservative color commentators and experts [Rick Sutcliffe and Jeff Brantley came to mind] - let me enjoy the game or talk about as aspect of the game I don't know about. Don't pimp a player's virtues with tired cliches that you don't use for any other player. We get a guy like David Eckstein is a hard-working player. We get people love him because he is the all-American kid who made good. Don't berate a guy for two innings or more for making a bonehead play that already has happened. Here is a secret, Manny will alway be Manny as long as he plays the game and it doesn't help me as a fan for you to point out how him watching a 400-foot flyout at home plate is somehow leading to the game's ruins. Talk about the players and the game, like Vin Scully [broadcasting for the Los Angeles Dodgers] does so well. It is refreshing to inform the viewer of the nuances during the game, good and bad i.e. that is a good play or the particular player. On the other hand, too much negative editorializing or positive praise, even as a commentator type [and not exactly the objective play-by-play guy] pisses me off.

6.) New baseball thinking vs. old baseball thinking - I value hitting power and on-base percentage and the best lineups utilize players with those qualities. On the other hand, I don't think Juan Pierre is the worst player in the game, when you do. I would venture to say, if a stathead's wet dream are only guys with the ability to hit for power and on-base percentage and do little else, then they are missing the point entirely.

7.) Biases and politics within the game play on - guys will be called out when things don't work out and some guys will not get their just credit whether as a player and or manager. Blogs, forums and the mainstream media does a great job of emphasizing the players and managers they don't have much confidence in.

8.) Storylines are only so good - when the media doesn't jump on the bandwagon.

9.) You know, if you like collecting autographs - the better players in the Major Leagues have a 100 different things to do besides sign for you either in-person or through the mail.

10.) Nothing can replace performance on the field - where it matters.
Posted by Laurens at 5:21 PM No comments: 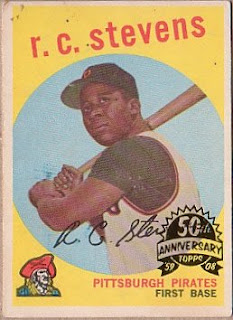 Topps made it somewhat easy to acquire these original 1959 Topps buy back cards. Inserted as box toppers, at a rate of about one per two boxes, they are embossed with the Topps 50th Anniversary logo, which distinguishes them from similar cards not bought back for the program. 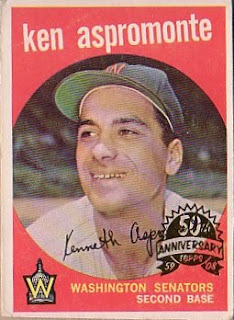 I suppose they are altered because they are embossed, but then you wouldn't be able to keep track whether or not a card was a buyback or not. Having an actual piece of trading card history [and not merely a reprint] is pretty cool.

I picked these two cards in the mail, purchased individually from the same seller on EBay, for the price of about two packs of cards [$1.79 each BIN with $2.59 combined s/h].