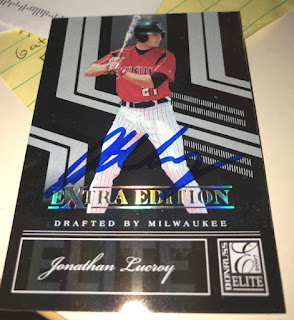 The Angels just signed Lucroy to be the catcher who presumably gets most of the playing time next season - he had some nice years in his prime, though his production with the bat has bottomed out the past few years.

The signing is only for one year and if Lucroy can bounce back just a bit, he probably helps the Angels - though many catchers tend to run into a wall, once they are on the wrong side of 30.

I guess he was a decent signer between his time in the Arizona Fall League and maybe in spring training his first couple of years in the big leagues - I found some signed cards of his, so I can add him to my all-time autograph collection once he plays in a regular season game for the Angels.

FWIW, I remember Lucroy was going from field to field during a spring training Texas Rangers workout I went to in 2017 - presumably he was done for the day, but still wouldn't stop for just about anyone.

When more borderline HOF guys get their call 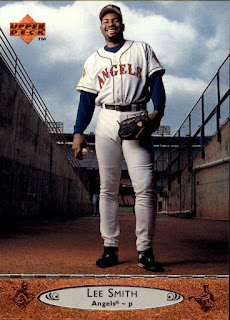 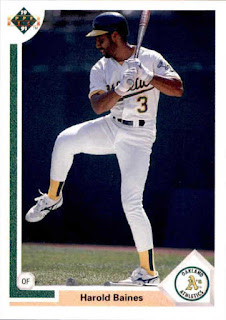 As a baseball fan, I'd probably be more of a big hall kind of guy - but I thought it was a joke when I found out through scrolling through a social media post that apparently Smith and Baines were elected to the Hall of Fame through the 2019 Today's Game Era Ballot.

Baines' election to the Hall of Fame will probably cause just about every numbers oriented analysts' heads to explode - I won't begrudge or bemoan his induction to the Hall since there are too many writers messing around with someone's actual accomplishments in the guise of being objective.

Personally, I consider Baines in the middle of the pack as far as a Hall of Very Good guy, but in a roundabout way - Baines probably got some extra consideration for the 134 hits he didn't get towards that 3,000th hit club he missed out on.

The last card I touched featuring Baines was his 1991 Upper Deck [#562] - it went in my awesome action collection as a game face card; I like the image of him on the on-deck circle, about to swing while doing his high leg kick.

As far as Smith, though he once held the all-time saves record, I've always thought of him as mostly a junk wax era journeyman reliever - however, with Trevor Hoffman getting into the Hall of Fame recently and with Mariano Rivera on the way, someone had to fit Smith in-between the two in order to have a little run of modern era closers.

Maybe an obvious non-Rivera candidate in the next several years will likely be Billy Wagner - depending on who is on the ballot.

My favorite Smith card was his 1996 Upper Deck card [#266] because while it obviously shows him with the Angels - it was also a seemingly more elaborate image setup compared to a typical baseball card picture. 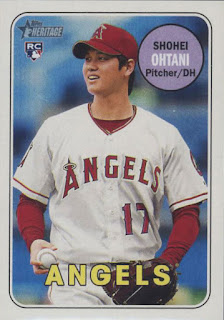 Go figure that it would be another Ohtani as my favorite card of the year but the relatively healthy half of him lived up to the hype and I wanted to showcase my best rookie year card of his - the traditionalists who have collected Topps Heritage for years may not like these short print gimmicks because it gets in the way of completing their sets.

However, the Action Image variation cards picturing prominent rookie or second year stars have gotten popular to collect - even if it wasn't autographed, in my mind an Ohtani was a definitive card to have.

A farewell to Garrett Richards 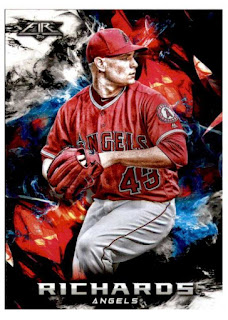 As he has moved on and signed a two-year deal with the San Diego Padres, I don't know if I had any particular attachment to Richards as a pitcher on my local big league team - he'd pitched about 138 combined innings his last three seasons with the Angels, so arm injuries really robbed him of some prime years.

Richards was Mike Trout's best friend on the Angels and it might have been nice if he could have stayed healthier - now he looks to rehab and make a comeback from Tommy John Surgery sooner than never, even if it takes a couple of years to be back on the mound. 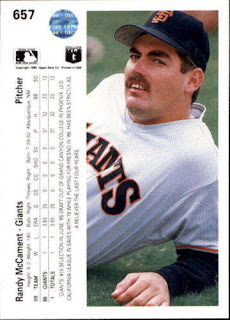 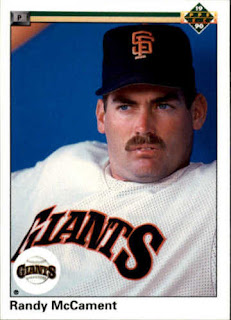 Through another blogger's post, I stumbled upon a "Ugly Sweater" Ugly Baseball Card Contest at Baseball Every Night - without thinking about it too much, I was sure I could find at least one card in particular that stood out and this was the one I chose.

When I started getting interested in collecting as a kid just about 30 years ago, the last players I'd ever think about being interested in are rank and file guys like McCament - but not every card in an 800 count set could picture superstars like Roger Clemens, Ken Griffey Jr., Will Clark, Don Mattingly, Bo Jackson or Jose Canseco.

It maybe no small feat that McCament actually pitched in parts of two big league seasons - but with the images used on this junk wax era 'gem,' it would be hard to convince anyone that McCament was any sort of professional athlete.