My wallet card - Joe checking out the Charlie Foxtrot 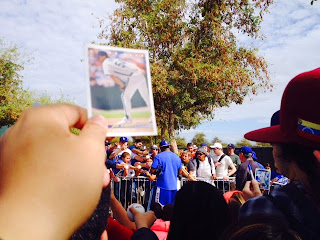 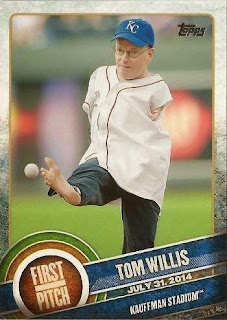 When it comes to loose packs, I'm more inclined to pick them up at my card shop, since there is peace of mind that the packs haven't been searched - even if the box isn't entirely 'new' and there have been multiple packs pulled already, I'll take my chances as opposed to a gravity feed at Target and/or Walmart.

Results vary, but I cling to the the idea hobby packs gives me a better chance to pull a card of note - regardless of actual value since flagship Topps costs $2 a pack. 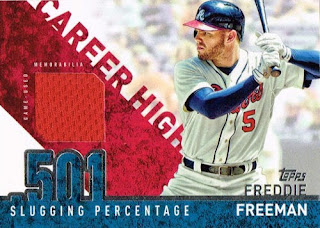 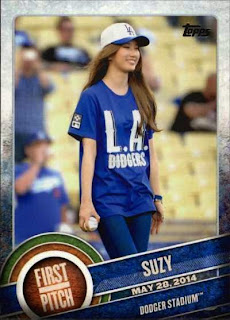 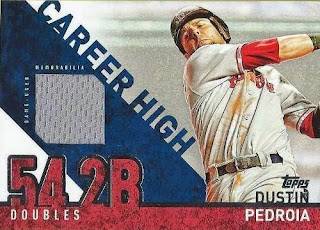 In the last couple of years, a collecting ritual is to pick up at least one, loose hobby jumbo pack from Topps / Bowman products - it doesn't mean I won't end up buying any more hobby jumbo packs or even splurging for a jumbo box, but I've got to get that initial, hobby jumbo pack break out of the way. 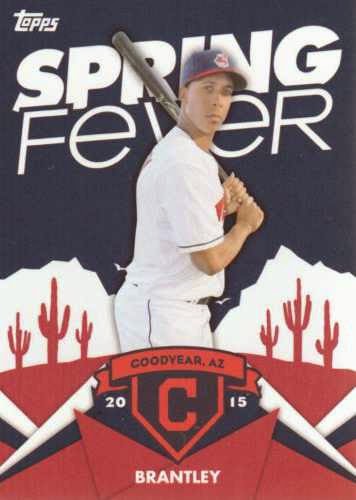 My wallet card - Joe checking out the mountains 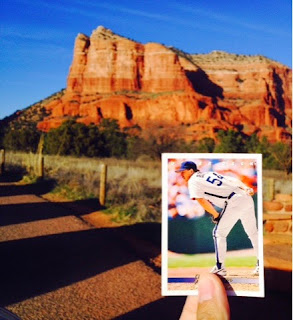 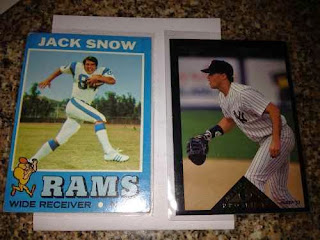 I wanted a card of former NFL player Jack Snow [passed away in 2006] to 'tie up' the bloodlines connection with his son J.T., whose career in pro baseball, I am more familiar with - since J.T. was a former Angel [though mostly a former Giant] who saved Dusty Baker's son from a collision at the plate in the 2002 World Series, was Gold Glove fielder at first base, yadda, yadda, yadda.
Posted by Laurens at 4:15 PM No comments:
Labels: 1971 Topps football, bloodlines, card shop trip, J.T. Snow, Jack Snow, MLB, NFL, quarter box, random

I moved the magazines around in my local Target's magazine section 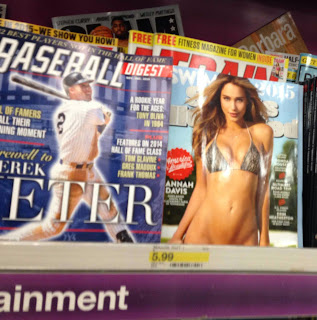 The Sports Illustrated swimsuit issue used to be a big deal to me growing up through the early 1990's - but maybe I grew up, the Internet happened and I feel like the swimsuit issue was actually quite conservative despite SI trying to hype things up each year the issue comes out.

Because there are seemingly no actual collecting / hobby related publications anymore, I spend only a moment of my time at any magazine section these days - though not a hobby publication, the Baseball Digest of recent times looks pretty good compared to the ones I read 15-20 years ago. 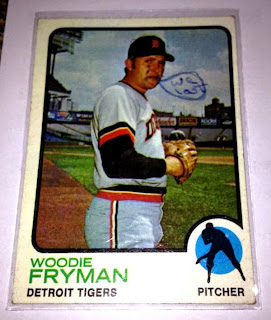 I was thumbing through some old-school/vintage cards and this 1973 Topps card caught my eye - I'm sure other card bloggers have riffed about the writing made on cards, maybe to scratch out a team name or to add some extraneous scribble [that may only have been understood by the kids who once had the cards].

I can imagine some bored knucklehead having this card in hand and drawing tears running down Fryman's face with a bubble saying, we lost - it's quaint and crude, but at the same time, it gives the otherwise forgotten card some character.

It might be cute to hunt down these 'defaced' beaters and trying to decipher the meaning behind those scribbles - whether it's something written on cards or something added to the image. 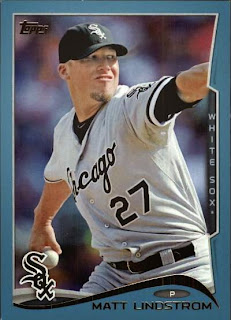 I just put away a couple of his loose cards last night and while he may have signed a card or two for me before - he is one of those journeymen still playing, I have at least five or six cards of that I don't know what to do with.

Now, it looks like he'll get a spring training try out after signing a minor league deal with the Angels - chances are he will not make the big league roster and might be stuck in AAA until another opportunity opens up, but who knows. 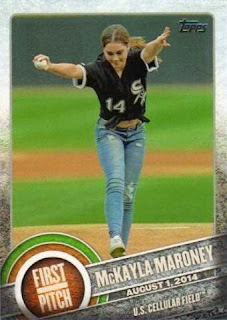 These 2015 Topps First Pitch inserts are not hard to pull at all, though I picked up the Maroney outright for $0.50 - I might end up trying to complete the set for fun, since there are only 15 cards and I already have five or six.
Posted by Laurens at 1:53 PM No comments:
Labels: 2015 Topps, First Pitch insert, gymnast, McKayla Maroney

My wallet card - Joe at In and out 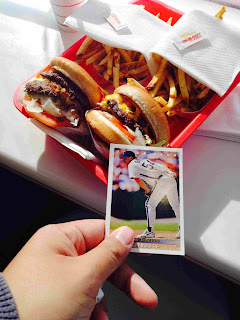 In and Out Burger has been pretty ubiquitous throughout my adult life and I hold no special affinity for it - however, what I've taken for granted perhaps is how In and Out's burgers pop.

When you get your order, your burger come piping hot, almost glowing and it's kind of evidence it was put together with some care - as opposed to something just slapped together, nuked and left sitting around 'pre made' already, like other fast food burger places.

In and Out may not be fancy, but their burgers hit the spot - meant to be worshipped for a minute or so, then consumed. 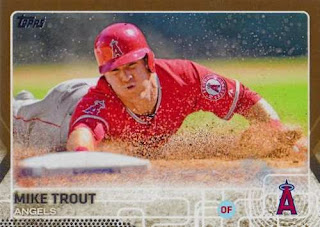 I still have to pick up my share of loose hobby packs and an obligatory hobby jumbo pack - but I think I got my initial retail samplings of this year's Topps flagship brand out of the way. 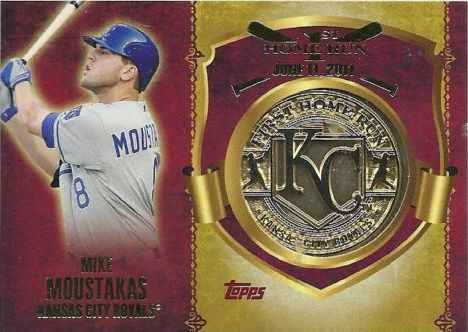 Commemorative patch pack
#FHRM-MM Mike Moustakas - first home run medallion card; even if they aren't going to worth much, these cards are pretty nice to have in-hand; I do wonder if the medallions are going to rust over time and it's just too bad I got a guy who killed the Angels in the Division Series last October. 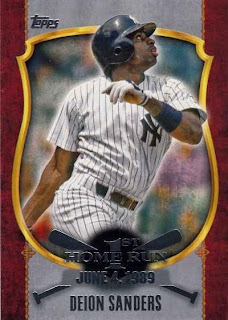 #FHR-40 Deion Sanders - all things considered [i.e. with all the non-baseball subjects Topps' Allen and Ginter sets and even subjects in this year's First Pitch inserts], Sanders is my pick for the least likeliest guy whose card I'd expect to pull from a 2015 pack of baseball cards.

I realize he was a 'two-sport' player whose accomplishments in the NFL have him enshrined in the Pro Football Hall of Fame - but this isn't the early 1990's [the height of Prime Time] and no one cares about his pro baseball career in 2015.

My wallet card - Joe checking out the view 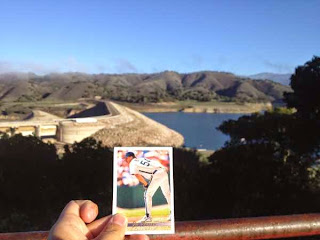 During a five-day road trip to Northern California with my parents - made a pit stop at the Bradbury Dam Observation Point in Santa Barbara.
Posted by Laurens at 10:40 AM No comments:
Labels: 1993 Upper Deck, 2015, Bradbury Dam, Joe Boever, random, wallet card 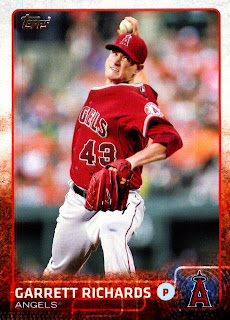 With the multicolored borders, I think this year's flagship Topps cards are a little more playful, so they may appeal to kids more - as opposed to a set of cards that is dissected by older, more serious card connoisseurs.

I've had no problems with Topps card designs from the last five years - though I think the designs have been a little too conservative and bland. 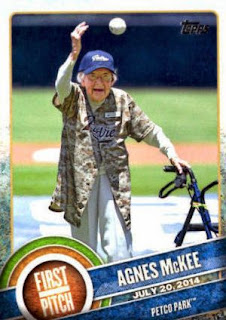 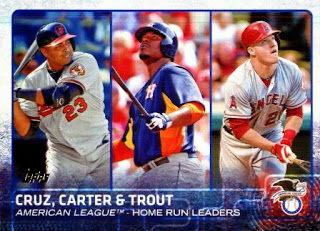 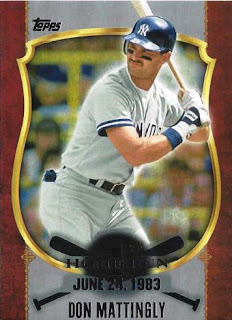 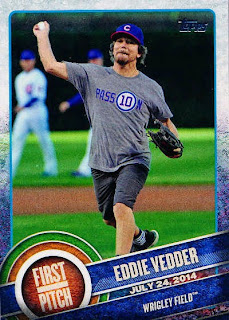 I had to get to a Target somewhere to get my initial 2015 Topps fix - I picked up a Value Pack, a 72-card hanger box and a blaster box.

I like how the cards look, though the cards maybe condition sensitive - with the colored borders and thin stock. 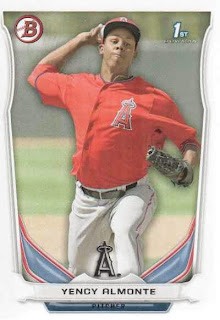 As far as getting stuff signed by random baseball players in-person, I'm always going to be one of those 'card guys,' but it's gotten to where not many get signed for the time I put into hoarding them - I dread taking the time to keep up with transactions, dig around for cards and make sure certain cards are with the right organizations for a particular period of time.

I've never had cards for every single player within a particular team, but I still end up confusing myself by the number of cards I do end up with - I get depressed when I have a horde of unsigned cards that never get ink on them and I wonder if I can just ditch the cards for the most part.

As is, collecting cardboard to be scribbled on is a 'thing' for me and sorting out unsigned cards is just one of those rituals that have to be done - so I don't lose momentum as far as being out somewhere, being prepared and actually going through the process of getting the cards autographed.

Like my post yesterday with the Dodgers, I've gone through the my 'minors' cards for the Angels this time to see if I could weed out cards of players not with the team anymore - maybe it's because the Angels' system has been more than a little thin, but there doesn't seem to be too many prospects within my brick of cards.

Eric Aguilera - I assume still with the organization
Yency Almonte - I assumed he was still with the organization just the other day, though he was just traded for the since departed Gordon Beckham.
Mike Hampton - didn't see the former MLB pitcher listed among the 2015 minor coaching staffs for the Angels, might have decided to do something else.
Pete Harnisch - I get excited when the Angels hire a former MLB player, but I never get to see guys like Harnisch or Hampton, because they usually are enlisted to work with minor leaguers.

The Angels 2015 minor league coaching staff list was posted online - it looks like Harnisch is still with the team as a special assignment pitching coach.

Roberto Lopez - free agent; he was with organization for years and I remember his buddy chiming in and saying Lopez was 'Jose Canseco,' when I tried to get him to sign a card in Rancho Cucamonga. 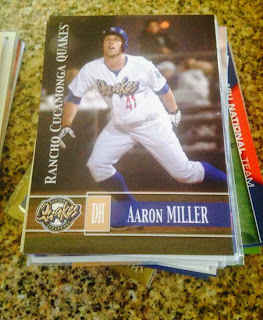 I don't know if I can say I was busy with it all of January, but most of what I did with my cards is sort the ones I try to get signed in-person - the cards are arranged by teams, between the MLB guys and the minor leaguers.

I try to keep the boxes I have for my cards updated, so that means trying to weed out cards of guys who are not playing for a particular MLB organization anymore - it's easier to account for moves involving big league players, though I'm always checking on MLB Trade Rumors, MILB.com or Baseball America for the obscure minor league guys whose unsigned cards still populate my 'minors' section of each MLB team.

There are always transactions I haven't accounted for though it looks like I maybe down to the Angels and Los Angeles Dodgers as far as players to check on - I went through my brick of cards featuring draft pick, prospect and minor league cards and on a piece of paper, list players' names who I figure may not be with an organization anymore [guys who are 25 or older, guys who were drafted in one of the last rounds and/or guys who weren't even drafted].

I then look them up online, jotting down where they may be, even if that means they are not playing anymore - afterwards I actually will pull the cards and file them away, whether to go towards my A-Z archive [of commons] or towards a collecting topic, mini-collection.

A small sample listed are cards I'm going through for the Dodgers' system - when going through my 'minors' cards, I just have to chuckle when I find cards of guys who are long gone, whose last stat lines came more than a few years ago.