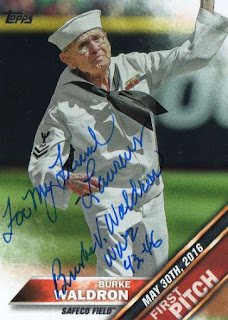 The 93-year old WWII veteran who threw out the first pitch before a Seattle Mariners game in 2016 signed my two cards in blue ink [one personalized] in about a couple of weeks - Waldron also sent a two-page note and sent a small info card for the Latter-day Saints, with the inscription 'And I'm a 'Mormon' written.

Maybe it's the least that can be done for someone who served his country and who has lived as long as he has - but it's nice for Waldron to get his 15-minutes of fame and be immortalized on a baseball card insert of his own.

I made it a point to send to an autograph request to Waldron with two First Pitch insert I found - after it became a thing where TTM collectors reported successes from him. 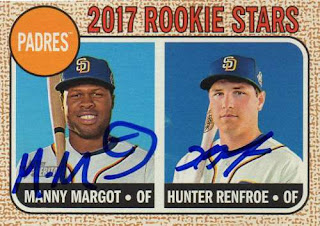 I wanted to see how a dual player 2017 Topps Heritage Rookie Stars subset card would look autographed - it's not really a thing where I always seek multiplayer cards out to be inked up because I worry about completion, but I got Margot first [sacrificing my chance to get a set card signed, since he signs one per person], then managed to finish the card up by getting Renfroe.
Posted by Laurens at 4:11 PM No comments:
Labels: 2017 spring training, 2017 Topps Heritage, Featured autographs, Hunter Renfroe, in-person autographs, Manny Margot, San Diego Padres 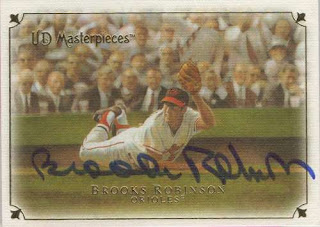 With a donation, I was able to get the Hall of Famer's autograph on a couple of his cards - I saw that he started signing TTM again and wanted to see if I could get a response.

I remember 15-20 years ago when Robinson would sign through the mail for a small fee - I also remember when he basically stopped answering TTM requests because he had some sort of agreement with a card shop for paid signings.

Robinson's autograph may not pop as much with the matte card surface and the darker, painted image used on the 2007 Upper Deck Masterpieces card - but the auto is nearly centered perfectly to go with the horizontal picture. 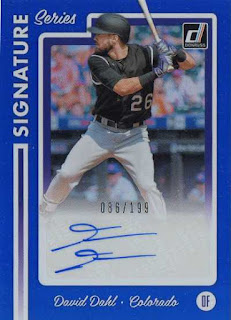 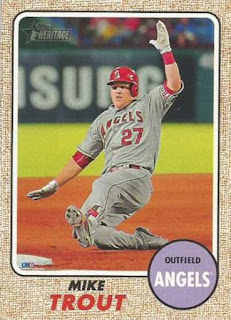 I picked up this Action variation parallel for my Trout PC - because he's gotten to be so prominent with his premium cards going for big money, I’m merely collecting Trout’s cards ‘as is’ as opposed to really caring about whether I pick up any specific card.

I'll keep any miscellaneous cards I'll pull or find and when the mood strikes - look for at least one nice looking, current year non-auto insert / parallel that isn’t going to cost an arm and a leg. 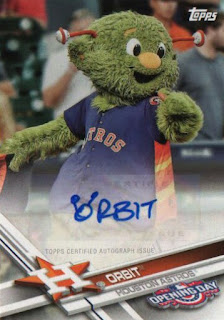 It looks like a fresh box was open on the counter and while I really turn my nose at this more cutesy, 'flagship-lite' alternative - I wanted to bust some packs and for a dollar each, was there anything to lose?
Pack one
#189 Todd Frazier
#98 Lorenzo Cain
#8 Victor Martinez
#M-25 Brewers Mascot - Mascots Checklist
#70 Jay Bruce
#39 Aledmys Diaz
#95 Kyle Seager 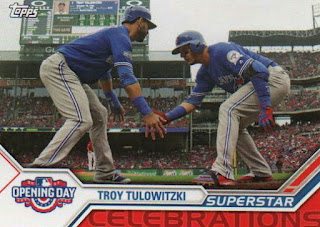 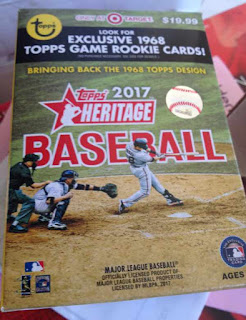 I purchased a blaster box the day I picked up my random card shop packs a few weeks ago - I remember listing out what I pulled from my hobby pack breaks first, then feeling like maybe I should go on with the blaster box.

It looks like there were actually nine packs [instead of eight totals packs] in my blaster for a total of 81 cards - I didn't pull a Target exclusive 1968 game rookie insert, so I think I might have been somehow skunked with this retail box, but ended up pulling six short prints [usually pulled 1:3 odds]. 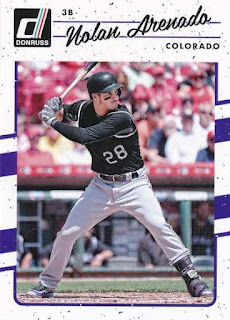 With a look inspired by an updated take on 1990 Donruss, the base cards are sharp, though still otherwise feel generic - maybe my small sample size of two packs doesn't quite tell the entire story, but it's hard to buy into these cards when they don't really stand out. 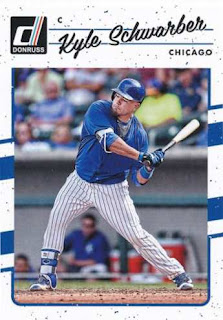 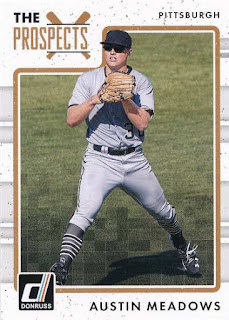 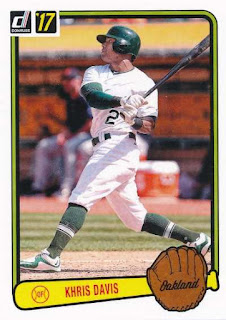 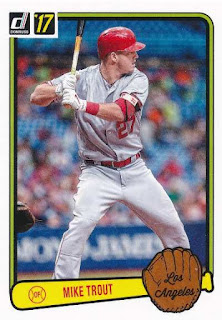 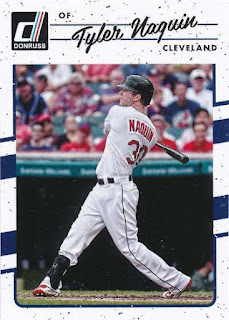 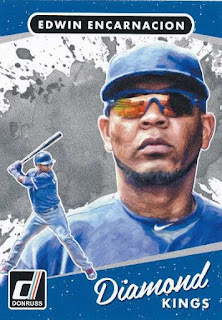 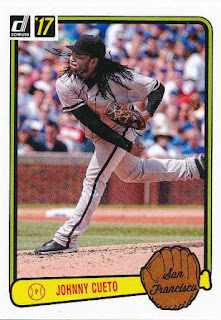 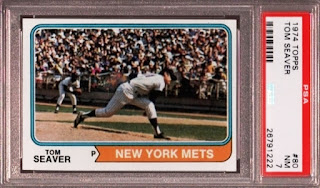 I picked this card up for a sampler run of PSA graded Topps cards from 1952-1980 - I've always associated old-school [anything between 1974-1985] or vintage [1973 and older] cards as something 'old and valuable,' especially when the cards came out before I was alive.

I kind of want to see if this particular project becomes a more significant, satisfying chase - while eBay effectively saturated the market, it makes it easier to look for cards whose values were inflated 25-30 years ago, even if they weren't quite the big money old-school/vintage cards serious collectors continue to chase today.

So far I only have 3 of 28 cards [a 1960 Willie Mays and a 1961 Eddie Mathews are the other two I bought years ago] for this project - there maybe a couple of other cards I can use, though they maybe tied to another part of my collection, so I might only decide to use them if they are the final two cards I need. 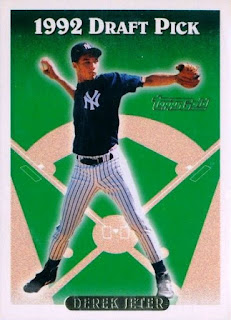 In addition to the Bowman rookie card I picked up a few weeks ago, I also grabbed this rookie-year parallel card - maybe I find myself a priced out of the modern card collecting game [with the focus on guys like Mike Trout and Kris Bryant], so maybe I'm 'going back' to looking for cards I've overlooked over the past 25 years.

The 1993 Topps Jeter rookie card is kind of boring with an image of a young Jeter superimposed into a generic outline of a baseball field - the card is sort of a post junk wax era 'junk wax card,' but the foil stamping makes the card looks just a little bit more attractive. 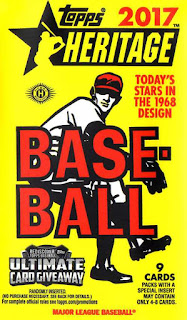 I'm not exactly a fan of Topps Heritage because it has been played out card product to me - I feel like there should be more effort to come up with something original when it comes to baseball cards as opposed to dipping into your 'heritage' as sort of a crutch to stand on.

I do appreciate some 'old school' elements in baseball cards, so it's not like I don't get what these cards are about - I grabbed 7 random packs from a card shop and also a blaster box from a Target to see if I can get into these new cards for a little bit.

It may not feel authentic, but the thinner card stock is cleaner and the cards look fairly sharp - it seems like there was no effort to make the cards look like the originals, which may not be something people who collect Heritage seriously may like.

I read a little primer on the original 1968 Topps cards - but despite the inconsistent pattern scheme on the borders, I'm okay with the cards looking a little bland and maybe lacking a little imagination [just considering the cards themselves and not the wrinkles and gimmicks that come with a 2017 release].

The card backs are bright and bold - so that makes them easy to read.

I realize 1968 Topps wasn't a set that used facsimile autographs of the players as part of the design - so the fronts of these 2017 Topps Heritage cards look less cluttered. 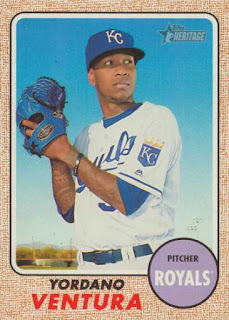 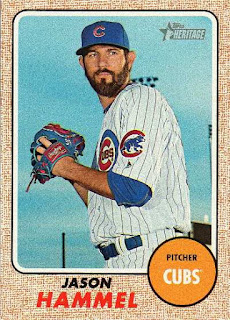 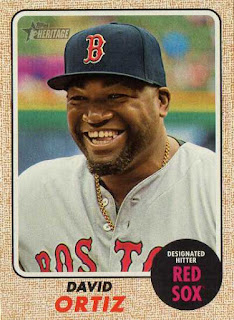 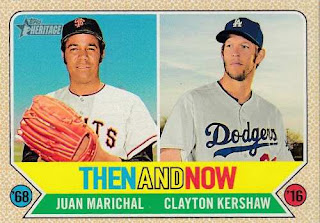 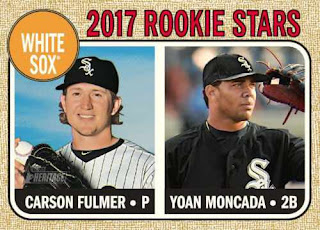 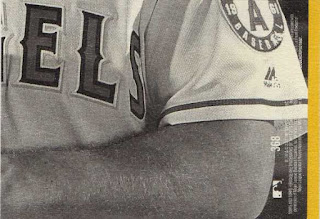 #368 Manny Machado - All-Topps subset; it's totally not obvious who is partially pictured on the back of Machado's card.
Topps info card/Bunt pack code card 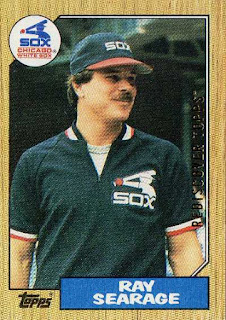 It's going to be another 19 years for 2036 Topps Heritage to come out featuring 'Today's Stars in The 1987 Design' - where pulling a buyback card from 1987 Topps would make sense, though I probably could have pulled any junk wax era card from this latest Topps promotion. 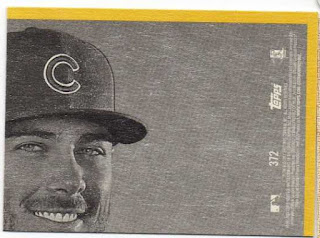 #372 Anthony Rizzo - All-Topps subset; it's totally not obvious who the smiling mug on the back of Rizzo's card belongs to. 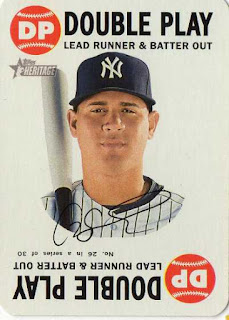