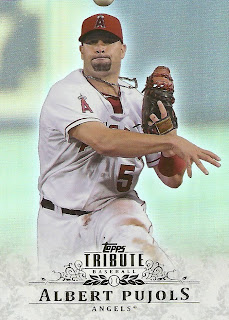 Pujols was going to be the savior of the organization, making the Angels a national brand in Major League Baseball through the next 10 years - putting up metronomic numbers for 162 games a year as the Angels muscled their way to dominate the American League West.

Now, Oakland has put out a better baseball product, Texas still has a decent baseball team and the Mariners will probably end up being better than the Angels at the end of the year - what a disappointment to see how things have fallen apart for the Angels, not knowing the downfall started with the signing of what was one of the dominant talents in the game over the last 10-15 years.

If Pujols had only pop a few more home runs, get a few more hits to raise tha BA or do enough things to get his OBP and slugging up, maybe I'd be more confident in him in 2013 - but he's put up sluggish numbers seemingly all season long, presumably because he had to nurse his bum foot on a game-to-game basis.

Now, with Pujols shelved for what most likely be the rest of the year, I have no rooting interest for the crap team the Angels have put together for 2013 - except for Mike Trout perhaps, who the F cares what the rest of the team does now that Pujols is a goner.

While I don't question Pujols' ability, smarts, desire or 'want it,' not even at these dire times - how is his broken down body going to allow him to become a relevant player again, even if come the start of next year, pronouncing himself healthy and ready to go.

I was naive in thinking Pujols would be the same player when he'd already been decline before he signed with the Angels - what a raw deal for the fans, since I don't think it's going to get better for him. 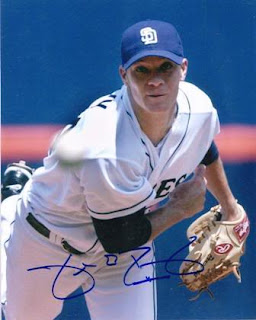 He hasn't been as great as he once was in his prime years with the San Diego Padres in the late 2000's - but looks to be a hired gun for one of the MLB playoff contenders as the July 31 trade deadline looms.
Posted by Laurens at 1:06 AM No comments:
Labels: featured autograph, in-person autograph, Jake Peavy, San Diego Padres, spring training 2007 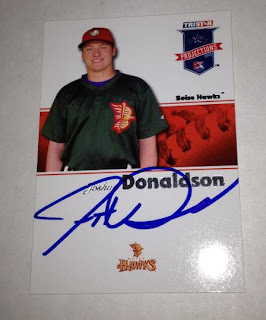 Someone asked me who Donaldson was when he was dropped off at Angel stadium as a visiting player a couple of years back and I referred to him the 'scrubbliest of scrubs -' it took some time, but the Oakland third baseman has stuck in the Big Leagues in 2013 and emerged into a fun player to watch on a day-to-day basis.

I wish the Angels had stumbled upon someone like him instead of a guy who plays like a stiff at times in Alberto Callaspo - Donaldson plays some good defense, gives you some pop and has 'clutched up' at times, getting big hits for the front-running Athletics at the most opportune moments over the past couple of seasons.

I think I got Donaldson to sign my card during a past spring training trip either in 2009 or 2010 - his autograph has gotten sloppier over the last several years I've gotten him to sign, though he's been always accommodating about doing it. 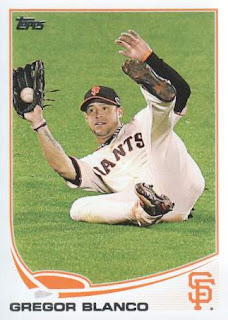 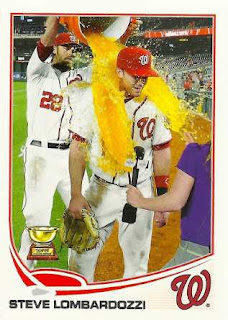 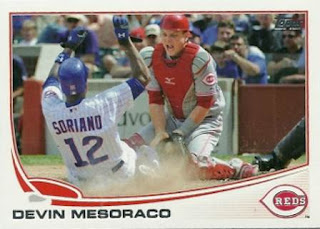 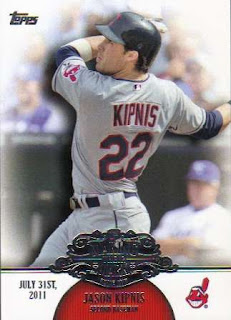 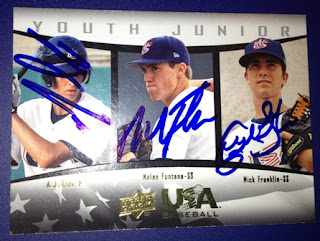 I finally completed a 2008 Upper Deck Team USA Youth Junior multiplayer card [previously signed by Franklin and Cole] by getting Fontana [playing for the Lancaster Jethawks in 2013] to ink it up - before a California League game at Inland Empire Thursday night.

Fontana currently has an on-base percentage of over .400 playing in the Cal League - though if he reaches the Major Leagues, he may end up as a utilityman somewhere.

Cole, a pitcher who was traded back to the Washington Nationals from Oakland, made an appearance at the 2013 Futures Game and closed things out for team USA - I got him to sign the card after a Cal League game in Lake Elsinore in 2012, when he was on Stockton [Oakland A's farm team].

Franklin has been 'star rookie' so far with the Seattle Mariners, though so was Dustin Ackley a few years ago - I got Franklin while he was playing in the Arizona Fall League in 2011. 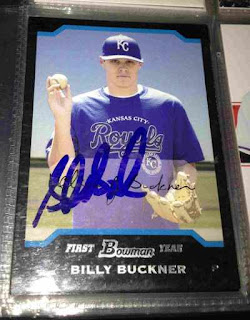 There are journeyman baseball players who manage to stick around the minors for a while, maybe even getting a opportunity to be up in the Major Leagues for a short time - I guess players of Buckner's ilk are still striving not only to reach the Major Leagues [for the first time or not], but actually stick on a permanent basis.

I've probably had Buckner's 2004 Bowman Draft card since it first came out and after holding onto onto it all these years, was able to get it signed this season - Buckner has been given a little opportunity to pitch in the Major Leagues after the Angels signed him as AAA depth.

It doesn't mean he is going to stick around but hopefully he can do something on the mound for the Halos - maybe like a Jerome Williams [despite his recent struggles as a starting pitcher] who has earned some MLB time with the team in parts of the last three seasons.

Since the card featured was for my 2004 BDP set, I had a longtime acquaintance help me get another card signed by Buckner for my all-time Angels collection - even though it's been about 10 years, I'm still trying to complete the 2004 BDP set autographed and probably have a good number cards signed featuring the guys who at least reached the Major Leagues.

I still need a bunch of cards signed featuring players from the set - who ended up like the guys I wrote about in this previous post. 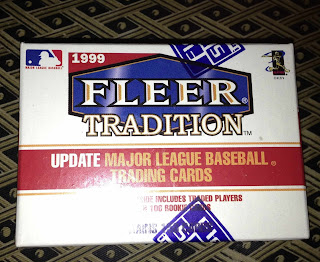 I picked this box set up for perhaps $20-$30 when it first came out because of the potential of the 'hot rookies' - such as Tim Hudson, Josh Beckett, Pat Burrell, Rick Ankiel, Eric Munson [!] and Alfonso Soriano among others.

I remember it like it was just yesterday and probably can find the ad where this set was advertised by Fleer in a Beckett - after 15 years I finally decide to unbox the cards since the set is probably worth about $10 to the right person, which means to say it's kind of worthless otherwise.

The actual cards are pretty nice though, even to this day and it doesn't look like there is any damage as far as the cards sticking together - I might be able to find some random cards I can conceivably get autographed by players in this set, who maybe a coach or a manager somewhere.

Just speaking as an in-person autograph collector who chases after random coaches / managers / team personnel / scouts who maybe ex-MLB players with cards - it might not be an idea to occasionally [unless you've been a baseball card hoarder all these years anyway] look for and bust a box [or open a set] of cards from at least 10 or 15 years ago to possibly find cards to be autographed besides just having current year cards for active MLB players. 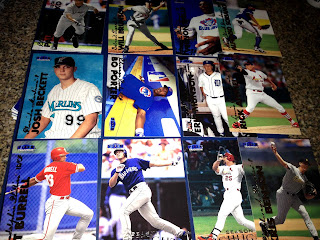 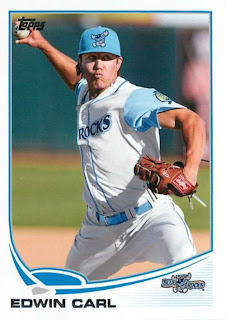 As an in-person autograph collector, I put together cards for the 30 MLB teams on a year-to-year basis with a 'block' of cards for anyone with the big league team and another 'block' of cards [USA, draft pick, first year prospect, minor league] - for players/coaches in the minors, along with any extra cards for the Major Leaguers.

As I'm slaving away when it's about 90 degrees in a room where most of my baseball cards are, trying to do some sorting, to keep things in order - besides top prospects and players I assume will get an MLB shot, I always find myself looking at some minor leaguer's card, wondering if he could still possibly with the big league team I've sorted his card in.

There are always minor league players I have to Google to see if they've likely been released by a particular MLB team - when I look at a player's profile on MILB.com and find his status as 'released,' there is some closure and I can remove those players' cards from whichever team set I'd organized them into the first place.

Sometimes I might have to go digging around through blog / twitter posts or peruse a posted transactions list on Baseball America] when a cut player's profile was never updated on MILB.com - it's kind of funny when I have cards of players who have been cut a year or so ago.

A baseball card collector gripe I've occasionally heard since Bowman brand was re-introduced 25 years [!] ago - was a collector would likely be stuck with cards of players who ends up not making the Major Leagues instead of cards featuring proven players at the MLB level.

Maybe it's because Topps is too eager to add unproven players to the checklist of various products like Bowman / Topps Pro Debut / Topps Minor League Heritage in search of the next big league star - even if it's really just to fill out the base set.

As an autograph collector, I don't mind pulling cards of players still in the minor leagues - since I'm hoping I can get to see the particular players and get cards I've hoarded signed at some point.

However, for players who end up basically being non prospects, there is a 'here and now' aspect with any draft pick / first-year prospect / USA cards - just because a guy in the minors or a draft pick gets a Bowman card, doesn’t mean he is any sort of prospect at all.

I run into my fair share of cards featuring guys who are basically fillers in Bowman [or any other brands like Panini Elite Extra Edition] products - if I have access to get the cards signed when they first come out, then it's doesn't hurt as much, but it basically sucks to be stuck with cards of 'never has been' types who are at times cut before I see them in-person. 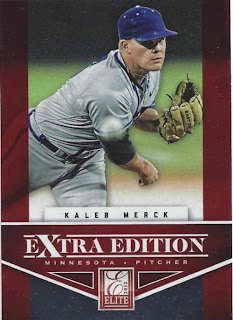 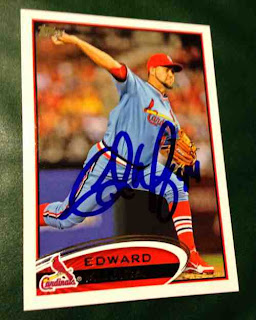 It took him several teams through parts of eight Major League seasons but it looks like Mujica has found his niche as a relief ace for the St. Louis Cardinals - the 2013 All-Star signed my cards when the Cardinals were visiting the Angels a couple of weeks ago.
Posted by Laurens at 3:22 AM No comments:
Labels: 2012 Topps Update, 2013 National League All-Star, Edward Mujica, featured autograph, in-person autograph, retro uniforms, St. Louis Cardinals, underrated idols 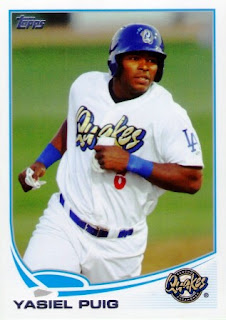 I read about a cheaper, 'retail' version of 2013 Topps Pro Debut and bought this on a whim [online through my phone] on the way home from a field trip three or four weeks ago - I don't think boxes are actually meant to be sold through big box stores but Topps made a cheaper option, presumably to cater for those who want the base cards for themselves.

I didn't do a pack-per-pack recap but on my sixth pack, I pulled a Yasiel Puig - so that probably paid for most of the box at this current time.

Cards I actually pulled from some loose [hobby] pack breaks

Besides Puig, I also pulled cards of guys like Byron Buxton, Anthony Rendon, Maikel Franco and others - 2013 Pro Debut retail is a fun, low end break if hunting for cards picturing top prospects, rank-and-file minor leaguers and the top prospects who've graduated to the Major Leagues in 2013. 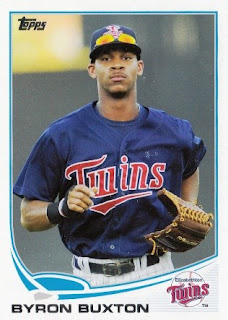 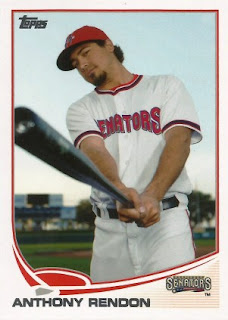 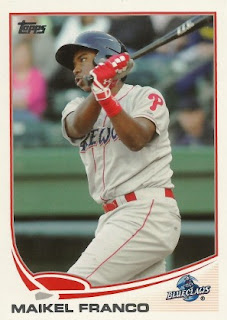 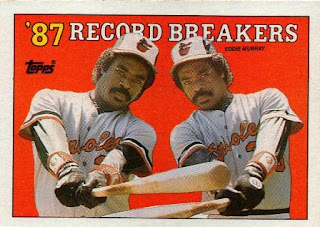 This repack promises 10 Hall of Fame cards - mostly from the junk wax era where they are a dime a dozen, so meh.