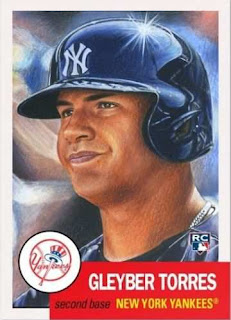 For me, it's been the year of the Topps Living / Topps Now cards - as far as random card purchases go, it fills the gap as far having a card or two to pick up that is timely and specific to a player or team.

I remember the old-school / junk wax era years of picking up cards of guys labeled as future stars, thinking you were going to have a gold mine in hand - in 2018, the definitive 'must have' cards of any young rookie are simply out of reach unless willing to spend hundreds and/or thousands of dollars on prospect cards.

On the other hand, it's fun to pick up a pair of rookie-year cards [$5 and change each] featuring the newest New York Yankees rookie sensation - since he could be a all-star talent in pinstripes for the next 10-15 seasons.

I tend to think that even if there might be 50,000 cards printed of this card - it will be absorbed by collectors and others for future considerations.

As a baseball fan who ends up objectifying players' careers through collecting baseball cards and autographs - it's fun to consider who are the baseball guys who have achieved some sort of national prominence in the game.

On a larger scale, it does make my head hurt when I stumble upon certain discussions on whether guys are superstars or not - there maybe a divide between the guys who account for more of the 'it' factor [does a guy look like a star, does he play the part of just kind of shies away from the attention] to qualify a player as a superstar vs. the experts who just throw out all the fancy, new age stats that are supposed to win the conversation.

MLB players seem to be more conservative, less flashy and because of how the game is structured around traditional values, there might not be that in-you-face guy that is going to be a household name - there is a big consideration as far as the guys who put up the numbers.

I'm just spitballing things out, maybe making this as a glorified slideshow to see which players capture my attention - which current guys I'd continue to collect or generally look for as far as cards go, even if most of these guys don't play for my 'home team.' 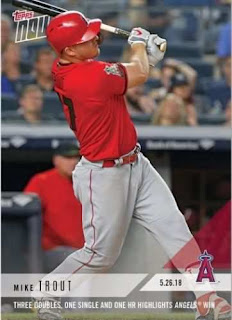 Mike Trout - Trout is definitely not going to create notoriety for himself so he's a little basic, but he's the All-American, metronomic 5-tool guy seemingly putting up historic numbers every year. 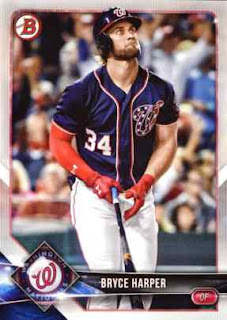 Bryce Harper - he's obviously a once in a generation talent, though I'm iffy on him because his counting numbers tend to fluctuate year to year for a supposed superstar.

He's also kind of arrogant, which probably rubs some people the wrong way at times - but because he's been the next great hope ever since he was in high school, he gets a pass otherwise for the occasional tantrums he throws.

For the numbers guys, his stardom has rested on his age and his OPS/WAR totals compared to legends and icons - he has the fame, but it's going to be interesting to see if can maintain an elite level of performance for a prolonged period of time. 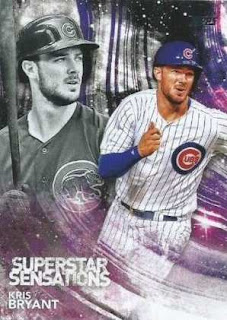 Kris Bryant - he maybe the best the sport can do as far as down to earth, no frills player who maybe the people's choice, whether you want him hitting home runs or doing set-up pranks. 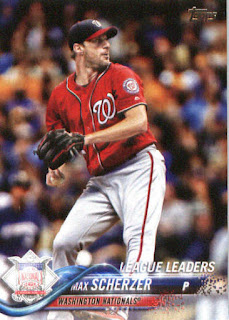 Max Scherzer - he is probably the most dominant pitcher in the game, though he needs be part of a championship team to sort of top off his accomplishments. 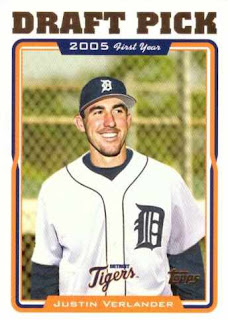 Justin Verlander - he might have been on the decline as far as being a No. 1 ace for a contender, but the trade to the Houston Astros last summer reinvigorated his career.

Verlander won a World Series championship in 2017 and this year, has been as good as he's been since his prime years with the Detroit Tigers - it doesn't hurt he is married to a supermodel and can be quite the Twitter personality. 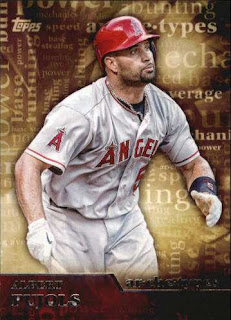 Albert Pujols - as long as he is an active MLB player, his accomplishments can't be denied, while all the work he has done off the field, being a face for developmentally disabled individuals in particular. 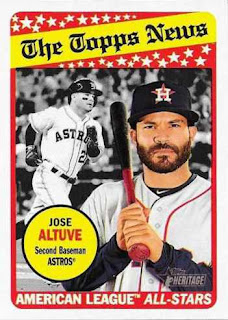 Jose Altuve - at 5′ 6,″ his improbable story as a professional baseball player and high level of performance makes him a superstar; he maybe the guy that takes the title from Ichiro as a universally loved player since people can sort of identify with the height thing. 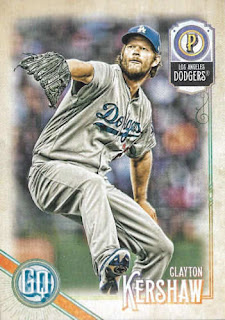 Clayton Kershaw - though he's 30 now and has gotten dinged up in recent years, he's been pitching golden boy of a longtime franchise for a decade; his 'faith based' humanitarian work humanizes him quite a bit. 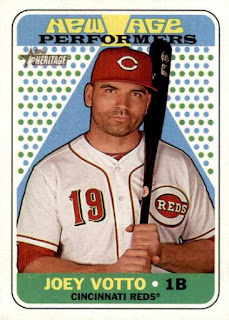 Joey Votto - he's toils for a bottom feeder MLB baseball team, but he's the only pro athlete who can be petty enough to disrespect the achievement of his own country's athlete and still continue to be bulletproof.

Smart, right baseball fans love this guy and it's got to be more than the fact his on-base percentage is well north of .400 - I personally see some of his antics as a bit boorish, though at least he is a very good player. 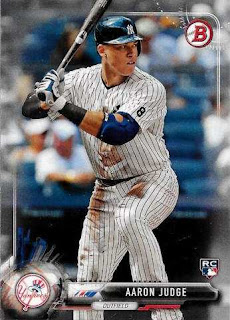 Aaron Judge - focusing on the good things he did in 2017 and playing in New York, he's a superstar but I want to see if how things play out at the end of the year before really going all in on the idea that he's elite.

Not quite there, but just about, knocking at the door 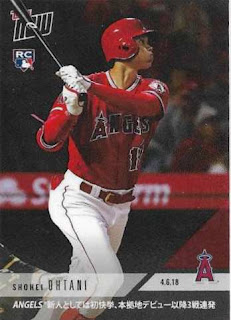 Shohei Ohtani - checked all the boxes as a superstar in Japan, but the Angels have been almost too careful about his usage, so the hype seems relatively muted among MLB fans. 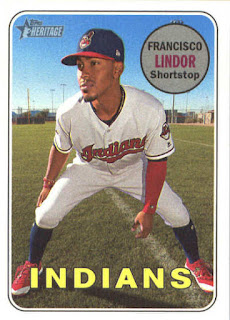 Francisco Lindor - has the personality, the ability but the only Cleveland player I know is Lebron James. 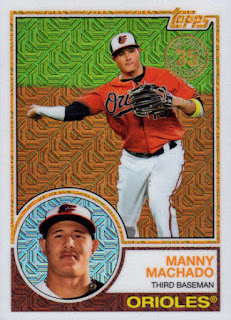 Manny Machado - puts up the numbers but it may hurt that he's going to be seen as more of a high priced mercenary and perhaps fans still ding him for flair ups in his career. 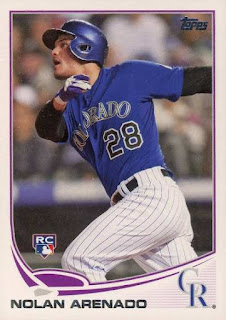 Nolan Arenado - probably the best third baseman in baseball but gets dinged for playing half is games in Coors Field and not being Kris Bryant. 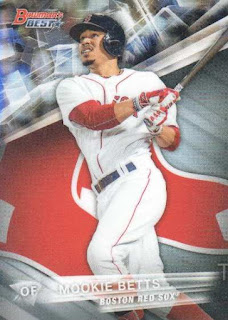 Mookie Betts - this guy has improbably put up superstar numbers and plays for a big market team.

It helps that he is very athletic and is probably quite strong - despite being listed at only 5'9" and 180 pounds.

I like the look of these 2018 Bowman Atomic parallels and picked up a couple to see how they would look signed - after the fact, any particular signed card is just another I can add to my collection, but I like how this one shines and reflects.

Kendall is a prospect in the Los Angeles Dodgers farm system - in 42 games so far at the Class A Advanced level, he is hitting .232 with 19 stolen bases and a .333 on-base percentage. 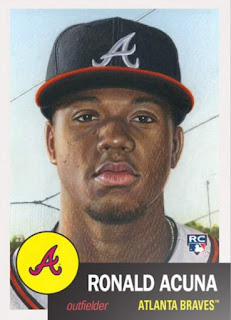 At the end of April I picked up a couple of copies on eBay for $5 each and just got the cards in-hand this week - wanting to keep up with the occasional hot rookie chase, I'm trying to see where I can channel impulse purchases from loose unopened packs and blasters to relevant Topps Now or Topps Living Set singles. 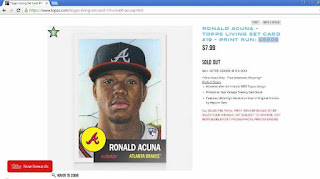 With over 45,000 cards made, no one was sleeping on these rookie year Acuna cards, though they should be nice cards to put away - according to what I've read on the Blowout Cards forums, these cards are condition sensitive, though ones I received had no obvious imperfections.
Posted by Laurens at 4:00 PM No comments:
Labels: 1953 Topps, 2018 Topps, Atlanta Braves, future considerations, Living Set, Ronald Acuna Jr., rookie year 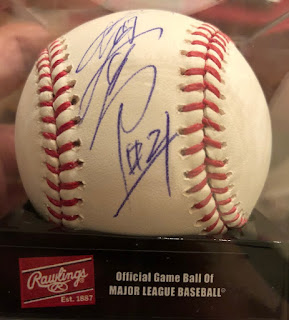 Sometimes I get baseballs signed by accident and this may have been one of them - I could imagine this could be an autograph of anyone, from a Little League star, to a high school phenom and first round pick who made his debut as a teenager.
Posted by Laurens at 3:50 PM 1 comment:
Labels: featured autograph, in-person autograph, mystery, random 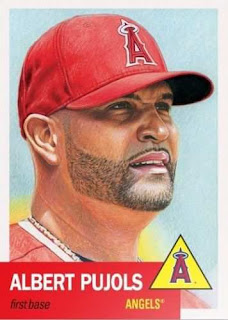 Pujols's Topps Living Set card maybe a topical pick-up since he collected his 3,000th hit and join three others with 3,000 hits / 600 home runs - it's not that I've completely warmed up to the Topps Living Set, but it's kind of a no-brainer to spend $5 on a Living Set card of a hot rookie or a guy from 'my team?'

Because it’s an ongoing set, I just don’t know if there will be any sort of completion or closure - but maybe a plan is to pick up Topps Living Set cards of Angels players when they pop up. 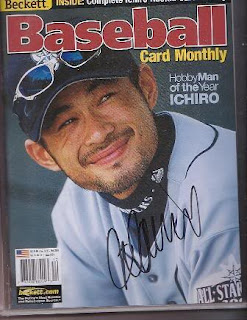 I'm afraid as the years pass and new players sprout, there will be less guys to count - but it's fun to go back and remember times when I've gotten someone like Ichiro's autograph in-person.

Now, the all-world hit king is stepping away for a bit away for a bit, likely maybe forever as a player - despite the feel good aspect of Ichiro signing with the Mariners in spring training, the team just couldn't carry his corpse any longer as one of the guys on the team's 25-man roster.

I don't exactly play the game I've seen fans do [through occasional posts on Web sites] where when someone accomplishes a feat, leaves the game as a player or gets into the Hall of Fame - they do a mental calculation whether if they've seen him play in-person.

Too many times where I'm at a game and the last thing I'm paying attention to is the action on the field - as odd as it may sound, it maybe harder to get into a MLB game in-person because there is just this huge separation from the cheap seats to the field. 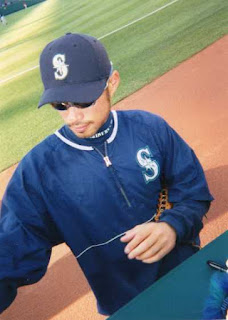 My up close big league action happened before the game started when players might have once come by the stands and signed an autograph - it's easier for me to mentally check off notable players whose autographs I've gotten in-person, than make note of the notable players I've actually seen play in-person.
Posted by Laurens at 4:00 PM 1 comment:
Labels: featured autograph, Ichiro, in-person autograph, Seattle Mariners
Newer Posts Older Posts Home
Subscribe to: Posts (Atom)