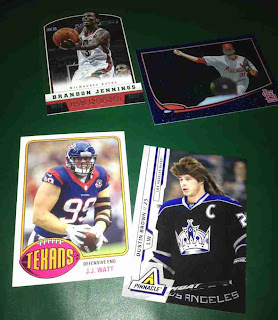 I actually found a base card of Aaron Hernandez I was going to pick up to put in my 'infamous' collection of cards featuring athletes who have gotten in the news for various transgressions - but then put it back in the 5,000 card box I found it in, afraid of the bad juju it might bring, especially since the guy has been charged with at least one murder. 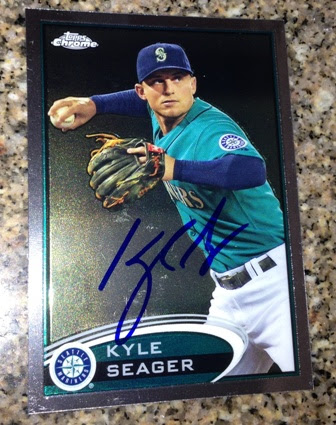 For the handful of prospects the Seattle Mariners have brought up and were expected to do something as Major Leaguers in recent years - it seems like Seager was the least hyped, but as put together a couple of solid seasons as a young, emerging talent.

Seager isn't quite an All-Star caliber performer yet - but Justin Smoak, Dustin Ackley, Jesus Montero have been sore disappointments so far and may not fulfill their potential.

As an autograph signer, Seager signs when asked and is fairly accomodating - makes him a decent guy in my book even if he plays for a division opponent of the Angels. 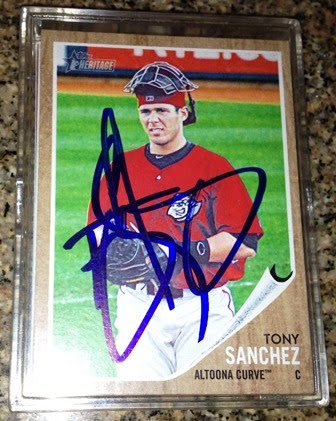 I brought three of Sanchez's cards when the Pittsburgh Pirates played the Angels last weekend - since he'd just been called up, it was a cool moment to actually see the guy on the field and get him to sign the cards I had for him.

As someone who tries to bring random cards to the ballpark to get autographed - it makes some sense for me to bring extra cards of guys currently at AAA since MLB teams tend to bring up or send down players on a regular basis. 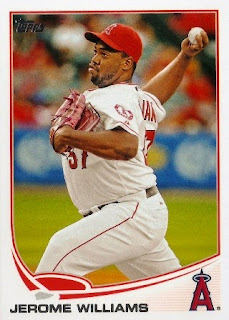 The tip of the blue Sharpie I've used for autographing endeavors was getting fat and I lost the only ballpoint pen I've used to get baseballs signed - I was sort of in a rushed state so I tried to find if they had any of the pens I needed at a Walmart, but I couldn't immediately find the two types of pens I needed.

I ended up ended up with a retail jumbo pack for $4.98 of Topps Series II - it seems like card releases have been slow, so I wasn't really paying attention when Topps Series II came out on shelves. 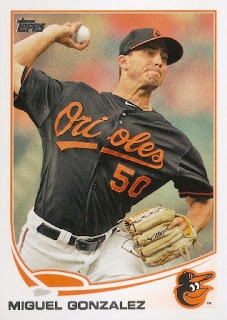 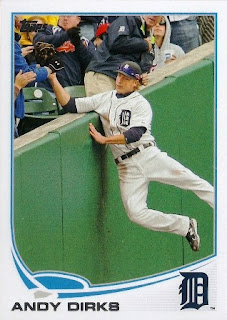 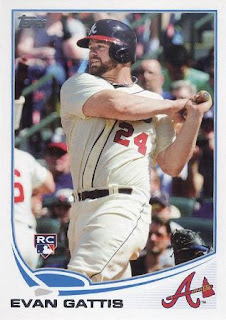 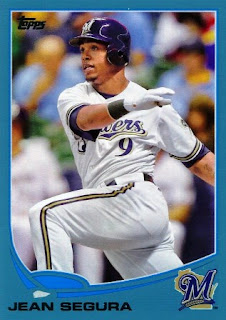 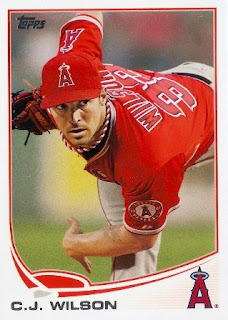 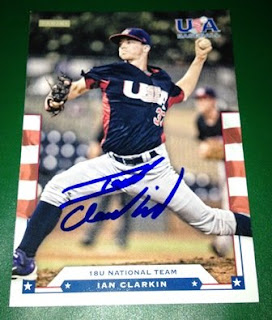 I picked up a 2012 Panini USA team set for $15 shipping at the beginning of the year - I wanted to pick up a base set [no inserts] of the boxed set so I'd have another set of cards of various players likely to enter professional baseball in the next three or four years.

One of those players in the USA set is Clarkin, who was signed this week along with second round pick, infielder Gosuke Katoh - when the New York Yankees visited the Angels, I told myself to bring the card of Clarkin since he was a Yankees' draft pick from Southern California [San Diego area] and I figured the Yankees would do something like invite him for an informal work out or something.

Both Clarkin and Katoh were waiting to enter the stadium hours before the Friday game at Angel Stadium and I was able to get Clarkin to sign his card - a handful of collectors had spotted both guys, making it easy for me to go where they were.

In five years I'm going to be wondering if I should have gotten Katoh's autograph too - though I was just happy not to get shut out that day.

It must have been really sweet for the two just to graduate high school and jump onto a MLB field to shag balls in the outfield or to take grounders at second base in the vicinity of guys like C.C. Sabathia, Andy Pettitte, Mo, Robinson Cano, et al - knowing that it was only a matter of time before they signed their first contracts to become professional baseball players. 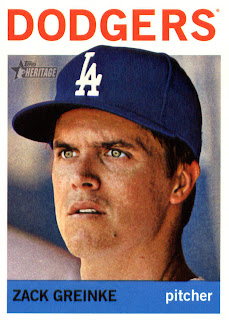 While he got a broken collarbone and missed part of the season, I thought Greinke got a free pass in his bean brawl incident against Carlos Quentin earlier in the year - however I caught a glimpse of the benching clearing brawl between the Los Angeles Dodgers and Arizona Diamondbacks Tuesday night and thought for as distant / goofy / aloof as Greinke is, he did right in plunking Miguel Montero after Diamondbacks starting pitcher Ian Kennedy had gone 'up and in' and beaned Yasiel Puig the inning before.

After having an explosive first week as a Major Leaguer, there was no question Puig was served up a 'welcome to the big leagues kid' message pitch - that reminded me of happened last year with Cole Hamels hitting Bryce Harper.

I'm tempted to say Ian Kennedy was sort of a punk in this whole situation - but I just watch the games and I'm not actually down on the field as a player or coach, so who am I to judge his intent? 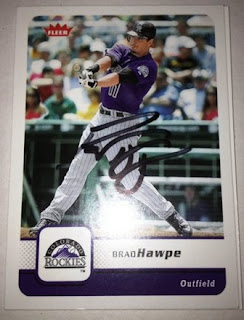 I'm not sure when I'm going to round up [or feature] any of the 2013 Angels autographs I can add to my all-time collection - I haven't done anything as far as determining which ones I have already, which ones I've gotten this season and which ones I still need.

One featured autograph I can put up is a TTM autograph card of Brad Hawpe I picked up through a forum several years ago - I also remember pulling a 2008 Topps Stadium Club certified autograph of Hawpe, but I'll probably use the TTM auto for my all-time Angels collection.

I realize the situations aren't at all comparable but the Los Angeles Dodgers can call up a stud like Yasiel Puig - while the Angels end up bring up a guy like Hawpe from oblivion.

A late bloomer, Hawpe had some nice seasons with the Colorado Rockies - but for whatever reason his bat ran out of juice and he has bounced around with four different teams before the Angels signed him this season to serve as AAA depth.

I've noticed he kind of holds his bat in a peculiar way and it's kind of funny to watch him hit - he and Anthony Rizzo of the Chicago Cubs look sort of the same when they are at the plate.

I'm not counting on any sort of success but hopefully this guy will be of some use to the Angels - even if he is pretty much cooked as a MLB hitter. 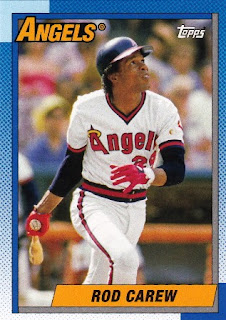 2013 Topps Archives blaster [$19.99 from a Target] - I have a hand-collated base set coming in but maybe look to bust at least one blaster of any new Topps baseball product.

I don't mind the thin stock but Topps could have gone all the way and used 'primitive' cardboard stock - like the original Topps cards these are supposed to mimic. 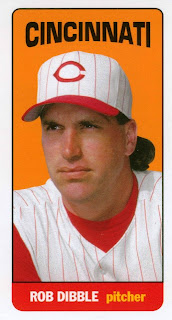 #MT-RD Rob Dibble - Mini Tall Boy insert; it's not any taller than a regular sized card but it looks different because 1/3rd of a regular sized card has been cut off; Dibble is covering Angels games for some media outlet and I just got him to sign three more random cards, so this one should be inked up in-person at some point this MLB season.
#141 Adam Jones
#151 Jason Motte
#28 Mike Schmidt
#65 Paul Konerko 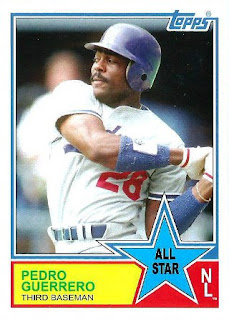 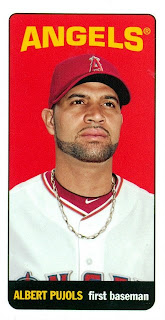 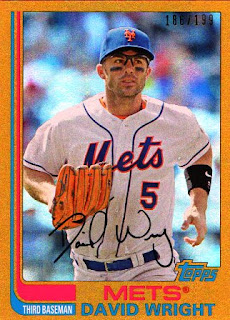