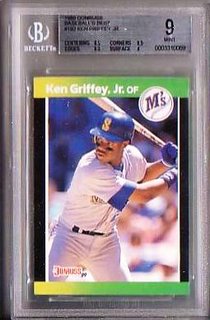 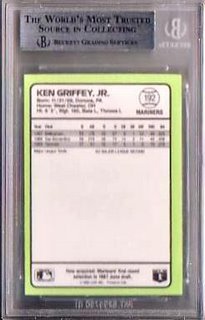 Posted by Laurens at 1:36 AM No comments: 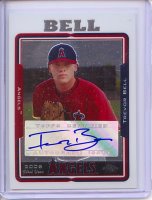 Mail Day
A 2005 Topps Chrome Update Trevor Bell autograph [$5.99 BIN plus $2.25 s/h on Ebay] made its way onto my mailbox on Thursday. This card wasn't a bargain and he is a pitcher as opposed to a hitter, but I figure to pick this card up of Bell's status as the top draft pick of the Angels in 2005.

FYI: He is also Bozo the Clown's grandson - that has to count for something.
Posted by Laurens at 12:32 AM No comments: 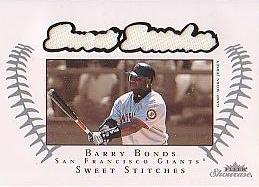 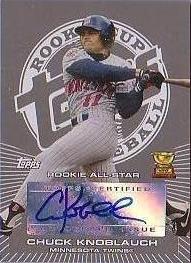 Also, a 2005 Topps Rookie Cup Chuck Knoblauch autograph [$4.99 BIN plus $2.00 s/h on Ebay] made its way onto my mailbox. I was looking for an Knoblauch autograph, since I sold the autographed card that was signed through a mail request back in the late '90s.

That autograph was on the card [a 1991 Upper Deck], this autograph is certified and on a holographic sticker affixed onto a card.

It ends up being another addition [or upgrade] to my award winners collection - 1991 American League Rookie of the Year style.
Posted by Laurens at 5:35 PM No comments: 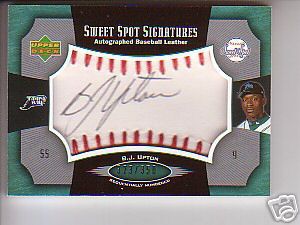 I remember last month, wanting to spend so much time later into the night, the early next morning [1/10/06] just looking for another certified Upton autograph that I had purchased. I ended up finding it in a random bubble mailer that I use for storing various cards.

I think he is going to be a star though and I wanted a Sweet Spot Signatures autograph insert of Upton. Unfortunately, the card I received was crammed into a semi-rigid card holder and it has a nicked corner with a little paper loss. I'm not sending this back to UD - I lost a 2004 Sweet Spot Signatures autograph insert of Delmon Young because I felt I needed to send it back to Upper Deck because it was damaged a little bit. So far, I have not received it back...

The image of the Upton is from the Ebay auction I won.

Picking up the 2005 Bowman Draft set ended up to be pretty good - shipping was only the price of a single card [$3] as opposed $5 or more [and the actual amount the set was shipped for was $5.33].

It came with a 2005 Bowman Draft AFLAC redemption and the seller also included bonus fillers cards consisting of 2005 Bowman Draft gold. Out of the blue, I was possibly looking for Andrew McCutchen, D.J. Houlton, Cesar Ramos and Travis Buck cards and all four were among the bonus filler cards...

Picking up a card of Young was pretty expensive [close to $5 shipped], but I think his Topps Update card was a rookie card and a rookie-year card [confused?] may be a 'prudent, low-end' purchase for the near future [if he develops into a star].
Posted by Laurens at 6:23 PM No comments:
Newer Posts Older Posts Home
Subscribe to: Posts (Atom)