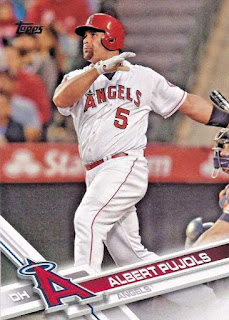 Go figure, the Angels are right there in the chase for an American League Wild Card spot [68-65, 1 game behind the Minnesota Twins] and while Mike Trout has recently been mired in a slump on his own - it's hard to watch another rally killing ground ball hit by Albert Pujols to the left side of the infield while he can barely run it out to first base.

Unfortunately, Pujols isn't going anywhere, but it would be nice to see him come up clutch with the bat over the last month of the season - Pujols has proven to be a 'money player' before, but his turn in the lineup has just a black hole of suck.

At times I feel like the old man that he is, still grinding it out, like the good pro that he is - but I can only take so much out of his recent performance and from fan to player, Pujols needs to put up numbers fast. 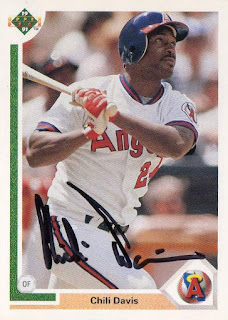 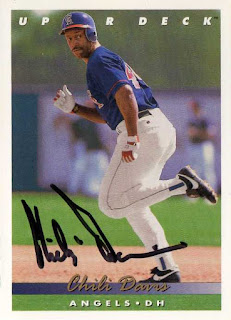 Davis signed my two trading cards in black Sharpie in about 12 days c/o The Boston Red Sox, where he is the hitting coach - on SCN, it looks like successful responses are spotty at best but I must have seen a posted success on another collector's Instagram account and figured to try and get a couple of my loose Angels cards signed.

I was thinking I might not get my cards back or if I did, it would be one of those situations - where my SASE randomly shows up out of nowhere after a couple of years. 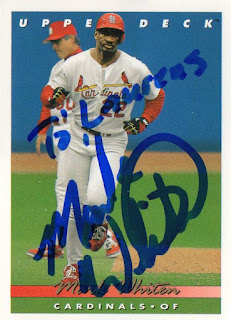 The former MLB outfielder personalized and signed my trading card in about 4 weeks - Whiten's most memorable big league game was when he slugged four home runs against the Cincinnati Reds in 1993.
Posted by Laurens at 4:00 PM No comments:
Labels: 1993 Upper Deck, autograph requests, insert, Mark Whiten, St. Louis Cardinals, through the mail autographs 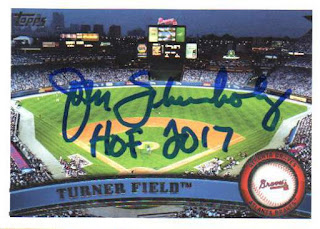 The longtime general manager and president of the Atlanta Braves signed my two cards in blue Sharpie in about 10 days - I saw that the 2017 Hall of Fame inductee was a pretty good signer TTM, but since I didn't have anything in particular to send him, I figured why not send him a couple of 'generic' team cards. 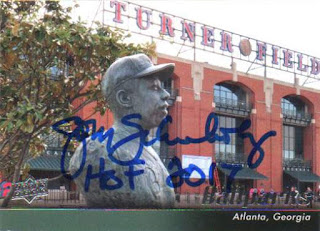 I like the fact both cards came back with nice, bold autographs with 'HOF 2017' inscriptions - Schuerholz also briefly responded to my letter asking about whether he had to huddle up with the on-field manager and pitching coach to sell a pitcher on being a reliever as opposed to a starting pitcher.

"Yes we did," Schuerholz wrote. "Psychology is a worthy and valuable tool." 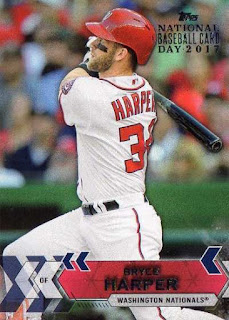 It was probably not in the spirit of national baseball card day, but instead of ending up at a card shop to pick up a NBCD promo pack as well as spending $10 to get some sort of Mike Trout bonus card - I ordered a set of 29 cards [plus the Trout] on eBay for about $15.

At the very least, I've gotten all the cards in-hand as opposing to having to trek to participating card shops [I only really go to one anyway] - to see if I can pick-up multiple packs, just to sort of come up with a complete set

While these cards are really designed to promoted the baseball card hobby for a younger demographic - it's fun to go through a current-year card set with a distinct design.

Jered Weaver - a tribute to a franchise ace 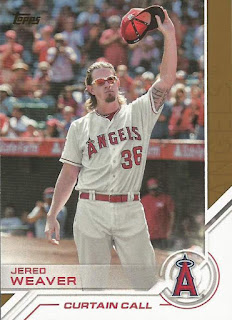 Weaver was a starting pitcher who to put his heart and soul for the Angels, winning 150 games for the franchise - he was a hot shot rookie posted an 11-2 W-L mark with the Angels in 2006 and established himself as an No. 1 guy several seasons later.

In his prime, Weaver chose to stay with the franchise on a 'hometown' discount - he won 20 games and threw a no-hitter in 2012.

There might have been a natural inclination to compare Jered with older brother Jeff, who was already a veteran MLB pitcher - when Jered was starring at Long Beach State.

However, Jered seemed so much better than his older brother - even if Jered's last couple of years in an Angels uniform were tough, especially as his velocity had drastically declined. 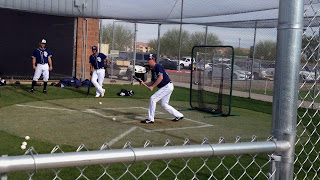 The last time I saw Weaver in-person was when he was with the San Diego Padres in spring training - he was participating in a bunting drill with the other Padres starting pitchers.

No one is going to remember Weaver's final MLB season with the Padres, where he was 0-5 and allowed 16 home runs in 42 innings - it would have been nice for him to enjoy some kind of bounce back season, though that never did materialize and after 12 big league seasons, the 34-year-old made the decision to retire. 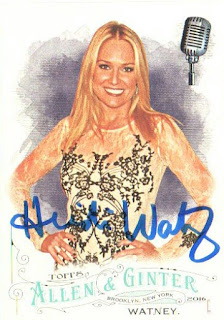 The MLB Network host and reporter signed my two cards and personalized one in about two weeks or so - I was going to scan the personalized card with the 'God Bless' inscription but the card pictured 'jumped' out of my SASE and onto my scanner bed.
Posted by Laurens at 4:00 PM No comments:
Labels: 2016 Topps Allen and Ginter, autograph requests, Heidi Watney, MLB Network, personalized, through the mail autographs 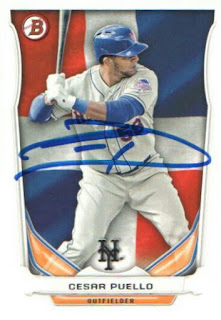 Puello was picked up as AAA depth by the Angels earlier in the year and made his MLB debut Wednesday afternoon - going 1-for-4 with two stolen bases and RBI in the Angels 5-1 win against the Baltimore Orioles.

I was able to get a few of my cards signed by Puello at spring training this past year when he was at Texas Rangers camp - the 26-year old outfielder was a one-time prospect with the New York Mets until a 50-game suspension and injuries derailed his pro career. 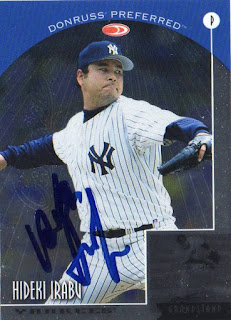 I got Irabu to sign this card during his stint with an independent league baseball team back in 2009 - as much as I'd like to say he was this import from Japan who turned into an ace quality MLB pitcher, his professional baseball career in the United States became a sore disappointment, if not an outright joke.

As is, I don't really know if there was more to his life off the field - however, reading this Sports Illustrated story does paint a bleak picture of a guy who never belonged and was kind of a tormented, aimless soul.