I may have been the last person on Topps Million to find I actually had trade offers for cards I have in my collection - I ended up trading the 1956 Topps Glen Gorbous I had for a 1958 Topps Don Cardwell and a 1961 Ted Lepcio.

I don't know the logic I used in accepting the trade offer - while Gorbous was the oldest card I have at Topps Million, all three cards involved in the virutal trade were not worth much at all, so why not trade a single 1950s era card for two cards [one card still from the 50s and one card from the 60s].

The Topps Million Card Giveaway promotion ends in about a month or so - I wish I had a Stephen Strasburg or Mickey Mantle Topps card I could attempt to get in-hand, but oh well.

If I did want to get the cards I have in my collection in-hand however - what is the difference getting the cards from eBay instead of Topps?

If I actually wanted my Cardwell and/or Lepcio in-hand, I might as well snatch them up on eBay - it isn't like I'm going to be getting better condition cards through the Topps Million promotion.

I pulled two Million Card Giveaway code cards from my last Topps blaster box break from the previous post and was going to hold off since the cards are fun to redeem if you are looking for a couple of minutes of boredom to kill - I did get the itch to put the codes into the system sooner than I thought, even though it looks like it was spitting out crap cards [well at least crap cards from the last 20-25 years instead of cards from the last 35 years or so].

My first card was a 1986 Topps Gary Carter - he is the only Hall of Famer I have in my collection at Million Card Web site, though the card is still an 1986 Topps card and I picked up a few 1986 Topps star cards [Ryne Sandberg, George Brett, Mike Schmidt] a show for a dime each several months ago.

My second card was a 2002 Topps Rico Brogna - I thought I was actually looking for a Brogna card, though it is a 2001 Fleer Tradition card that may not actually exist, so scratch that notion.

Some baseball cards for Christmas 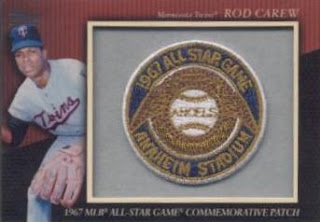 For Christmas, my brother actually bought me some baseball cards - a blaster box of Topps Series II [with two Throwback packs] and a retail version of the 2010 Topps USA box set [the $9.99 retail versions contain just the base USA set with no hits compared to the 'hobby' version with about 10 various game-used / autographs hits per box and around a $120 SRP].

Commemorative Patch Card
MCP 54 Rod Carew - 1967 All-Star Game commemorative patch; the manufactured patch card commemorates the last time the Angels hosted an All-Star game before this past season, so it is a nice pull [even though former Angels' star Rod Carew was still a Minnesota Twins' player at the time of that particular All-Star game].

The rest of my packs were a usual mix of inserts and base cards - I did get another Rod Carew insert, a The Cards Your Mom Threw Out insert original back of his second-year 1968 Topps card. 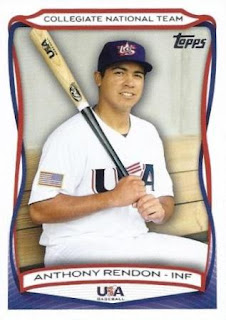 I was surprised to see this box of USA set, though it is marked $9.99, so it must have been made to be purchased at Target / Walmart type stores - kind of disappointing there was not one token hit inside, but I guess that is how it goes. Actually, I got an extra base card of George Springer [#USA-41] in the set, so maybe that is my 'token hit.'

The best card in the base set maybe Anthony Rendon - he spent only three days with the U.S. National team in 2010, before injuring his ankle. 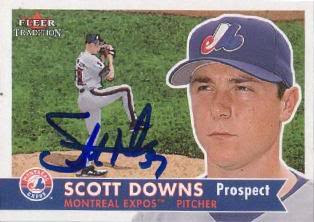 After putting it off for so long because I thought the task might be daunting - I recently only started to 'dig through' my box of 2001 Fleer Tradition autograph setters and list the cards in a database.

After picking up a complete factory set in 2001, I decided to get as many of the cards autographed either in-person or through the mail - I think Angels free agent pick up Scott Downs' autograph was acquired in-person, likely at an Angels / Toronto Blue Jays game in Anaheim. 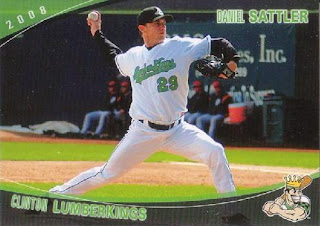 OK, so I guess Sattler isn't technically an Angel yet [or might not be at all] - but the organization did pick him up from the Oakland Athletics in the AAA phase of the 2010 Rule 5 Draft.

After seemingly just missing out on Carl Crawford, it is just awesome to learn this guy is your favorite team's latest pick up - I'm hoping against hope that bouncing around a little bit in professional baseball gives Sattler an opportunity to get to the Major Leagues and help the Angels in the bullpen in 2011.