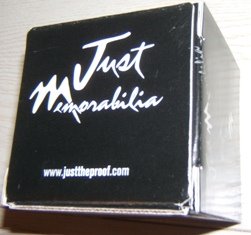 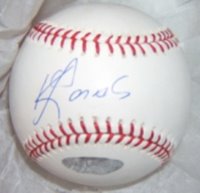 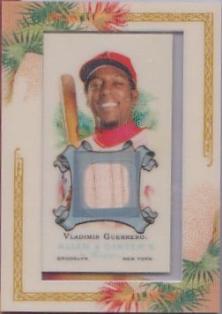 I also got a 2006 Topps Allen and Ginter Vladimir Guerrero bat card [$3.00 plus $2.00 s/h on Ebay]. I don't want to care for common bat/jersey cards, though the novelty makes it okay sometimes. On the other hand, the bat used could be a Vladimir Guerrero store-model bat, used by Topps' employees at the park, which would defeat the purpose of having a game-used bat card featuring a favorite player.
Posted by Laurens at 12:34 AM No comments:

Some loose pack breaks
Picked three hobby packs of 2006 Topps Allen and Ginter [$3.75 each/three for $11] at a show last Saturday and two more retail packs at Target [$2.99 each] to see what the buzz was all about. The only card I got of note from the hobby packs was a Ryan Langerhans short print [#151] and a Ervin Santana [#51].

The cards themselves are nice looking, though my five pack pick up seemed more like wanting to drink water because I was thirsty, but only getting a few random drops.
Posted by Laurens at 3:31 AM No comments:

Regional collecting
I'm supposed to be a California/Anaheim/Los Angeles Angels' fan, but I've missed out on picking up some key cards of young players that have come up from the minor leagues and have helped the Angels' chances to stay afloat in the pennant race this season.

Maybe I've been lazy and ambivalent over baseball card collecting in general, but I still collect and read enough message boards featuring baseball cards, the Angels and prospects in general. I'm no stranger to websites like futureangels.com and baseballamerica.com.

I've got an account on Ebay, so I should have already had particular cards of particular players [from my team] in-hand before all the hype takes place. I kind of feel left out of the picture, though I probably had my reasons for my 'no-action' as far as not picking these guys' cards up.


Now, is it worth my time going through the reasons or am I just SOL?
1.) I'm an uber cheap collector and perhaps the initial prices for some of the cards was already at relatively high levels. I realize that I'm not into flipping cards for a profit. Rather than follow the herd, I'm more apt to be conservative and want something for my personal collection. I have recently speculated on a couple cards [2005 Bowman Draft Chrome Ryan Zimmerman refractor autograph/2005 Upper Deck Signature Edition Kendry Morales update autograph], but didn't want to worry whether or not Weaver will turn out to be the next Mike Witt or Jeff Weaver, as I see myself looking for more position players.

2.) There is a competition factor among the die-hard team collectors and I don't want to feel like I'm some kind of poseur by jumping into the fray.

3.) I don't want to admit I missed the boat, but best time to pick up cards of these guys is definitely not now. I do realize that what comes up, must come down eventually.

4.) I'm more of an autograph collector [in-person/through the mail], than a card collector. I'd rather get Weaver and Kendrick's random signed autographs, than get their rookie cards/rookie year parallels. If I think they are good enough, then I try and get them on an official Major League baseball and I'm happy with that.

5.) Still, maybe I don't show enough confidence in your team's top prospects, both long-term and in the short-term run. I didn't care to realize the potential of a guy like Weaver, who was in some circles, pimped as the next Mark Prior. Maybe I just didn't see guys like Weaver or Kendrick coming up until some time next year.

In 2006, it seemed like a whole roster of first year players have come up and made immediate impacts. Weaver, Kendrick and Saunders are just three of those guys that have already impressed.

6.) Kendrick projects more as a guy who is a good all-around player, with the potential to win batting titles. Does anyone see him putting up Alfonso Soriano numbers? Maybe he is another Ray Durham or someone who puts up all-star numbers, but not superstar numbers.

7.) Saunders probably should have been my guy for much of the last two years. While I look for PC cards, he was injured and there were downpoints when his cards were dirt cheap. Unfortunately, it isn't like I've sought out his cards out at a show. He maybe the guy among the three who becomes decent, but is generally unspectacular over the course of his career.

Now, I think I'm going to be a little more proactive in seeking out rookie cards/rookie year issues of any Angels' prospect who may give the parent club its next productive player.
Posted by Laurens at 6:03 AM No comments:

Baseball card collecting is not a warm-weather hobby
Who wants to be thumbing and sorting through cards, when it is so nice and sunny outside? Pity the fool who would rather be inside playing with his cards or has no other 'default' choice, other than to flip through his brick of useless commons.

I can't come up with a collecting theme that compels me to be focused [with time, effort and $$$]. All my cards and other stuff are 'housed' in my room and it is hard to be enthused with anything when your abode is a furnace for much of the late afternoon.
Posted by Laurens at 4:38 AM No comments:

I casually looked the card up in an ancient [circa 1996] Mo Vaughn Beckett magazine [that I have for reference] and I was dismayed that it was actually Niekro's second year card. I was bummed because I was thinking that this card was going to start my 'vintage' rookie card collection.

I think the fact that it isn't Niekro's actual rookie card shows how impulse bidding [on Ebay] bite you in the butt, especially when you don't do simple research such as checking whether or not a player has had a previous card issued - when you are .

It took me about two weeks to send finally payment about a week ago for the card [$26 plus $4 s/h] and while there is buyer's remorse, I think it is a nice looking card that is going to stay in my personal collection.
Posted by Laurens at 8:13 PM No comments:
Newer Posts Older Posts Home
Subscribe to: Posts (Atom)