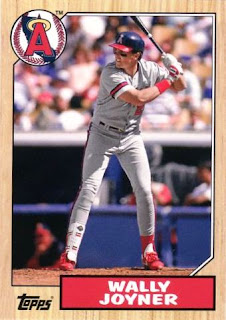 I build up a stack of cards from several quarter boxes at the card shop I go to - a silly ritual I obsess over is playing which cards I'm going to whittle away from my stack.

I wonder why I just don't spend whatever it takes to pick up a whole stack of cards to flip through instead of putting cards back for whatever reason - maybe it's just one of those quirks where I don't see much value in spending more on cards that are not going to be worth anything more than what they are.

Where is Albert at this point? 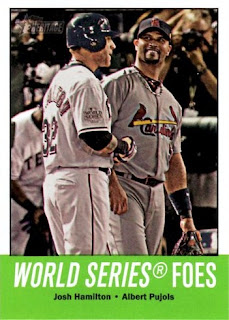 With the emergence of Mark Trumbo as a potential All-Star, at times I wonder if the Angels needed Albert Pujols - by his sheer accomplisments alone, Pujols makes the Angels brand better; he never takes a play off, run the bases well, plays defense adepty and still has the ability to change any particular game.

On the other hand, he's put up pedestrian numbers in the first half of 2012 and has been a disappointment of sorts- I'm always checking to see his numbers on ESPN.com, wondering if his numbers are going to be in line with what he's put up with his old team.

I'm still kind of wondering where is that prolonged streak when he carries the team for two or three weeks at a time - I'm hoping he finishes up with some strong numbers but at times I feel like I've got more confidence in other guys putting up numbers.

- He needs to have a couple of 10 home run months and at least five multi-home run games - at times it seems like his ability to crush the ball on a regular basis has been sapped and it would be cool to see him tee off on some pitchers.

- He needs a long hitting streak [maybe 20 or more games] - I haven't really seen where Pujols has been consistently great, so he needs to be on a roll where he's pushing his batting average up to about .300 and make it seem like he's getting hits in 15-20 consecutive games.

- He needs to push his on base percentage closer to .380 and his slugging percentage closer to .550 - those might not be vintage Pujols numbers in those areas, but if he gets to putting up an .930 OPS, it's a reminder that he is still in the mix as of the top commodities in Major League Baseball. 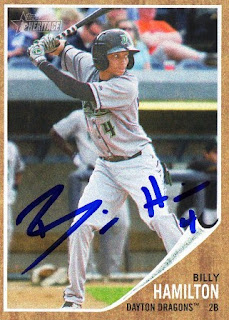 Billy Hamilton of the Bakersfield Blaze signed my 2011 Topps Heritage Minor League card last Sunday - in about two seasons, he has stolen about 200 bases.

I can't really explain the impact of Hamilton's base stealing feats, so perhaps this article from the Hardball Times - may put things into some context as far as the value of stolen bases and what Hamilton has accomplished so far. 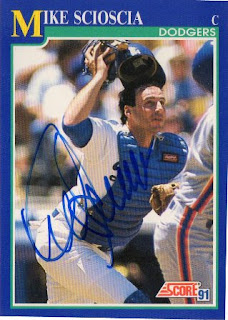 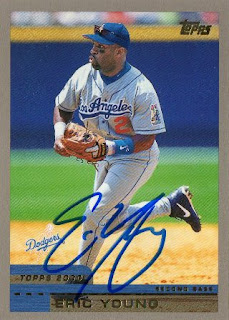 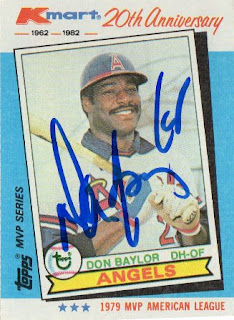 I decided to see what was going on with the in-person graphing scene since [as a baseball autograph collector] it's been a dry spell for me the last couple of weeks - I went to Angel Stadium and was able to get three guys before Sunday's day game, until leaving early to go to my sister's house for Father's Day lunch.

Mike Scioscia (1) - I got him to sign a 1991 Score card I probably should have gotten inked up two weeks ago; missed out on the Arizona Diamondbacks players [and some of their notable coaches like Matt Williams and Alan Trammell] while waiting for Angels to drive in.

Don Baylor (1) - I like how his autograph looked on the 1982 K-Mart card, though I wish I had an original Topps card for him to sign, even though I've gotten him at least several times in the past 10 years. 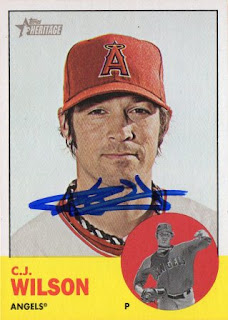 I hadn't gotten Angels starting pitcher C.J. Wilson's autograph at all in the 2012 MLB season but was finally able to catch him as he signed before a game during the Angels last homestand - Wilson was on the phone, apparently talking to a local high school pitcher named Kyle Twomey while signing autographs.

As Wilson took items to be signed - he told the fans waiting to congratulate Twomey for being drafted [by the Oakland Athletics]. 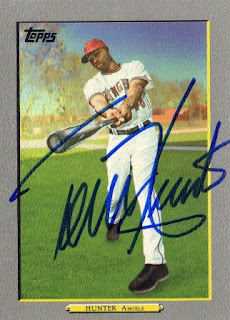 Hopefully Torii Hunter's monster series [9-for-15 with three home runs and nine RBI] in Colorado will be a sign of things to come - after dealing with personal issues and some rustiness when he finally came back to the Angels, it's nice to have him come through big for the team this past weekend. 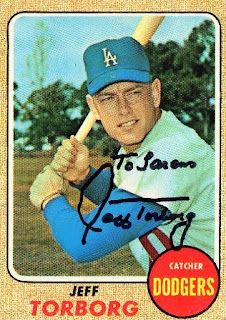 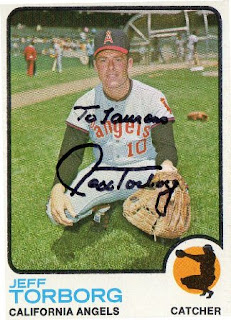 Jeff Torborg c/o home - the former MLB player and manager personalized and signed two cards in black ink and kept a 2003 Topps I sent; this request was mailed 12/7/11 and received on 6/4/12.