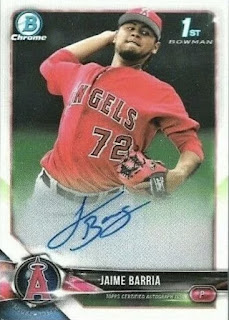 After a solid rookie season in 2018, maybe Angels manager Brad Ausmus and/or pitching coach Doug White didn't like what they saw from this guy in spring training this past year - so in his sophomore season, Barría was never able to get into any sort of groove, bouncing back and forth between AAA and the big leagues.

Who knows if Barría will get a serious opportunity to pitch for the Angels in 2020 - but for my all-time Angels autograph collection, I was able to add this certified autograph. 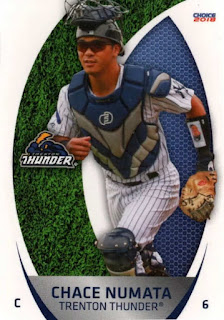 I didn't know anything about this minor league catcher, but grabbed a card of his when I saw a Tweet where his organs were donated to save five lives - as it goes, despite the fatal circumstances of his passing, he's been immortalized in my collection as someone who was able to help those in need.
Posted by Laurens at 11:00 AM No comments:
Labels: 2018 Choice, beyond the glory, Chace Numata, Detroit Tigers, eBay, New York Yankees, Philadelphia Phillies, R.I.P., Trenton Thunder 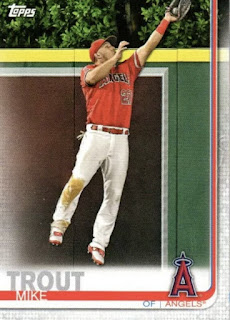 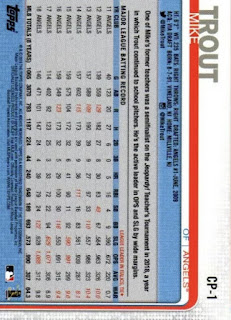 I didn’t know what this set was but after reading the Baseball Cards Come to Life! blog and doing some quick searches on eBay, I picked up a copy of the Trout - there maybe a number of oddball and/or regional Topps issues each year that maybe distributed as promos through different brand tie-ins.

To get suckered into paying a premium to pick up any one particular card is a little silly, especially when the oddball mirrors the flagship card of the player except for some cosmetic changes - still, maybe a little FOMO was in play as I missed out on picking up a couple of current year specialty issues outright, like the 2019 Topps Utz and 2019 Topps Walgreens yellow Trouts.

Cards from this set have different numbering as part a promo tie-in for the company that does expedited security screenings at the airport - I was hoping these cards were only released through airports, making the distribution a little bit more peculiar, thus making the cards seemingly harder to find under normal circumstances.

After the fact, it looks like the cards were more likely [but not outright] stadium giveaways at MLB games - since the Clear screenings have expanded to big league ballparks as well. 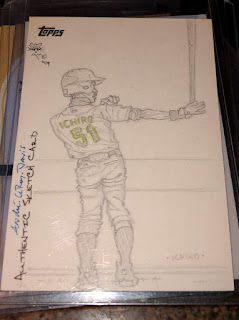 I was digging around some monster boxes at a dealer's card show booth when I found this card - I had to pick it up based on the idea this would be a cool find if it was an actual sketch card, rather than some sort of preprinted copy. 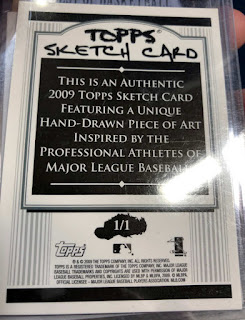 After the fact, I did some research about this 10-year old insert - from what I assume, the cards from the set didn't have a more common version and this particular card was probably the real deal as far as an artist working on depicting the athlete shown.
Posted by Laurens at 6:27 PM 1 comment:
Labels: 2009 Topps Updates and Highlights, André LeRoy Davis, card show trip, Ichiro, random, Seattle Mariners, sketch card 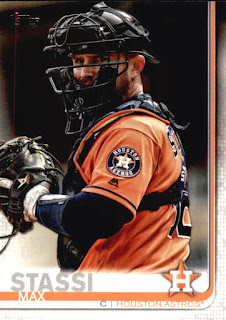 Flagship Topps is fairly common, but with a chance to pull rookies and rookie-year parallels - there might be a chance to buy something unopened at a big box store on a whim and find a card that might be worth something.

I bought this along with the Topps Heritage High hanger box featured in an earlier post - maybe due to the 'better than a blaster' type posts on other card blogs, maybe I'm looking to spend a random $20 and tax on something than a lone blaster box of any baseball card product.

I prefer a little more variety and maybe a workable compromise I came with to get my fix - was picking up hanger boxes of two different Topps branded cards, rather than a single blaster. 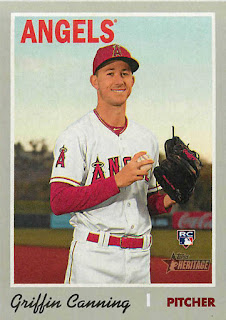 Did I need some retail therapy [?] - I don't want to go add more redundant cards to whatever claptrap I have that I consider a collection, particularly when I'm not as emotionally attached to either MLB or its players towards the end of the season.

On the other hand, cards are familiar to me and there might be a little bit of FOMO - as far as getting an chance to buy a retail blaster or hanger box right now to possibly pull a rookie card or rookie-year parallel of a rookie star like Pete Alonso, Vladimir Guerrero Jr. Fernando Tatis Jr., Eloy Jimenez, etc. 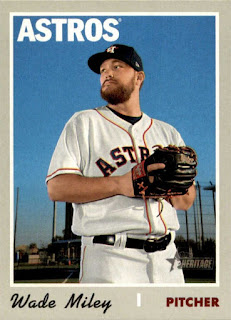 #562 Wade Miley - the last two seasons have been bounce back years for the veteran lefty, but busting a big league baseball card product, the run of retread players never ceases to bore me.
#668 Leury Garcia
#586 Daniel Descalso
#685 Anthony DeSclafani
#600 Jeff Samardzija
#524 Griffin Canning - I’ve had different kinds of Canning prospect cards, but this is one with the MLB/MLBPA rookie card logo, so that means something right? 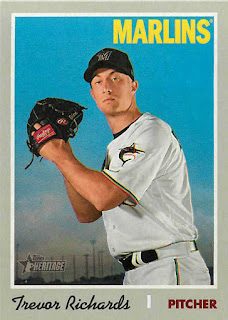 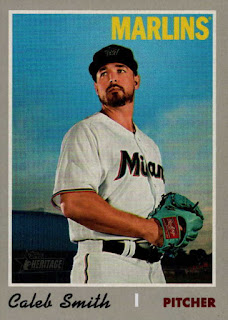 #699 Caleb Smith - the last two guys [Richards and Smith] are not quite retread veterans, but seem pretty anonymous for me to care about.
#606 Domingo Santana 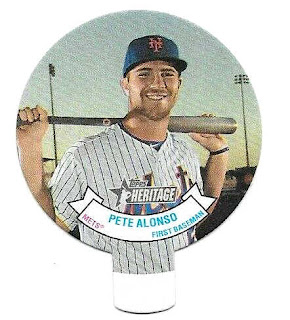 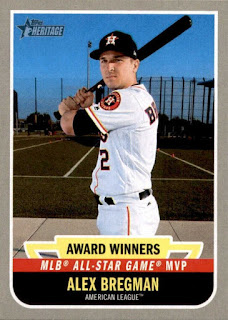 #AW-8 Alex Bregman - Award Winners insert; maybe he gets some narrative votes for the American League MVP, but the writers are intent on making sure the sheer excellence of Mike Trout's year-to-year numbers never gets taken for granted. 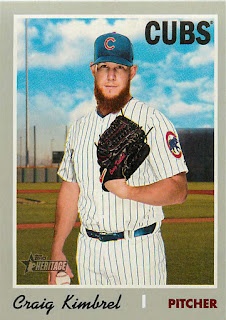 #574 Craig Kimbrel - he seems like a probable Hall of Famer, but the past couple of years have been a mixed bag, whether pitching in the postseason in 2018 or starting this past season in the middle of the year. 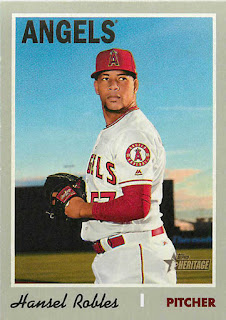 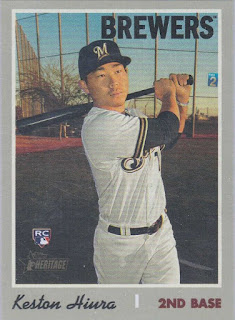 #512 Keston Hiura - he might be the rookie whose card I wanted to pull, besides the obvious guys mentioned.

The first time I was ever aware of Hiura, was when he played for Team USA in 2016 - I literally thought of him as just another guy and didn't bother getting his autograph.

I didn't anticipate him being a first round pick in 2017 - while emerging as a future hitting star in the middle of a big league lineup two or three seasons later. 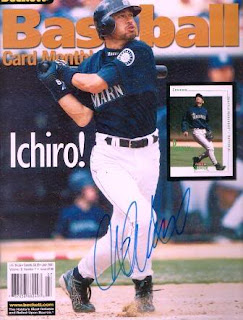 A monster box rummage - yields a pair of 1990s inserts 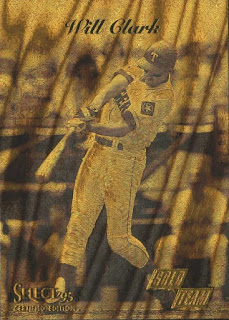 1995 Select Gold Team Will Clark #9 of 12 - to juice up my notable player binders by decade, it should be a no brainer to pick up loose inserts, particularly if they were the UV coated inserts from the mid through late 1990s. 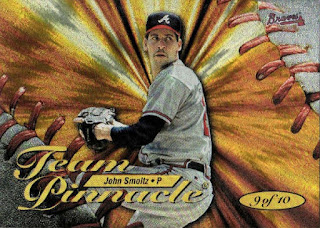 1997 Pinnacle Team Pinnacle John Smoltz / Andy Pettitte #9 of 10 - I tend to think dual sided cards are a little odd, a little irregular, but it's a shiny insert with a Dufex finish [at least the 'front' with Smoltz pictured].

This card caught my eye because it actually pictures Jackson as an Angel and I’ve wanted a Jackson autograph for my all-time Angels collection - I got a reluctant Jackson to scribble on a golf tournament program 10 years ago, but the booklet with celebrity participant bios and sponsors was a throw away item for me, meant to be lost somewhere.

I’d probably have to make the autograph a cut, then send it to PSA/DNA to be slabbed - so it would be harder to fit into my collection of all-time Angels autographs outright, with my collection mostly being trading cards.

FWIW, I don’t know if a trading card booklet would fit into my all-time Angels autograph collection either - but it is still otherwise a card I can add to my regional PC as well, even though a Bo Jackson Angels booklet card seems simply odd in general.

I remember 'Bo' being a two-sport superstar, who was probably as popular was Michael Jordan in the short period of time when he was playing for the Kansas City Royals in baseball and the Los Angeles Raiders in football - but of course his professional career as a baseball / football player was derailed by a hip injury suffered during an NFL game.

Jackson was simply a shell of himself by the time he spent one final season in Major League Baseball, playing for the Angels - still, with the help of eBay Bucks that came in handy, the decision was made to splurge on this pick up.