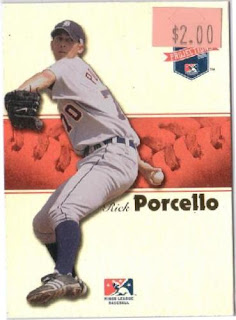 Rick Porcello - the rookie pitcher from the Detroit Tigers showed some moxie in getting into a bean ball brawl with Boston Red Sox star Kevin Youkilis. His stats have been more than serviceable for a 20-year old, though in order to be a dominant starter with the No. 1 or No. 2 label, Porcello seems like he needs to punch out more hitters from the mound. 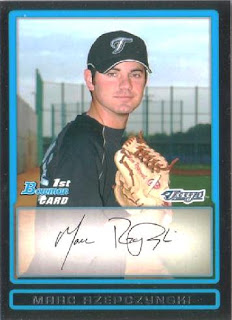 Marc Rzepczynski - the story about this rookie pitcher from the Toronto Blue Jays nearly starts and ends with his last name, though the Southern California native hopes to gain notoriety for more than just the fact his name seems hard to pronounce. Rzepcynski hopes his numbers puts him in-line as a frontrunner for a spot in the Jays' starting rotation in 2010. 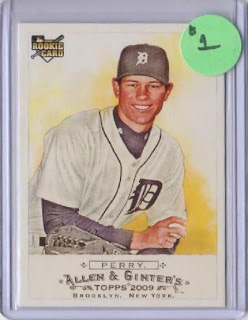 Ryan Perry - he has been more than just a warm body in the Detroit Tigers' bullpen in 2010 and looks to have a more prominent role with the team as a set-up man or even closer in the near future. 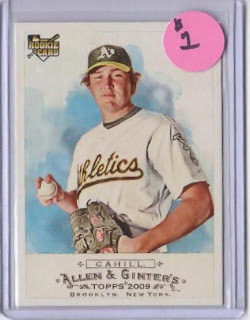 $0.50 - Topps Allen & Ginter baby!
I've cobbled together a 'healthy' stack of Oakland Athletics cards - including these cards I just picked up from a local card show. The Angels are my 'home team,' but the A's are great signers in spring training and during the season when they visit Anaheim several times. 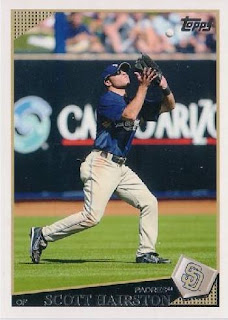 Scott Hairston - I've gotten more than my share of Hairston cards autographed [maybe 10-11] over the last two years and I've only seen him several times in-person. He is a pretty good signer, so I have a card for him to sign when I see him again. He has pretty good pop in his bat, though for whatever reason, doesn't seem like a guy who is going to get a full season of at-bats. 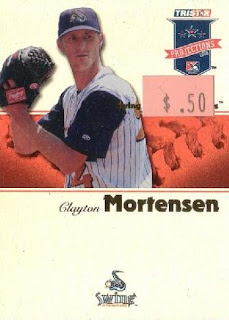 Clayton Mortensen - I've never met him in-person, though I picked up a certified autograph card [2007 Donruss Elite Extra Edition] of him two years ago, because I thought he was going to come up fast through the St. Louis Cardinals system. Was traded with uber [as in uber fat] hitting prospect Brett Wallace to the A's for Matt Holliday. 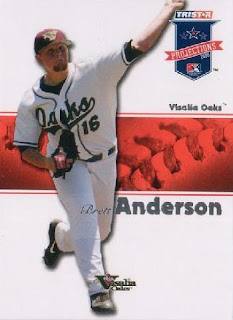 Brett Anderson - the A's star rookie pitcher signed the same card for me already in spring training, but I found the card in the '6 for $1' box, instead of being individually priced at $0.50-$1. 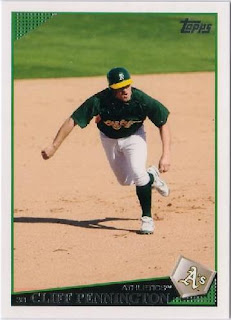 Cliff Pennington - I got him to sign for me in-person at spring training two or three years ago. I don't think he is the player the A's thought they were getting when they drafted him, but the organization is still trying to find a way to make him a useful part of their Major League team. 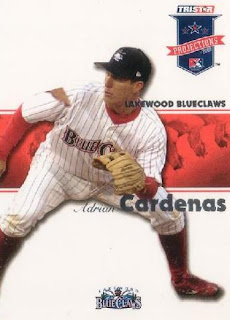 Adrian Cardenas - he should be a September call-up by the A's after enjoying success between AA and AAA.
Posted by Laurens at 12:39 AM No comments:
Labels: baseball cards, in-person autographs, Oakland Athletics, show and tell 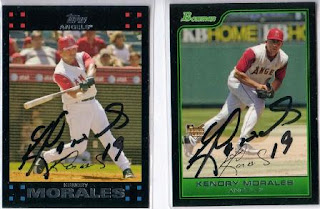 Maybe he is more accomodating in organized events - but it is hard to get his attention in-person. I'm sure he is the dude wearing the sunglasses.

Several months ago, I saw this post on another collector's blog - and decided to send a request to Morales, skeptical he would actually respond to an autograph request in the mail.

Fortunately, the cards got back to me safely and both of them were signed - they look pretty good and Morales is just having a breakout season for the Halos in 2009.

The exclusive agreement - just a reaction

Major League Baseball agreeing to an exclusive agreement with Topps to produce baseball cards seems to say - trading cards have become too important to grown men who collect such things, because of their perceived value and there needs to be some way to dumb down baseball cards so kids will start to like them again.

The agreement is another squeeze in the nuts for the adult collector - one who has genuine interest in cards, its complexities, its history and in all honesty, its monetary value.

Reading Michael Eisner's statements, it is very clear he doesn't want anyone over 12-years old to be collecting any Topps baseball card - I'm an adult collector and once this agreement is in place, I officially will not matter.

Eisner makes what has been going on, in the 'Upper Deck Era' of the last 20 years so sleazy and dirty - Eisner wants to take it back to the 'old school,' where collectors of all ages had no choices and one company can do whatever it likes because legitimate competition will not exist. Upper Deck may still be able to produce cards, because they supposedly still have the MLBPA license, but collectors see trading cards without full licensing from both Major League Baseball and the Major League Baseball Player's Association as inferior.

Now, for collectors over 12-years old, will it be an issue of growing up and forgetting about the little pieces of cardboard - or will collecting baseball cards be something of a 'secret shame,' where adult collectors looking to partake in the hobby, will be doing so in the equivalent of dark alley ways or backrooms.

Maybe picking up a pack of trading cards means less to me these days - but then, I want options, I want to be able to have a choice and feel like I'm not wasting my time with the same old cards. I also don't want to feel embarassed about being a collector.
Posted by Laurens at 10:35 PM 1 comment:
Labels: baseball cards, exclusives, MLB, Topps, Upper Deck 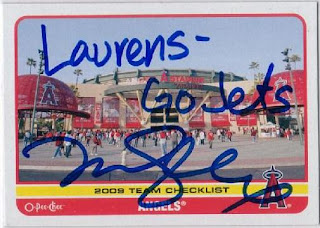 Mark Sanchez was the big man on campus at USC and was the No. 5 overall pick by the New York Jets in the 2009 NFL draft - he made an appearance at Angel Stadium to throw out the first pitch a few weeks ago and towards the end of the game, I saw where he was signing for kids. I knew he'd be making an appearance, because I'd heard on TV, but I ended up bringing nothing of significance to get signed.

When I approached him to get his autograph - he asked for my name and personalized my 2009 O-Pee-Chee Angels team checklist card.

I'm pretty sure I overheard the woman standing next to me [who I think was with Sanchez' party] say the reason Sanchez personalizes - is because he doesn't know where the autograph will be going [meaning they might be sold or whatever].

A person I knew got what I assume was a 'cheap football' personalized and signed - it looked like Sanchez had 'spanked it' letter for letter.

Despite the deal with the personalizations - Sanchez was seemingly accomodating and signed without a problem. The person I knew took a 'photo-op' with Sanchez and I should have taken one as well, but was really 'too shy' to ask for one. 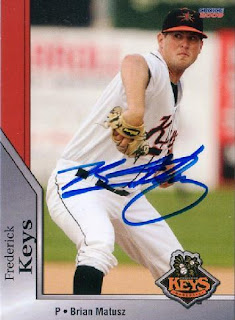 Matusz is considered the crown jewel among Baltimore Orioles' pitching prospects and is likely going to be called up - to make his Major League debut on Tuesday.

I was having a cow looking for his 2008 Tristar Prospects Plus card I pulled from this blaster break last year - I found the card in one binder containing several pages of insert cards. The card was with a random Upper Deck USA autograph insert of Matusz I picked up last year.

I sent an autograph request to him and it took about two weeks to get back to me - ironically the Tristar Projections card I sent was replaced with a card from one of Matusz' earlier minor league stops.

I guess that is fine, since Matusz was wearing dark uniform sleeves on the image used for his Tristar Prospects Plus card - and there didn't seem to be much of a light area to sign an autograph on the card. 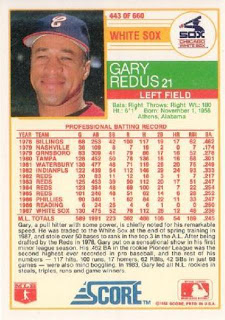 Gary Redus was a moderately successful Major Leaguer - however, a little known feat accomplished by the largely forgettable Redus is that he holds the minors' single-season batting average record.

I suppose he is being honored just a little bit, by being included in Tristar's upcoming Obak set - I looked at the checklist and wondered why Redus would be included. I'm sure collectors who end up pulling his card will be wondering who he is.

As a 21-year old in 1978, Redus- hit a blistering .462 in his professional debut in the Cincinnati Reds' farm system.

Tristar has a chance to hit a home run with their retro set, aimed for those who like the Topps Allen and Ginter - the set features some interesting subjects besides the typical current minor leaguers and top prospects. However, it remains to be seen if the product will be embraced by collectors who do not take minor league cards seriously in the first place. 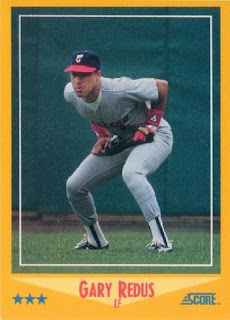 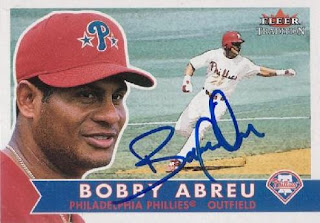 Even with Vladimir Guerrero and Torii Hunter out, the Los Angeles Angels' offense has been rolling because guys like - Chone Figgins, Mike Napoli, Kendry Morales, Juan Rivera, Erick Aybar and even Maicer Izturis have each put together pretty good offensive numbers.

It looks like the spring training offense when you can put up five or more runs on a consistent basis and come back - against opposing teams who have jumped ahead early in the games.

Bobby Abreu has been in the middle of the Angels' offensive attack and one wonders, where to begin with the praises for this savvy veteran - who signed with the Angels with about two weeks left to go in spring training.

Even though the $5 million Abreu is being paid is still a lot of money to the average folk - it was a bargain for the type of player he has been and the type of season he is having now.

Abreu has given the Angels a different type of pure hitter - with Abreu's ability to recognize pitches, adapt to situations and patience [61 walks/an on-base percentage over .400], he can either set the table, but also be a middle-of-the-order presence.

He hasn't reached double digit home runs yet, but he is closing in on another 100 RBI season - while the RBI stat maybe more of a function of the guys getting on-base infront of him, give Abreu some credit for being an RBI machine.

As a batter, he might guess here and there - but even at 35, it doesn't look like he really has lost any bat speed with a batting average currently over .300.

Abreu has been dogged for maybe not being adept defensively and also for not being the best baserunner - but it seems like there maybe an emphasis to be a little more conscientious with the Angels. As a baserunner, he has been opportunistic, stealing 21 bases and only being caught five times.

At this point, it looks like he is going to finish up with another strong season - hopefully Angels fans have enjoyed watching him perform, watch him finish strong and see how much he might want in order to come back next year [or the next couple of years].