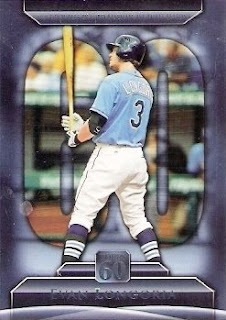 This quote from Joe Posnanski describes it all - he seems to capture what I've thought about the game, particularly with the four teams chasing for the Wild Card on the final night of the season. 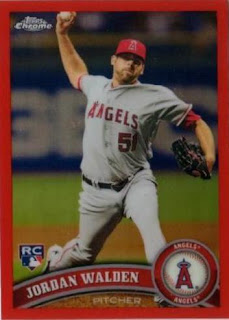 I was able to pick up this Orange refractor of the Angels closer from Brian at Play at the Plate - in exchange for a Mason Tobin X-Fractor from this pack break.

Walden was thrown into the fire in 2011 and his season went from being impressive as a rookie closer making the All-Star team - to a guy who has some things to work on after two rough outings to end the year.

Unlike the last two great Angels closers [Troy Percival and Francisco Rodriguez] - I don't know if Walden has had a 'mentor' to allow him to develop, like Percival did when Lee Smith was a closer for the Angels back in 1995 and like 'K-Rod' who watched Percival close out games, before taking over closing duties for the Angels in the mid 2000s.Walden is still a young guy and perhaps the Angels can go out and sign at end of the game reliever that sort of helps Walden out - if not really as a 'mentor' type, someone who can close out games as Walden figures things out.

As much talent as Walden has, I don't want to see the Angels burn him out because they don't have any other closing options - instead of hitting his prime in his mid 20s, you might find a guy like Walden bottoming out like the seemingly sad case of Jonathan Broxton, circa 2010-2011. 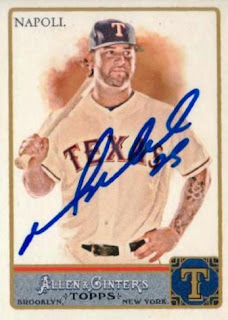 I don't think Mike Napoli was ever going to be the solution at catcher for the team he once played for - but obviously it is his power bat that plays on, not his ability to catch and throw.

After going ape-sheet on the Angels in the last two regular season games in 2011 - he has finished off his season in style and looks to carry his hot hitting into the American League Division Series. 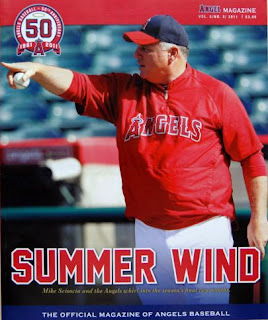 I'd been hoping the Angels would still have some life in them but after losing 6-5 to the Oakland Athletics on Sunday - their opportunity to sneak into the playoffs through the Wild Card seems to have been obliterated.

Even if they sweep the Texas Rangers in their last three games - the Angels would still have to hope Tampa Bay and Boston lose the rest of their games to make things interesting.

I can't look past the fact the Angels are not making the playoffs but manager Mike Scioscia has done a credible job in leading his 2011 Angels - rebuilding with young kids who emerged as team stars and seemingly overachieving, winning nearly 90 games despite not having what seemed to be a 'championship caliber' team.

The team to beat in the American League West is obviously the Texas Rangers - they are the ones who ended up with former Halos fan favorite Mike Napoli, while the Angels got a broken down VW. 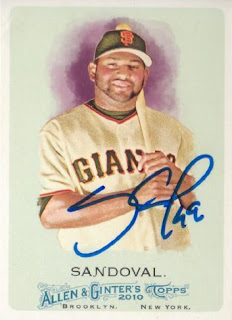 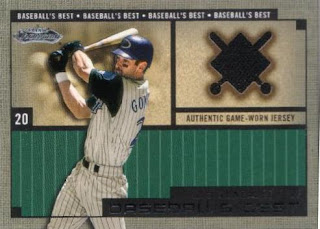 I didn't think it was unreasonable to hope for one or two cards at least 40 years old - but all I got was four s[crap] cards from the late 1970s, cards I really would throw away otherwise, but are my supposed 'prizes' from repacks like these. 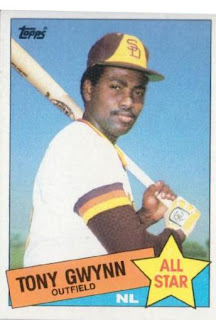 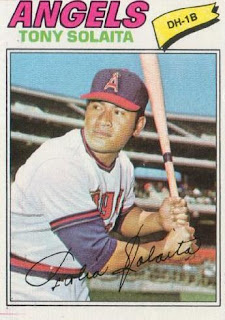 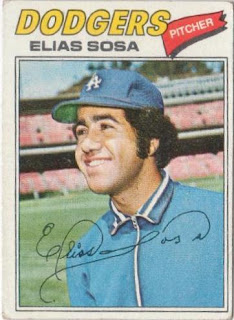 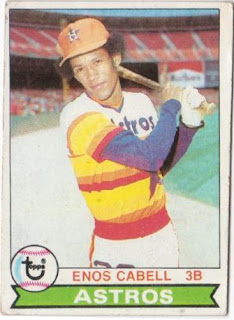 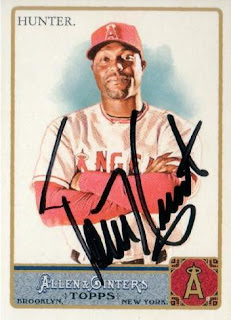 Torii Hunter has had a fine season despite a midseason slump dragging his overall numbers a little bit - it is tough to say whether or not the Angels will catch the Texas Rangers, though I hope Hunter finishes the 2011 season strong with the bat and the glove.

After their 'dud' game against the Baltimore Orioles Friday night - the Halos need a swift collective kick in the butt. 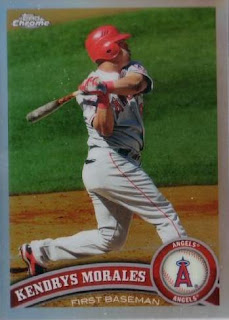 Pack two
#80 Joe Mauer
#89 Gaby Sanchez
#99 Kendrys Morales - refractor; with the emergence of some Angels rookie at first base, Morales has been a 'non-factor' for the Angels since the middle of the 2010 season.
#179 Marcos Mateo 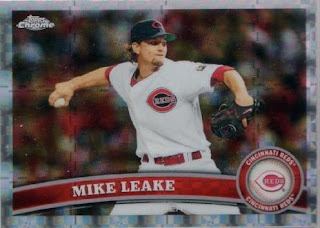 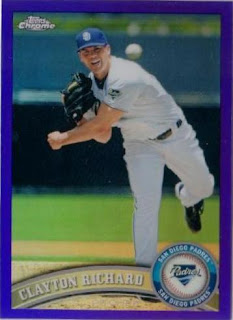 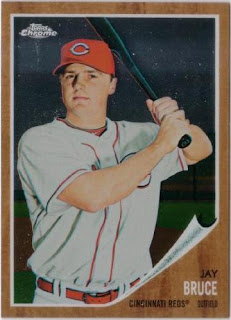 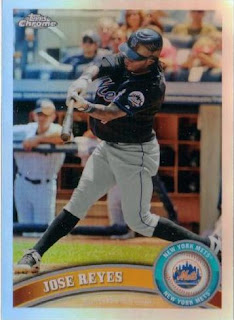 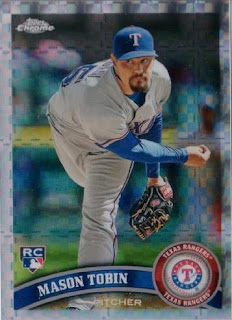 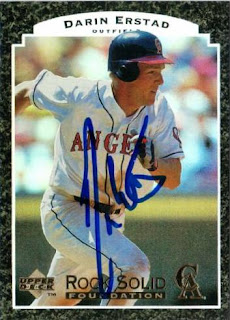 I was sort of scheming around on Labor Day, thinking all the gates at Angel Stadium might open at the same time for a 6:05 p.m. Angel game - if I can go in through the back, I could probably beat the rush for the autographs wristbands passed out for Darin Erstad, who was throwing out the first pitch.

A couple of buddies were already in line at the Home Plate Gate, so I decided to walk to the back and explore - I saw Ichiro dropped off down the tunnel where visitors go through and I think I got a faint wave from the bottom as I called out to him.

I didn't see any security or anyone by the gate at the back of the stadium - as I was standing around, I actually saw Erstad carrying his son as he walked to the Angels' offices.

I'm flipping through my autograph book, digging out my Erstad cards [I figure he'd do two and even if he did more, I'd get the ones that were my priorities at this point] - I approach him to ask him to sign and he put his boy down and nods towards me.

Erstad signed a 2005 Topps Turkey Red and a 1997 Upper Deck Rock Solid Foundation insert - signed; the Upper Deck insert maybe worth a dime today but it is my favorite Erstad card because it is shiny and I probably pulled it when Erstad was still considered a rising star. 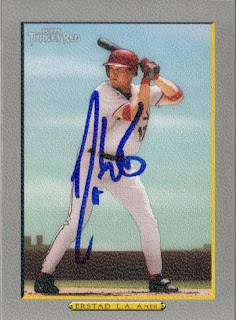 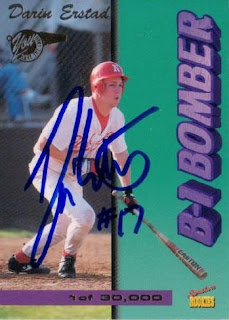 I go back to buddies to see what is up and head to the back a second time - I'm still trying to use some chicanery here and there was just a group of about four or five people waiting at the back of the stadium.

It looks like they had stuff to get signed for Erstad too, but they found out the gates in the back were opening at 4:30 p.m. - Home Plate gate was the only one opening at 4 p.m., so it was off to the front, again.

After heading into the line where my buddies were, it was off to the races once the gates opened - I don't know what compelled me to nearly kill myself trying to get a wristband for another Erstad autograph.

I crumpled my ticket as I straggled towards the line just because I was going to collapse - I'D GOTTEN ERSTAD TWICE ALREADY, DID I REALLY HAVE TO DO WHAT I DID, JUST TO END UP WITH A THIRD ONE?

I got my wristband, but ended up stumbling around to sit in a couple of places out in the right field concourse to try and chill out - this was all unbelievable, if only because I got caught up in the rush and was paying for it.

For about 40 minutes during the early part of batting practice, I threw up a little and struggled to regain my composure - I was gassed and didn't feel any better until towards the start of the game. 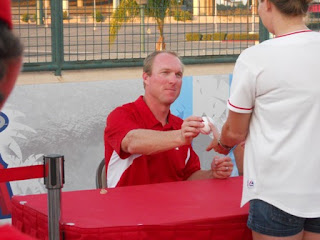 During the game, I made my way to the line for Erstad - the card I was going to get signed was a 1995 Signature Rookies B-1 Bomber card; it pictures Erstad in his Nebraska uniform and I think it is a cool card, even though it was probably another way for an unknown trading card company to cash in on 1995's No. 1 overall pick.

As intense as Erstad was as a baseball player, he seems to give off an even-keeled vibe - I would think with his reputation, he'd sort of have more of a gruff personality.

I asked Erstad to use my Sharpie when I approached him and the Angels handler [for the first pitch signers] mumbled, "now he is going to want you put his number..."

What a good idea, so that is exactly what I had him do- he did it without a problem and I was fortunate to end up with three Erstads in one day. 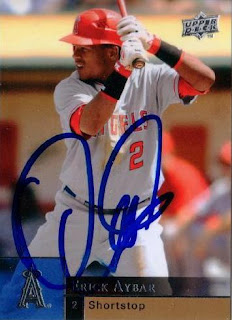 Angels shortstop Erick Aybar was 4-for-5 with run scored in the Angels 6-5 loss against the New York Yankees this past Sunday - it looks like his up-and-down offensive season is back on the upswing this final month of the regular MLB season and despite his offensive shortcomings, the Angels are going to need a spark from him either hitting at the top or at the bottom of the lineup. 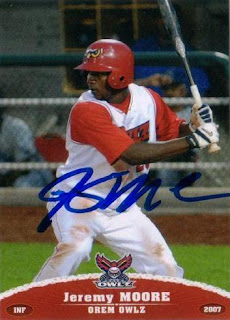 When I got Jeremy Moore to sign a couple of his cards [same ones] on Monday, I didn't realized he had already logged a Major League at-bat with the Angels - the September call-up has seen little action so far, but did score the go-ahead run in the Angels 3-1 win against the Mariners last night.

The Halos lack of pop is particularly grating in the heat of a pennant race - but everyone would rather be watching a team still playing for something in September, rather just playing out the schedule.