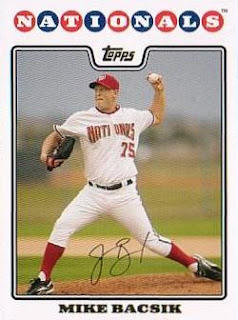 Pack one
# 189 Esteban German
Checklist
# 133 Mike Bacsik - I'm looking for certain cards featuring just the right image captured on cardboard, the right graphics to make the image standout. It may or may not evoke something, but the card just symbolizes what a baseball card should be.

# AR 9 Mark Ellis 50th Anniversary Topps All-Star Rookie insert - it is a pseudo retro design, which I tend to like. I think I like the idea of being able to pull retro themed inserts, because they are quaint and it makes me feel like I'm pulling a card from Topps' rich history.
# 186 Lastings Milledge
# 294 Brian McCann
# 45 Dontrelle Willis - a nice, seamless airbrush job.
# 117 Boof Bonser
# 28 Kyle Kendrick
# 200 Manny Ramirez
# 241 Ervin Santana

Comments - Topps is the product you grab when you don't have time and you are on the go. Besides the gimmick cards [Kazuo Uzuki and Rudy Giuliani anyone?], it is the same old cards you'll find at your show's commons bin [in due time].

Posted by Laurens at 8:02 PM No comments: 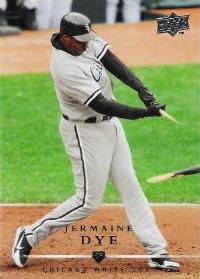 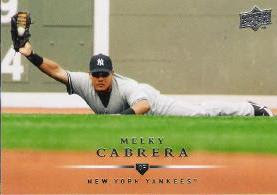 1.) So what [?] - you realize they are such a small part of the experience. It is just another pair of baseball card releases to mark another year gone by. You are almost too sophisticated to care about new cards just because they are marked '2008' on them and they are the first products out. The stats on the back of the card don't matter because 'currently' you have numbers and numbers available on the Internet.
The excuse of picking up cards to check on 'updated' stat lines for your favorite players are obsolete - you may want to build a set, but with new products coming out, doesn't last past spring training.

2.) Lack of updates - you understand how these sets are essentially planned and probably printed in advance. On the other hand, a product nearly devoid of any updates [traded players, free agent signings] from the past off-season is just discouraging, especially when you are eager to bust some packs just to see what the 'new' cards look like. 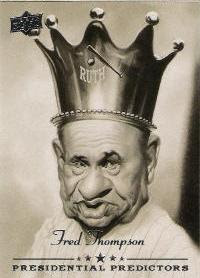 4.) Gimmick cards - the 2008 Upper Deck Presidential Predictor cards are sort of 'out there,' since it takes a more satirical stance, rather than a 'conservative, this is your father's insert' stance. I don't know how original the idea is, but UD seems to go for sensationalism [only if to copy Topps' efforts from past year or so].

5.) Using similar images - Upper Deck still does a good job of mixing things up and featuring cards with 'personality shots,' but it seems like they tend to put in a fair share of the typical, 'hitting, running, pitching, baserunning' shots, along with 'useless' cards [to the autograph collector who cares about aesthetics] featuring a 'boring studio shot,' of a player wearing a dark, batting practice jersey or using a card featuring no 'light' space at all.
Posted by Laurens at 4:49 AM No comments:
Newer Posts Older Posts Home
Subscribe to: Posts (Atom)