The autograph/GU are low-end, but for less than a pack of 2007 Tristar Elegance minor league baseball cards - I got three certified autograph cards from the product [Sweeney, Antonelli and Marrero] and one game-used/worn jersey card [Wood]. I also got a couple of other GU cards [Blalock - hoping to get it signed randomly in-person or in the mail] and Giles [he probably got off the juice, but it is a patch card anyway].
Posted by Laurens at 3:30 AM No comments:

A baseball card collecting lifer - I'm just a baseball card collecting lifer, a guy hitting close to that halfway point, but still bent on building the best collection from a perspective of a 12 or 13 year old. Sometimes it isn't about the player pictured on the cards anymore, because I'm not 12 years old and can't relate to multimillionaire professionals as I did if I was an adolescent. Still I wouldn't be collecting baseball cards if it wasn't for the players. Obviously there is still a draw to the sport of baseball as a fan and card collecting as an obsessive-compulsive hobby that I can probably explain, but probably do not understand at times [anymore].

It preoccupies my time when I don't want to deal with the real world.

Today, you have a list of bloggers sharing their own esoteric takes on what the cards mean to them - it makes me feel great because when you find others out there like you. It is uncanny how you can read their stuff and relate.
Posted by Laurens at 2:36 AM No comments:

So after many years of being a pretender and essentially being a non-factor in the National League West - the 2007 Colorado Rockies forced themselves into the playoffs and found themselves sweeping through the division and championship series to reach the World Series.

I can't say I'm a fan or a guy hopping on the bandwagon, but their run was something to watch as far as different players contributing [Kazuo Matsui, probably most of the team at different points in the last two months] and a guy being hyped up [Troy Tulowitzki] as the guy who has arrived to be the next 'superstar' shortstop in baseball.

1.) 2005 Topps Allen and Ginter Matt Holliday mini card - he probably should be the MVP of the regular season, considering he played like a captain all-season long [sorry Todd Helton] and is now the face of the franchise. He took the NLCS MVP trophy home and 2007 is about a World Series win from the best run Holliday will probably have in his professional playing career [as an individual player and as part of a team]. I have a handful of Holliday cards, including two cheap 1999 Topps Stadium Club rookie cards and maybe a couple of through the mail autographs. I scanned the A&G mini just because it was one of those oddball sized cards 'sticking out.'

2.) 2003 Upper Deck National Pride Seth Smith jersey card and 2004 Bowman Draft Seth Smith rookie card - I pulled a jersey card of some guy named 'Seth Smith' from a 2003 Upper Deck pack that was packaged with four other packs in a blister at Toys R' Us [sale for $2.99]. I didn't really know what to do with the card or knew much about the player. Fast forward to 'actober' and Smith was another one of these Rockies players who came through [not in the clutch, because 'clutch' apparently is an outdated term] at the right moment, when his 2-run bloop double was the key hit in the Rockies' National League pennant clinching 6-4 win over the Arizona Diamondbacks.
Posted by Laurens at 6:05 AM No comments: 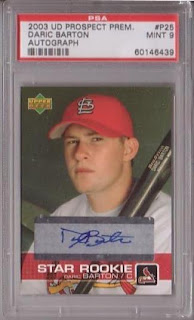 2003 Upper Deck Prospects Premier Daric Barton auto #P25 [$36.65 plus $5 s/h off Ebay] - it is always great to hop on some young rookie's bandwagon, even though you plod along in the desert before you finally would pick up a guy's key first-year certified autograph card. This guy plays for a division rival in the American League West, but has local county roots [Orange County California].

1.) I've seen him hit a few times [spring training on TV/some video clips posted online] - while he seems like a roly-poly type, like many lefty hitters, he has a sweet swing [particularly when he drives the ball]. The 22-year old hit .347 with a .429 on-base/.639 slugging percentage in 72 at-bats in his 18 game cup of coffee with the Oakland Athletics this past season.

2.) I think he could be Nick Johnson and/or Mark Grace type - hopefully not injury prone like Johnson. With Barton's ability as a pure hitter otherwise, do the high average, slick-hitting thing with more pop than Grace.

3.) Ultimately, he could be a notch below, what Jason Giambi was in his Oakland [juiced up] prime - a guy who will hit for a high average, including 25-30 home runs a year, have a great eye at the plate and drive in a bunch of runs.

4.) Speaking of rookies, top prospects and speculating on young players - who doesn't want to collect some key cards of young hotshots who actually make good on their early promise? It is harder to get on the bandwagon game however, when you can't buy a decent card for under $40 it would seem [that is decent, not the best card].

5.) What happens when it doesn't really matter? I think you have to make decisions based on conservative projections - I pick up cards not to flip, but to put in my personal collection. It might be all fun when you pick up a card, but know when to dump it if the player starts to fizzle quicker than anticipated. How good is a particular guy supposed to be? Hall of Fame good or merely a guy that is in the Hall of Very Good. Just in five years, will you be happy with this particular purchase, if it is obvious Barton is going to be overshadowed by better players? How are you going to flip the card, if it isn't a 'PC' quality single anymore?

6.) Take note a sample list of the who's who of players were considered top prospects or future stars but disappointed over the past 10 years - who are the 'who's next' prospects and the 'who's now' prospects who are having banner rookie seasons that are going to disappoint? 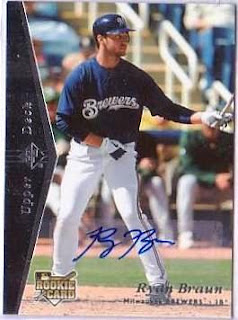 2007 SP Rookie Edition Ryan Braun auto #153 [$40.00 BIN plus $6 s/h off Ebay] - first it was Hunter Pence burning through the National League, then it was Braun showing some prodigious hitting skills and through the last week or so, it has been the Colorado Rockies' Troy Tulowitzki getting the pub from a lot of the mainstream baseball media.

1.) I was nervous about getting the card since I sent payment for it on 9/24/07 - instead of immdiately after I hit the BIN on 9/15. It came rather promptly in my opinion however.

2.) It is a personal collection card I guess - I like the 'old school' design and was looking to get a key autograph insert from the product. I'd rather pay $46 for a single than $55 for an unopened box of SP Rookie Edition, where I only have a chance of pulling a Braun, Pence, Tim Lincecum, et al.

3.) The question is - will this be my worst purchase since I picked up a 2000 SPX Winning Materials Troy Glaus for about the same price in 2000? His true rookie cards from 2005 are more valuable and while his 2005 Bowman Draft Chrome autograph has skyrocketed in value, I didn't get into the bandwagon then. I could have at least picked up his 2005 Sterling autograph, since it was initially cheaper. I also remember a local promoter doing a signing with this Braun and leftovers of signed 8x10s of Braun [pictured in his Miami Hurricanes gear] for about $4-$5.

Hopefully Braun can avoid the sophomore slump and even if he doesn't win the National League Rookie of the Year, can build upon the numbers he has posted this past season.
Posted by Laurens at 10:40 PM No comments:
Newer Posts Older Posts Home
Subscribe to: Posts (Atom)