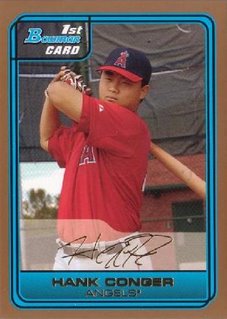 Stopped by Target yesterday night to see if they had any 2006 Bowman Draft Picks and Prospects.

I think it is natural habit to look for some new product, featuring cards of players in their professional playing infancy, just t get some new baseball cards in my collection.

I think Topps is the only company that still can put recent draft picks and other minor league prospects into new baseball card product.

2006 BDP was on the card shelves. I hoped that they were fresh boxes that haven't been tampered with.

When someone tampers with a blaster box, it is usually consists of buying a blaster, gutting the contents of the original product, filling it with junk cards, resealing the package only to return it to the store.

2006 Bowman Draft Picks and Prospects blaster breaks [x2 @$19.99 each] - seven packs plus one bonus pack in each blaster box.

Colton Willems refractor - the Washington Nationals No. 1 draft choice in 2006, whatever that really means

Hank Conger gold filler insert - it isn't the ideal Conger card from the set, but it is my first card of the LA Angels' No. 1 draft choice in 2006. 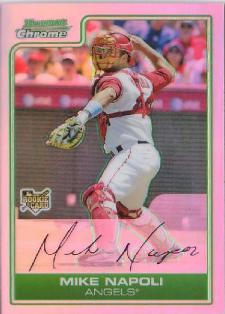 - notables
Mike Napoli refractor - don't know if this is a true rookie parallel or not.

Tyler Colvin base chrome - he was a surprising No. 13 overall pick in the 2006 MLB Amateur free agent draft. I could have gotten his autograph in-person if I wanted to when he and his Clemson baseball team were playing in the 2006 College World Series. 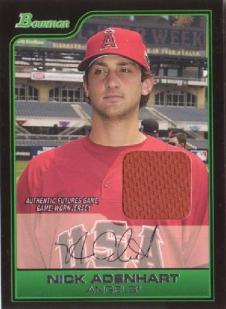