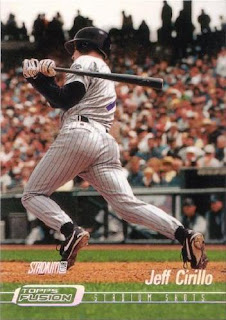 The first thing sticking out is Cirillo's behind - his face is also obscured, which may or may not detract from some card's appeal [see how Tony Gwynn feels about his 1983 Topps card].

On the other hand the card shows Cirillo swinging away at the pitch and perhaps you can visualize what is going on - you hear the crack of the bat as Cirillo makes contact and is about to run to first base.

Maybe it is an extra base hit and Cirillo ends up at second base - after battling the opposing pitcher.

On the other hand, Cirillo could have just fouled a ball off to the stands - you can imagine him running out of the batter's box, letting his bat go, only to pause and realize he has to dig into the batter's box once more.

The camera angle makes the image unique - it isn't just a typical 'upright' image of a player shot at the game. It looks like the photographer took the photo from his knees or at least where he can get somewhat low.

Topps Fusion was more of a homage [if you can call it that] to Donruss' 1998 Collections - where you had very slick, very glossy cards featuring cards designs from several brands [among three I can name are Topps Finest, Topps Gallery, Topps Stadium Club]released as one product. The product is similar to 2002 Donruss Originals and also 2008 Upper Deck Timelines.

Though seemingly forgotten, there was a little more premium feel to the cards in the Topps Fusion product - maybe I'm a little off, but I think Fusion was one of those products Topps thought might have some long term appeal. The images used were a little more exciting for the Stadium Club and Gallery releases.

Still, it was more of a gimmicky product - who knows if including cards of the two hot players in 2001 [some guy named Albert Pujols and a 27-year old 'rookie' from Japan named Ichiro] would have done anything for this product.
Posted by Laurens at 11:29 PM
Labels: 2001, awesome action, Jeff Cirillo, Topps Fusion