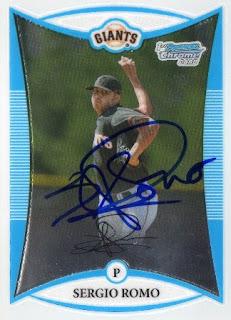 I think it was four or five years ago, hanging out in the morning at Scottsdale waiting for the San Francisco Giants players to come in during spring training - where I got Sergio Romo's autograph.

He was a fairly anonymous Giants player back then and maybe I got him maybe once or twice - I remember a young couple getting a photo op with Romo and I thought, 'oh how cute, these guys are getting a pic with a token member of the Giants - it's too bad at times, only the scrubs like Romo who bother to sign.'

Even though Romo was a set-up man for much of the 2012 regular season, the Giants leaned on him to shut the door in the postseason and he ended up closing out the 2012 World Series as a two-time World Series champ - it's kind of safe to say that things have turned out pretty good as Romo has carved out a nice little MLB career for himself.