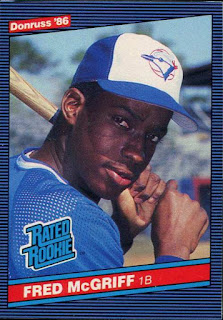 This may not be a significant purchase because there are too many of them - but for my Top 50 common PC, I wanted a rookie of McGriff to group with two certified autograph cards I've picked up over the years.

Here is Sports Illustrated's in-depth look at McGriff's career - the movement for once borderline HOF guys like Bert Blyleven and Tim Raines were championed by numbers guys, but because McGriff falls quite short of the advanced metrics standards for first baseman, he isn't getting the same 'after the fact' support.

While the numbers don't lie, I do think it’s time McGriff gets a serious bump for induction into the Hall of Fame - unlike other sluggers, McGriff numbers never really experienced a power surge through the mid 1990s, yet he still hit 493 home runs as a consistent, metronomic slugger.

Always a McGriff fan. Plus he had such a sweet swing.