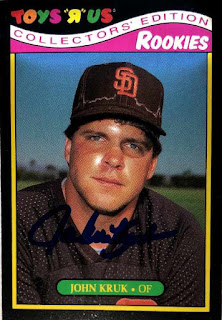 The former MLB player signed my trading cards in about a month c/o the Philadelphia Phillies - the particular card isn't the ideal card to get signed with Kruk wearing a dark jersey top, but it was a random card I plucked out of a card show monster box 'just because.'

Getting the card eventually inked up justified the $0.25 purchase - regardless of how it ultimately looked.

Since he worked for ESPN for 12 years, I've had Kruk's cards in my 'media guys' box for seemingly the longest time - then moved the cards over to my Philadelphia Phillies box when he was hired as part of the broadcast team.

Because I was never able to get the chance to get Kruk in-person, he became a 'scratch the itch' guy for me - especially when I saw some TTM successes posted this past season.

When Kruk was on ESPN, particularly on the Sunday Night Baseball crew, I may have seen him in-person a grand total of one time and he didn't feel like signing - the same time, I think I did end up getting former teammate Curt Schilling, so regardless of everything else, the former MLB ace was a slightly better get than the slick hitting, portly fan favorite.

I'll have to see if he will return a ChiSox card.