Whenever I think about losing a card somewhere... 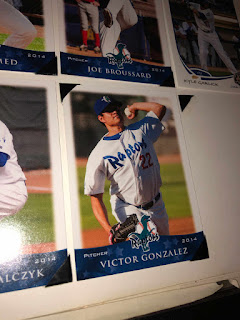 I start to hate myself because my claptrap is just a mess - my collections consist of loose unsigned cards, loose signed cards; boxes and boxes of stuff I can’t figure what to make of.

At times, I get this itch to dig out a random card, but don't know where it ended up and I worry it's lost to oblivion - most of the time, it's not some high valued PC card I'm freaking out about, but a card worth a quarter or a dollar at most.

This time, I was trying to figure out where a 2014 Ogden Raptors Victor Gonzalez card ended up - maybe the Mexican lefty didn’t just come out of nowhere, but to reach the big leagues in 2020, Gonzalez took the scenic route through the Los Angeles Dodgers system.

I bought the Raptors team set years ago because it had what I think was Cody Bellinger’s first minor league team set card - I wanted to have an early pro card of the hot rookie back in 2017.

I didn’t know who Gonzalez was, but took note when he was at Rancho Cucamonga for part of the 2019 season - most minor leaguers from a minor league team set end up being cut and five years after the fact, it was funny to have a card of a guy still jugging along.

In a closet, I looked through my assorted bags that made up my 2019 spring training trip - the card wasn’t there in my main Los Angeles Dodgers binder.

I always try to believe any card I'm missing at the moment isn't really gone - but logically somewhere relatively safe, even if I don't have it handy.

I thought must have the Gonzalez card a tiny loose pile somewhere on the dining room - where it was obscured by the other cards that accumulated.

I dug around through the boxes I’d brought to my room from the dining room - servicing as other temporary places I’ve squirreled some team related cards away.

I decide to dig around through the closet again because sometimes I don’t take the time to look through things - go figure, the card was in a binder I’d prepped for some Dodgers backfield action, specifically the day when Corey Seager was playing in one of the minor league spring training games.

I probably looked through the binder at least once already but missed seeing the Gonzalez card the first time around - I took the card out of the photo corners and placed in a plastic sheet in the binder, so the surface is protected a little bit as opposed to being left as is for probably a few more years.

I run into the same issue all of the time. As much as I think I'm fairly organized I have thousands of cards that are scattered in a variety of boxes. I'd love to one day be organized enough to find any card whenever I want... but not sure it'll ever come to that. Glad you eventually found the card. I feel like the majority of the time, I come up empty handed.