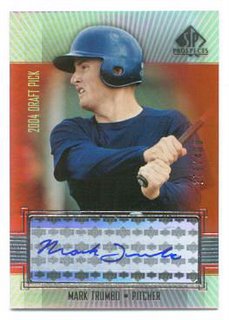 Trumbo maybe the next top prospect in the Angels' organization in the next couple of seasons.

While I wasn't particularly enamored by the card [not having it 'in-hand' before] and I don't think it was any bargain of sort - I felt compelled to pick it up for my personal collection because it is Trumbo's best rookie card [that isn't a rookie-year parallel].

The image is from the Ebay auction I won.
Posted by Laurens at 8:52 PM