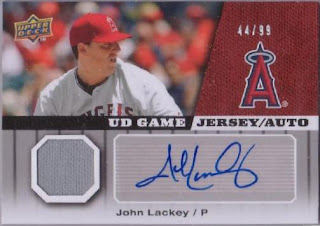 I was lurking around on Ebay and saw this card - I'm not going to say this type of card is hard to find, but I figured it was worth picking up for the price of a blaster box of 2009 Upper Deck.

I might not get to see all the new 2009 Upper Deck base/parallel/cheap insert cards I would have pulled from a blaster - but it is always nice to have a nice, looking insert of a prominent player from my hometown team in-hand as opposed to flipping through cards you'll see soon enough in healthy quantities.

Lackey is a franchise star and the 'bulldog' ace of the Los Angeles Angels of Anaheim - even though he is more of a national semistar.