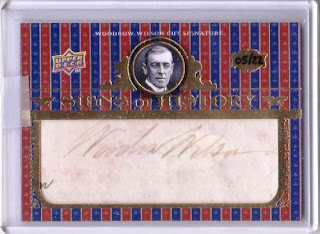 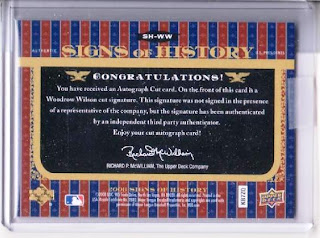 I was dreaming about something as I slept on the couch - I heard the faint ringing of a doorbell and knock on the door. I ran as fast as I could to the door, so I could sign for the package.

All I cared about was securing what I assumed - was my redemption from Upper Deck in my hands.

It looks like a bubble mailer was mailed from Upper Deck's offices in Carlsbad - I had thought everything they did was in Nevada.

I was hoping to get someone infamous [maybe Richard Nixon] or someone iconic [maybe John F. Kennedy] - I'm not sure if Woodrow Wilson, the 28th United States President can be squarely pidegonholed into either category, but his cut autograph card [serial #'d 05/22]was the one that popped out of the bubble mailer, housed in nothing but a thick-card top loader.

What stuck out in getting this particular certified cut autograph card is during a time when the United States has taken one step forward in having its first African-American President in Barack Obama - Wilson was probably the symbol of 'institutionalized racism' in the United States during the first part of the 20th century. Even today as the United States is more a melting pot, it gets to be a volatile one due to racial issues. Wilson's views and actions may not be at all flattering or qualities to admire his life for, but something part of his legacy as a United States President.

I'll be busting 2009 Topps and 2009 Upper Deck soon enough - nice to see Upper Deck on the ball and sate my collecting impulses by fulfilling my redemption in a short time.

I initially thought I'd be getting a more common cut from this list of baseball players - but then my mouth started watering when I saw this and this. It was a mystery redemption, where all I knew was I was going to receive a certified cut autograph card of a former United States President.

I don't know if the redemption ended up as a 'holy crap' pull that is a collection centerpiece [anyone have a 2009 Topps Vladimir Guerrero super patch card]? - but there is definitely a lot of history behind the cut autograph and hopefully it will be in my personal collection for a long time.

That's really cool. If anything, Wilson was the President during WWI, so he has that going for him in the history books. Nice card!