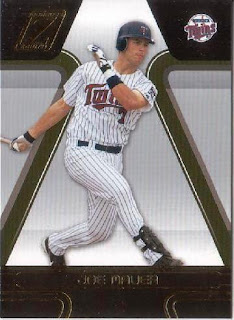 After winning his first MVP award, what can be said about Joe Mauer that hasn't been uttered already - he is the best player in the Major Leagues not named Albert Pujols.

Because Mauer is behind the plate as a catcher - the numbers he generates is simply more impressive. Mauer is simply a once-in-a-generation talent that can probably win the next 10 MVP awards if his health dicatates it.

What stands out is this past year, Mauer won his third batting title with a .365 batting average - I realized he was a very good young player, but it didn't dawn on me that he was that good of a hitter.

Batting average maybe overrated in some respect, but to battle every day with pitchers, to make enough contact or lay off just enough pitches to have prolonged success - while enduring the bumps and bruises received from being a catcher, must make Mauer some sort of Superman among his peers.

Besides batting average, Mauer's on-base percentage was a whopping .444 - he finally turned the power on, hitting 28 home runs and slugging .587 in 2009.

Admittedly, I'm not much of a Minnesota Twins/Joe Mauer guy - but I'll be paying to watch him play opening week of the 2010 schedule, when the Twins open up in Anaheim.