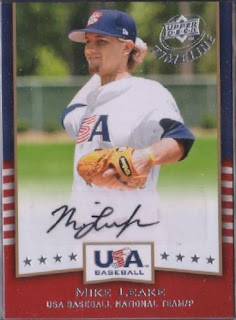 The No. 8 overall pick in the nation in 2009, Leake is a relatively undersized pitching dynamo - who has the ability to be on the fast track to the Major Leagues after a stellar career at Arizona State.

This card featuring Leake on the US National Team is from a 2008 Upper Deck Timelines insert set - lurking around to find some 'bargain bin' type cards, I purchased the card at a card show for $5.

The card features doesn't feature Stephen Strasburg, but it isn't a bad pick-up - if Leake works to fulfill his potential in the near future.