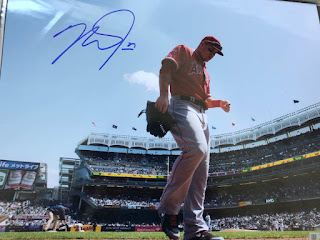 I thought Houston Astros star Alex Bregman might have done enough to secure the 2019 American League MVP - but Trout was the choice all along despite playing for a non-contending Angels team and missing much of the last month of the year.

Trout now has 3 American League MVP awards and counting - he's always a contender and tend to feel like it has been a disservice to see he doesn't have more MVP awards on his mantle.

It seems the MVP award is narrative driven at times and open to personal interpretation by the voters - but with the emphasis on the supposed cold, hard numbers, as long as Trout maintains his status as the best player in the game, the baseball writers aren't going to whiff on making him a perennial MVP winner.

One of my favorite things is that Trout tends to win the MVP when he has "down" (relative to Mike Trout standards) seasons from a pure stats perspective.

What's wrong with narrative being a factor? "Cold hard numbers" are just that - cold and hard. Most of us don't watch baseball for just the cold hard numbers.