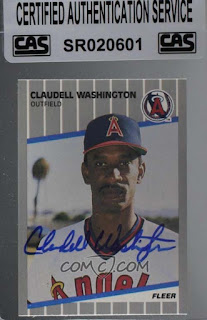 I would have thought Washington was a longtime California Angels player when flipping through his 1990 junk wax era cards with the team - but the outfielder, who recently passed away only really spent the 1989 season and part of the 1990 season with the Angels.

It seemed like years ago, but only earlier in January, where I went through my miscellaneous box of cards featuring Angels players I don’t have an autograph of - I had some unsigned cards of Washington, but sending one through the mail may have cost at least $15, through a glorified middle man.

I might have been bored and adding a little bit of spending money to my COMC account, relented to pay $6 for a random signed card of Washington - particularly on an Angels card likely supposedly certified by a third party authenticator that I’m not really familiar with at all.

Maybe I should have paid the premium for the secret address to send Washington TTM but I'll take my chances that the autograph I did get is otherwise authentic - there is a seal affixed on top of the semi-rigid holder and according to the fine print information printed on the back, if it is ‘tampered with or broken,’ the certification [spelled certiification on the label] becomes invalid.

Once I get the card in-hand, I’ll probably risk 'decreasing the value' by taking the card out of the holder - to add the Washington autograph with my other signed Angels all-time cards.

Sad to hear about Washington, but a nice addition to your collection. I think Washington's autograph might be one that I'm lacking as well.

I saw the sad news yesterday. It looks like he only has one certified autograph out there and it's one of those cut signatures from Leaf. I'm kinda surprised Topps never had him sign for the Fan Favorite sets. I feel like Braves and Yankees fans would have loved owning one of his autographs. Personally... I would have liked seeing him representing the A's. Rest in peace Mr. Washington.