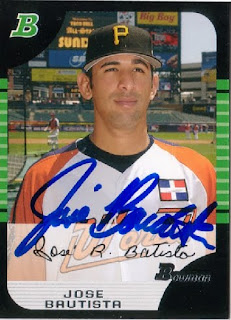 Led by Jose Bautista, who has hit nearly 40 home runs in what has clearly been a career year - the Toronto Blue Jays have bashed and smashed their way into a respectable baseball club, despite being obscured in the American League East.

Coming into the 2010 season, Bautista had bounced around as an 'every day' utility player who reminded me of this guy - now Bautista probably will get an opportunity to secure a pretty good contract for himself.

All I can say is when a guy is enjoying a breakthrough season or surpassing what he has done before - it is kind of exciting jumping on the bandwagon, particularly when a particular guy is hitting home runs all over the place.